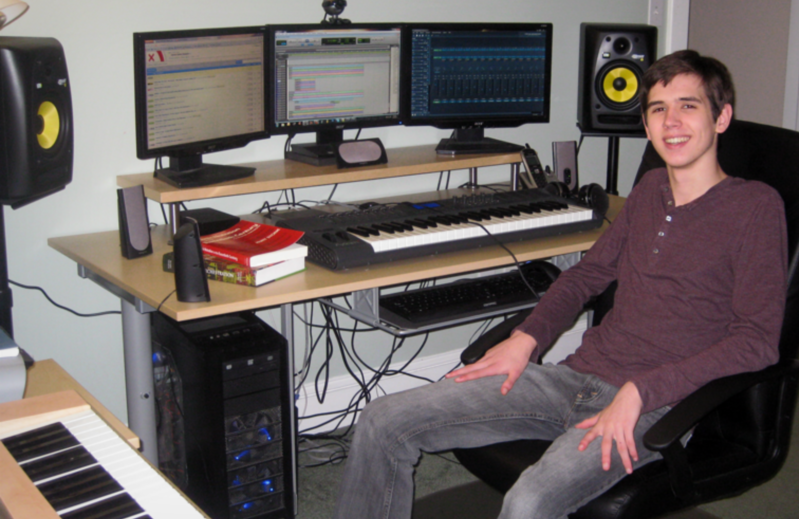 While the task countdown to the next PZ update release ticks down on the forums, we thought it a good moment to have a chat with one our favourite contributors to the game. Zach Beever is the Project Zomboid music man, he’s a mere sixteen years old, he’s from Maryland and we feel extraordinarily lucky to have him in our ranks. To check out more of his work, why not go and smell the fresh paint on his brand new site www.zachbeever.com? And yes, you read that right, he’s sixteen. (Well, he’ll be seventeen on 11th February… but still…)

Q. When did you first get interested in writing music? What instruments do you play yourself?

I actually didn’t listen to any music up till a little over three years ago. It’s hard for me to believe that now that I’m pursuing a career in music composition, but it wasn’t till I took piano lessons in the fall of 2008 that I became more interested in music.

One day, about half a year after I started taking lessons, my teacher told me how he loved the Lord of the Rings soundtrack. He played some of the piano reductions for me and I was blown away. Since then my interest in different genres and styles of music has branched out, but that initial feeling I got when I heard the Fellowship theme inspired me to learn how to compose.

As for instruments, I only play piano, but I love it. I have nearly as much fun performing a piece as I do writing one.

Q. What new tracks have you written that are being included in the next PZ update? What was your approach to writing them?

I’ve written eleven new tracks since the last Zomboid update, though two may have their appearances postponed until a later date. Of the nine that I know will be in the next update, six are ambient, two are fighting and/or escaping, and one is “Oh shi…”

My approach in writing them is similar, but I think there’s a difference in maturity between these pieces and my first. Not to say that I don’t like the first group of pieces I wrote, I do, but I improved a lot in the break between updates. In fact, I’ve improved just as much between the time I wrote the newest batch of tracks and now, so I’m excited to experiment and see what I can do with future requests from the team.

Q. How did your fate and that of The Indie Stone find themselves intertwined? What attracted you to Project Zomboid?

I talked to a few guys in the game business in early 2011 and they all told me to do the same thing: find a project that needs music and jump on the opportunity. I was sending out a few messages to various solo developers over on the tigsource.com forums when a friend of mine, Olli Laine (who writes some kickass music and puts it on his Soundcloud account), told me to send a message to the Project Zomboid guys.

I had actually seen the thread for Project Zomboid on the Facepunch Forums earlier that day, but I figured it was too big of a project for a first time composer like me. Nevertheless, I sent Lemmy an email telling him that I’d love to do the music for PZ and since I’m a start-up, I’ll do it for free. I wasn’t expecting the best news, but it couldn’t hurt.

Signing into gmail, I found multiple emails from Lemmy later that day telling me I could come on board and write the music for the game. I was incredibly surprised and excited. Hell, I’m still excited to have this great opportunity, especially for a game like Zomboid. The team has even paid me, which is more than I ever expected and I’m extremely grateful for it. I don’t know how many times I’ve talked with my friends about how it’d be so great to play a true zombie survival game – I never thought I’d be working on it.

Q. How do you write and record the Zomboid music?

There are actually no live recordings in any of the tracks for Zomboid, though that would be awesome. Instead, I use a sequencer (first it was FL Studio, but now I use Pro Tools) or Finale to compose the music and a lot of EastWest products and the Vienna Symphonic Library Special Edition to ‘record’ them. EastWest and VSL are basically a huge collection of recorded instruments that I can tweak and use however.

Q. What’s the creative process when you’re writing a piece of music for PZ?

Q. Do you know exactly how your music would be used in PZ? Or do you leave it to Lemmy and Binky?

The guys will usually ask me to write a piece, or a few pieces, for a specific part of the game, so I know what each of my tracks will be used for. That being said, I don’t know exactly how it’ll be implemented, but I trust the Zomboid team with that.

Q. What are your career plans? What do you hope to do over the next few years?

I’d love to write music for film and games while having the freedom to explore both concert and avant-garde music. Over the next few years I hope to get into a four year university, get a few new composing jobs, and learn as much as I can about music.

Q. Do you ever tire of people saying how AWESOME your music is? And how much The Indie Stone LOVE you?

Haha. I really appreciate the kind comments towards my music, but I make sure I don’t get a big ego about it. All I want is to do is immerse people into the Project Zomboid world – when people tell me I’ve done that for them it makes me incredibly happy.

Windows of Death and Carpentry

On optimization and time…

Uncategorized | 22 February 2012
Project Zomboid | Copyright © The Indie Stone 2023. All Rights Reserved.
Site by Redwire
Stable Build: 41.78.16 | IWBUMS Beta: 41.78.16 | Version history | Wiki
Follow us
Manage Cookie Consent
To provide the best experience, we use technologies like cookies to store and/or access device information. Consenting to these technologies will allow us to process data such as browsing behaviour or unique IDs on this site. Not consenting or withdrawing consent, may adversely affect certain features and functions.
Manage options Manage services Manage vendors Read more about these purposes
View preferences
{title} {title} {title}