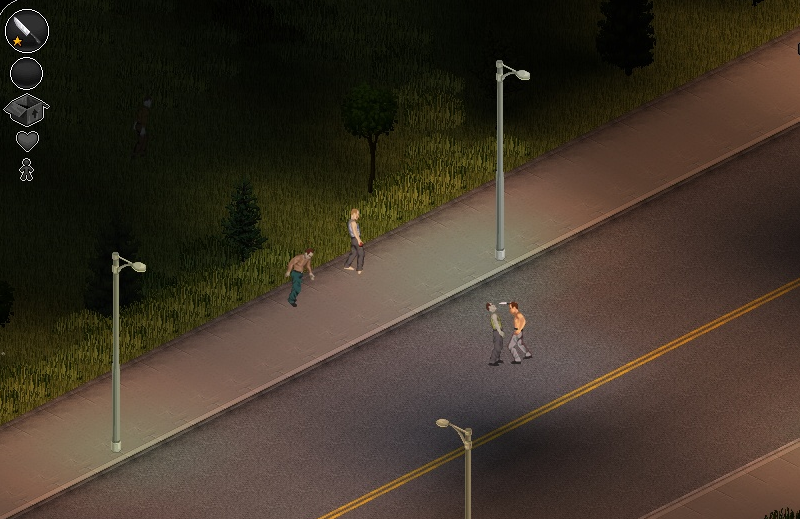 A first foray for the long awaited Public Test Build R is now shambling its way through the forums. Anyone who has bought the game can now (finally) try out the game’s new combat and animations.

After the initial necessary fixes we will be reintegrating fire, rain and the Kate & Baldspot tutorial. In order to expedite release we’ve also had to mute the music after a late bug reared its ugly head – so this too will need a fix. After all this tinkering we will have the content that’ll become the official Project Zomboid 0.2.0 release both on our own website and Desura.

We hope you feel that it’s all been worth the effort, and can assure you that as PZ grows the foundation work done over the past months will pay dividends.

To celebrate the current R build’s release we’re doing a few things with the community. First off we have the chance for UK survivors (or international survivors who don’t mind a plane flight) to win two-day tickets for next week’s Rezzed show in Brighton. The Indie Stone will be presenting a PZ session on Friday 6th July – but will be doing community meet-ups on both days – if people are interested in coming down. We have ten tickets to give away – and all you have to do is post up an answer to a very important question in this thread: ‘If zombies were to burst into the room right now – what would you do?’.

The five best responses by Monday afternoon will be awarded two Rezzed passes, and in the event of more than five people entering (!) we will be asking a Eurogamer staff member (the organisers of Rezzed) for the casting vote – just so there’s no funny business.

Secondly, there’s the return (fanfare) of the Project Zomboid Screenshot Competition. We need images of our new characters and animations to decorate our home page, Facebook group and to appear on the pages of the magazines and websites that choose to cover us. So that’s where you lot come in! As before, we’ll be awarding six prizes – three for artistic merit, and three for accurately summing up life in Knox County.

Prizes will be gaming goodies collected by Will on his journalistic travels – and the last batch we sent out included Duke Nukem Forever Y-fronts, a copy of Crusader Kings 2, a Left 4 Dead cap and a whole bunch of cool t-shirts. This competition will be ongoing, we clearly need images of a fixed K&B story and fire, but we thought we’d open the competition since people are now playing R.

We’ll have Community of the Dead and Phill Cameron’s Modding of the Damned coming up soon, as well as other PZ-based fun, so enjoy your time in R in the mean-time. We can tell it’s a little more crowded in there than you’re used to…