Knox gets real: Spotlight on Binky 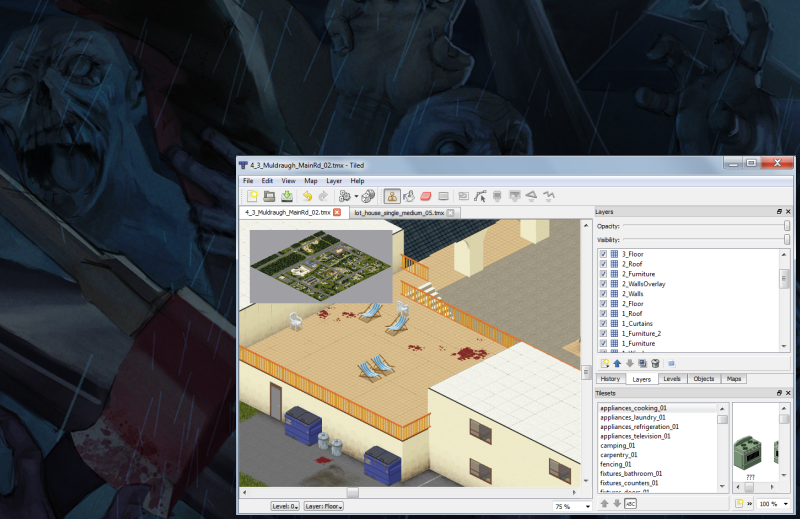 Winter is drawing in on Knox Country. You’ve wrapped up warm, but you’re down to your last piece of rotten salmon. Your only hope of salvation is a Project Zomboid update. Here’s a few more details on its long-dreamt arrival, along with a fire-side chat with Andy ‘Binky’ Hodgetts on the changing face of Muldraugh.

Coding work this week has been directed at the game’s front-end. To this end Lemmy has created lovely new UI menu that’ll let you select maps to spawn on, whether official or user-created, and also boot up your game from a range of savegames. (All save-on-quits, natch). He’s also hugely revamped the username/key input box to make booting up less of a headache. For a sneak peek at the system, Mash’s new menu artwork and some heftily reduced load times – check out this vid.

Hello Andy! How are you today? Have you been down to Costa Coffee yet, or are you popping down in a little while?

Hello. I’m smashing, ta. To be honest, I’ve not been to Costa in some time as I have abandoned the delicious gingerbread lattes in favour of a small Italian cafe which sells conventional lattes, but also cheesecake.

So, what are you and Mash up to at the moment? What’s the current plan for the new PZ mapping?

Mash and I are currently beavering (raccooning?) away expanding the map cells and trying hard not to terrify ourselves by looking at the ludicrously enormous world canvas we’ve set up to contain the foreseeable future of map updates. Map production is a lot faster now than it was, thanks to some tremendously useful new tools at our disposal. It’s still a lot of work though, since it’s important that the maps not only look interesting – but play well. So there’s a lot of editing and moving things around going on. On top of that, even when we reach a point that a cell is ‘done’, it’ll still be refined as we add new tiles.

I heard a wicked whisper that the current map is being abandoned. Is this true? Will we be saying goodbye to the map we’re all used to? Saying goodbye FOREVER?

Less a ‘goodbye’, and more an ‘adieu’. It won’t be permanently deleted. and will be available to play as an alternative world should you bizarrely wish to play a game in a setting where there’s a hodgepodge of buildings – some of which have no bedrooms or toilets because we forgot to put them in. But that old map is not Muldraugh, it was just a way for us to test out tiles and gameplay. The new map cells are Muldraugh. For the first time, we’ll be playing the game in an actual game world.

Can you explain how Chris is integrating the new map start menu? How will user-created maps fit into that?

Oh, it’s all tremendously simple. You just choose the world you wish to play in from the list of available worlds. Installed user-created maps simply appear in that list.

What’s this WorldEd business? Where have they come from, what do they do and how have they changed your life?

WorldEd is basically a standalone tool that is an extension to TileZed and has been made by the awesome EasyPickins. That tool in particular will have a larger impact as we continue to grow the map, and is basically a way of manipulating the maps on a world-scale as opposed to an individual cell scale. Now that we have map streaming this is particularly important, since you don’t want to have obvious boundaries visible where one map cell meets another. Before streaming this was never an issue because there’d be a load point, so if a tree line or road didn’t exactly line up it’d be really difficult to notice.

How about BuildingEd then, is that the same sort of deal?

BuildingEd is very much in its infancy, but it’s already useful for sketching out building layouts in a way that allows you to muck about with the design before incorporating it into the map. In the past the process of moving a house wall to make a room large enough for a bed, for example, was rather tedious. When there’s time to develop this tool further it’s going to become an absolute life-saver for both us and modders.

What’s the plan in terms of releasing WorldEd and BuildingEd to the modding community?

As with all of our tools, once they’re in a state that they’re fit for general use, we will release them. The sooner the better for everyone, really.

Shouldn’t we think of slightly more imaginative names for these tools?

It’s an Editor for Worlds, you see? When you think about it, it’s an incredibly clever naming convention.

How big do you want the PZ map to become? What other locations will eventually be covered?

As big as is possible. We want to expand beyond Muldraugh – one of the reasons I personally am so keen on the game location is the stuff that’s around Muldraugh. But first things first.

What sort of new areas will PZ players soon be exploring? What’s been built recently?

Well I ought to really point out that these new map cells are designed to be a little more realistic in terms of buildings and placement than the mess of the demo map. So you’re not going to be walking down the street in little old Muldraugh and stumble upon a helicopter landing pad or anything. But there are the sorts of things you would expect to find in a town like Muldraugh. There’s a couple of motels, a trailer park, and a bunch more shops amongst other things. Hmmm… that’s not the most exciting way to end an interview I’ve ever seen. I’ll do a little dance too. There.

Okay then gang, that’s your Monday update. Seeing as there’s so much going on at the moment, however, it’s always well worth following @theindiestone on twitter for rolling updates. There’s plenty on the brew at the moment, so much we even forgot to mention the new (working title) Survival mode that Lemmy details in this forum post, and there’ll probably be more fun stuff popping up in the week. Thanks everyone!

The Coding of the Living Dead