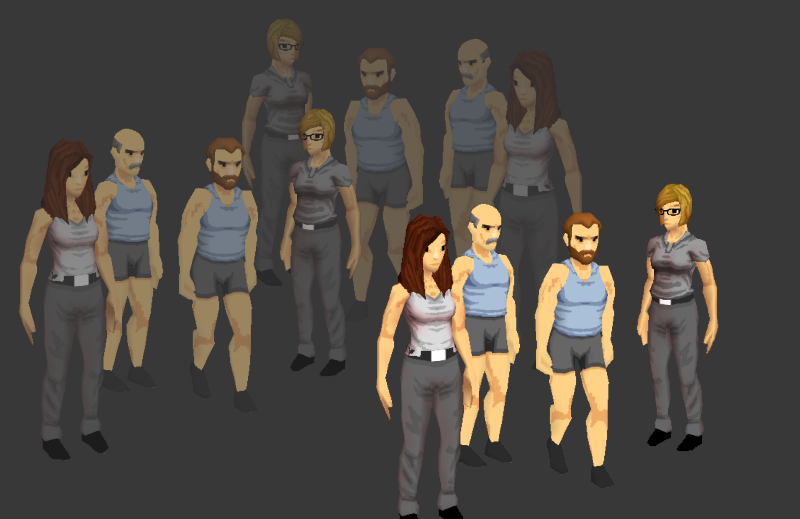 Evening all. Here’s your Monday slice of blog love, but first a spot of housekeeping. The Indie Stone forums are in the process of switching hosts, so some users might experience unpleasant down-time over the next day or so. Don’t worry though, we still love you and are assured that all gremlins will be removed through the inevitable forward march of time.

That’s the boring stuff out of the way. There’s heaps of stuff to talk about this week – and there’ll likely be a few extra videos we were hoping to share today appearing soon too. For the past few days Lemmy and Binky have been fiddling with the way our sprite models are (in their words) ‘enshrunkulated’ – to make sure they’re as crisp as we can muster when RC3 is finally unleashed. Unfortunately they take forever to export and get in the game, meaning we haven’t been able to grab one of the planned videos today.

What we do have however (fanfare) is the first video appearance of Romain’s farming system – which is now a fully operational part of the Zomboid mainframe. Some aspects of it are still WIP, and some text will change, but it looks a little something like this:

Romain explains: “In this video, you see only a few aspects of farming. We’re starting with seven plants, three diseases and all my statistics and calculations are based on the climate of real world Muldraugh, Kentucky. Every plant has a health stat that determines your vegetable and seed harvest – if it’s sunny it’ll grow, but cold weather and over-watering will see it drop. The healthier your plants – the more your farming XP will rise, and then the more bounteous your future plants will be”

Other risks to your crop will be extreme temperatures, sowing seeds at the wrong time of year, idiot zombies trampling your fields or (of course) callous NPCs stealing your freshly grown produce. “I forgot to show off the fertilizer in the video” adds Romain. “And it’s worth bearing in mind that in future we will be introducing gameplay like making compost, foraging wild berries and mushrooms and allowing friendly NPCs to look after your crops in your absence. I’ve also pretty much got tents and campfires integrated with the main game too.”

Possibly the biggest notch we’ve carved into the RC3 bedpost this week, meanwhile, is the integration of nearby NPC behaviour with the statistical metagame that tracks them as they explore the wider map. Alongside map streaming (that made it necessary in the first place) this was one of the biggest jobs that needed doing for the update – and finally lets us tie a lot of the fun stuff we’ve been concocting together. Lemmy describes the system in detail on the forums but we should have a video to show it all off in the not-to-distant future.

Mash and Binky, meanwhile, have continued beavering away on the new maps – with Binks also investing time into mixing things up in terms of zombie and NPC appearances. There’s beards in there, spectacles and different haircuts – meaning that we’ve got more than 300,000 frames of animation floating around now. That decision to stop hand-drawing sprites seems to have been a good one!

There’s other stuff to share, but it’ll all be best explained with accompanying videos. So we’ll be chiming in as and when they happen. Until then, fair Zomboidateers!