Tales From the Metaverse 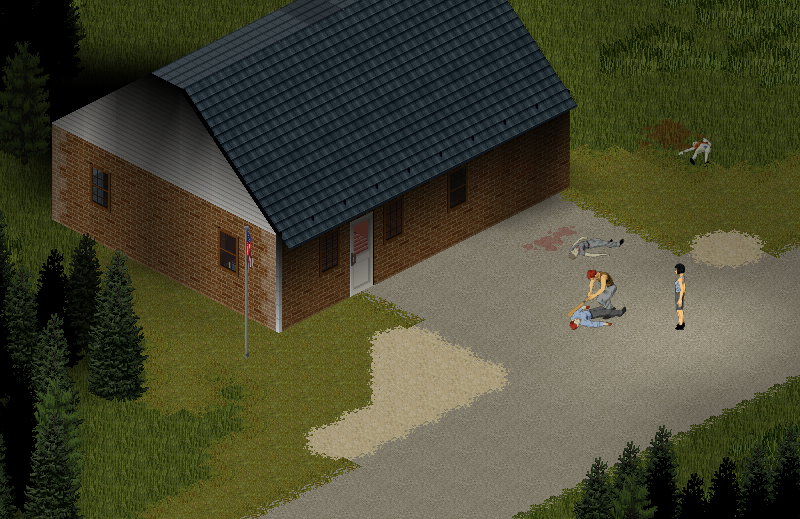 For the second Monday blog penned while Will tends to his budding QPR supporter offspring — and tries to remember what REM sleep feels like — we will talk a little more about the meta-game. What it is, what it will do and why it excites the pants off us.

For the uninitiated, the meta-game is a high-level simulation of the game world that allows for much more in-depth character interactions in the game, linked together by story events scripted for certain circumstances, and allowing us to have these in-depth character interactions across the entire game world, way beyond the loaded area of the map around the player, without the game slowing to a crawl.

Some of this may overlap earlier blog posts, and some of the conversations in our podcast on RingoD’s channel, but what the hell.

While we’re still not quite at the stage we can show the in-game workings, we have some shots of the meta-game in action and explain in detail what the ramifications will be in the game. We’re tantalizingly close to being able to grab some awesome uninterrupted footage of it working in-game, and in the run up to release we hope to do several videos showing it off.

To start, we’ll do a little make believe story involving some random characters. These are NPC characters within a game of Project Zomboid, and everything you read is taken directly from the functionality of the current meta-game system as it stands now.

Jack is a police officer. He’s been thrust into the role of leader to a bunch of survivors in Muldraugh. With him is his wife, Lisa. Others include two brothers, Bobby and Darren, and Shawn, Jack’s best friend, also a police officer.

Our characters are situated in a farmhouse north-west of Muldraugh, and exist purely in the meta-game, along with numerous other survivor groups all around Muldraugh.

The first day is rather uneventful. Darren and Bobby exchange a few insults, Shawn gets to know Lisa better (not like that) while Jack spends the day patrolling around the farmhouse to keep an eye out for zombies or other survivors.

Jack decides to call a meeting. The group gather in the living room. Low on food supplies, he plans a looting mission, telling Shawn and Bobby to come with him.

Jack, Shawn and Bobby leave and make their way south-east into Muldraugh. Jack decides they should head to Spiffos as they are low on food and a fast-food chain seems like a valuable target.

They make their way to the restaurant, picking off zombies as  they go.

Spotting movement inside, Jack forms a plan. “I’m thinking that me and Shawn can make a frontal assault. Bobby – flank ’em. Windows and back doors.” – Bobby begrudgingly heads around the corner to the back door.

After a moment, Jack and Shawn quietly push open the door and step inside. At the far side of the restaurant they hear glass smashing, and Bobby shout “Who the fuck chose this place to loot?” and notice a sea of the undead swarming in front of them. Bobby is surrounded.

Back to the farmhouse, Darren is sitting guard at the window when Jack and Shawn burst frantically through the door.

That night, while Jack continues his tireless patrols of the farmhouse, Shawn spends more time with Lisa, becoming closer to her. He starts to get jealous, growing resentful of Jack being Lisa’s husband, and being leader of their group. He has a quiet word with Darren, who now blames Jack for his brother’s death. Together they decide to dispose of him.

Day 4 – Everyone is hungry. Jack plans another trip into town. Darren and Lisa will stay back and help protect the farm in their absence. Shawn goes with Jack.

Arriving at a small grocery store, Jack thinks on what to do, and turns around to find Shawn pointing a shotgun in his face. Shawn pulls the trigger, and heads back – head full of lies to tell Jack’s widow.

It should be noted that in some circumstances we don’t currently have all the dialogue to represent some of the meta events. stuff like the conspiring may be more ‘gameified’ in the initial release, though this depends how much time we have and if there is scope for additional dialogue to be written once Will returneth. Where looting missions, characters reactions to zombies, and others already have a ton of variation depending on the traits of the characters.

Either way, the goal is to expand all conversation related character interactions with actual dialogue in future updates, having characters insulting, bonding and confronting each other based on their traits and the situation..

What you read above is directly possible with the new meta-game system. Completely emergent story-telling using events and relationship modifiers.

The player will also have the option of interacting with other NPCs in the same way as they can with each other, right clicking them to insult, befriend, order or plot with anyone they choose. Initially this may merely result in a gamey ‘you insulted Joe, he sadface :(‘ and opinion modifier until we get a whole array of insulting comments for your character to spout. But that aside, the story above could have involved the player as any of the roles.

So how would the story above evolve naturally in the gameplay?

Each character has various personality traits, and a calculated opinion of every other character. Weak and Aggressive people don’t get on. Trusting people like everyone more than they should. Brothers, sisters, husbands and wives get a substantial bonus to relationship between each-other.

Envious people, like Shawn, covet leadership, as well as dislike people more if they envy their friends, lovers or possessions. Insubordinate people have a severe opinion penalty for a leader, no matter who it is.

This leads to some characters having an inherent like or dislike for other characters, which can be altered over time with events. Characters deemed responsible for a beloved or friend’s death will have a severe penalty, where a character who saves another’s life could become a lifelong friend.

A character with exceptionally low opinions of another may start conspiring to either take leadership away from them, or quietly get them killed. Devious characters are more likely to involve themselves in such plans. In the future this could expand to many other things, spreading rumours and poisoning relationships, getting them thrown out the group for misdeeds they are or are not guilty of.

As characters get more touched by the desperate world around them, they may become unstable, depressed, and a variety of other maladies that will further drive a wedge between your group. No longer will the emotional traits and moodles (which will themselves be getting a UI and conceptual makeover post RC3, before Steam) impact on the game be mild, the emotional states of characters could cause massive rifts that tear apart a group, or end in piles of bodies and bitter rivalries.

This system is being built upon, adding events that occur when one survivor group meets another, or zombies attack a safehouse, and numerous others. And each one added provides more power to make future events quicker and easier to add, which will enable a massive swell in game content over future releases.

With the necessary transplantation of the Kate and Baldspot story into the new map, we’ve also redesigned it to fit within the meta-game. If Bob is told to go to the shed, as a player this will appear as a quest. As an NPC, Bob would just run to the shed. Does he leave the cooker on? If it’s a player, it’s up to them. If he’s an NPC, it’s probably 50/50.

Playing Survival mode after completing the K&B story will mean, like any completed story (mod or official) it will be transplanted into the world’s meta-game. These characters are now real citizens of Muldraugh. If you travel to the tutorial house, will you find it in flames? Will you find a zombified Bob and Kate trying to munch on your face? A dead Bobby Collins, killed by a hammer to the head and a distraught widowed Bob to team up with?

As we expand the K&B story, and add other stories into the mix, eventually Survival mode (Sandbox will be able to disable these, do not fear) will be more and more populated with real recognizable Muldraugh citizens whose stories start in one place, but can branch off into the meta-game at any point.

The plan is, ultimately and beyond this update, to allow the meta events that occur to a group to be logged by the individuals experience them as a first person recounting of the events, to allow the player to query characters on their histories before they met, or to get feedback on the events of a looting mission.

Not only this, but further to allow for events to be fabricated in place of others, so ‘I blew his brains out with a shotgun’ would mysteriously transform into ‘I was cornered and he saved my life, but got overrun in the process. He’s a hero’.

This would open a fundamentally different play-style to the game, where the player may opt to send other survivors out to do their bidding, and focus more on the management of the group and security of the safehouse, rather than looting and fighting zombies themselves, trying to keep everyone happy and sane, commanding your group to gather resources to build, to recruit new NPCs with skills you need, and to look for warning signs of conspiracies and lies.

As more and more events are added to the game, linked to dialogue scenes and tied into character traits existing and new, particularly when the modders get a hand on it, will allow for such rich, involved, emergent and persistent stories to form from the web of character relationships, events, grudges. That NPC you team up with will no longer just be a blank face with a name, but a character with a history as long as the time you have played in the world.

Maybe he brutally killed a group of six helpless survivors, one escaping and vowing vengeance. What will happen if they meet up again?

It’s perhaps cliche to say the possibilities are endless, but with this system in place, the potential for extra content to be quickly injected into the game is very exciting. Each additional event, or chain of events, triggered in the right circumstances, will exponentially multiply the variety of story events a player can have in Survival or Sandbox modes.

Our ultimate goal is for people to be able to watch a Lets Play of a Sandbox game and assume it to be part of a story mode. It’ll take a good while to get there, but with this system in-place, the work required to add quite involved character events into the game has shrunk dramatically, and require little coding time at all.

Hopefully to the point that, especially with mods, there will be so many variations of events that could occur that no two games will be even remotely alike, and truly reach the emergent story-telling we feel the game requires to be fully realized.

Wishing you a Zombie Christmas

State of the PZ Nation (and Carpentry!)