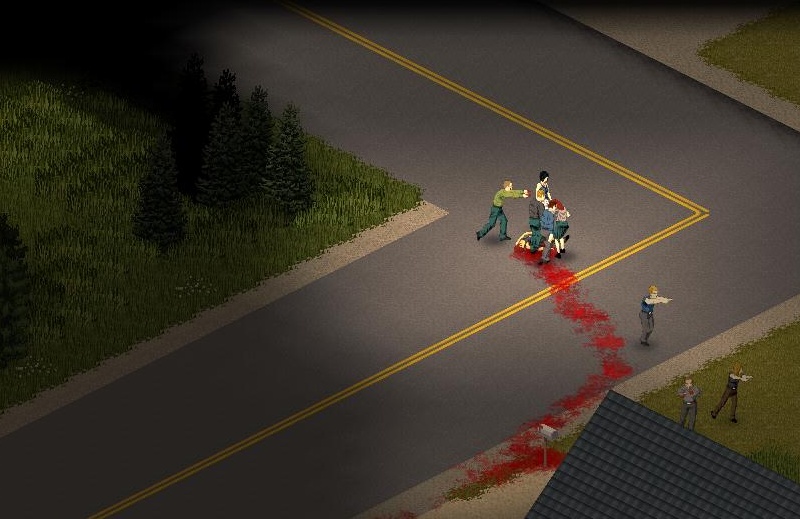 Another week of testing in the can. As anyone who’s followed all the video action this week will know, it feels really close to that inevitable point where we say ‘oh what the hell’ and release. But not today, I’m afraid.

Before we start a link dump of the many hours of RC3 footage, we will discuss all of the current issues in the build, only one of which completely forbid a release. Little of this Mondoid will likely be news for forum regulars, I’m afraid, but this is for everyone else. Hopefully the streams and videos are doing more than a Mondoid ever could, anyway.

Save bug – For some unknown reason, the testers saves are getting corrupted very regularly. They will go to reload a world and their world data will be garbage. This will likely be something massively trivial, one byte of data getting saved but not read, or read but not saved, somewhere buried deep within the Zomboid code. This is the one show-stopper that means we refuse to release, since the danger of people losing hours of game-play (remember that loading and saving happens all the time as you walk around the streamed world) or worse a zombie fortress they have spent 30 lives building.

While many people may say this doesn’t matter and they would still like a build, for every one of them there is a new customer who gets angry that our game destroyed their save. This is the one and only bug that means we’d completely refuse to release anything.The status of this is ‘ongoing’. It seems to be very common within our testers but whenever testing with a debugger attached, where we may be able to figure out what exactly is to blame (as I say, probably something really simple) it always seems to work perfectly, as if to taunt us. As soon as it’s reproduced, it may take minutes to solve. There is simply no way to remotely estimate it (but no, we’re not talking SIX MONTHS or anything, don’t worry!)

The second biggest issue (well, undoubtedly the biggest issue for those affected, but one where a release may actually aid us in solving) is problems running the game on some (not all) low end integrated Intel graphics. This is serious because obviously people with these cards have paid money to buy the game, and we can’t leave them out to dry. As much as it may be frustrating to those, it would be handy to get more data on this problem, so we would consider a forum release before this is fixed to help us trap it. We have made some limited progress, getting testers to the main menu and in some cases into a slightly graphically glitched game, but this one is also ongoing. It should be made clear though that this is a bug, not a performance bar raising issue. We’re doing nothing that shouldn’t be possible on these cards, so there’s no reason to worry about the long-term compatibility of your game if you are affected.

A third issue, which in all likelihood is related to the save bug above, is the ‘Langolier effect’, as its become known. Anyone who’s seen streams may have spied this a few times, where either the entire world becomes disjointed like an earthquake fault line, or more often you have areas of psychedelic void. It’s possible this is an independent issue but our suspicions are it will be solved the moment we fix issue #1.

More a cosmetic thing, but still seriously damaging to the atmosphere (even if many find it entertaining) is the moonwalking zombies. Seems that when zombies are reused (a memory / garbage collection saving tactic) after being killed off, they cease to be able turn to face the direction they are moving, leading to humorous but massively wrong looking results.

Only the first (and, out of vanity, possibly the last) bugs are stopping us from considering a release, but obviously we could not consider a Desura release until the second is fixed too. Desura members with intel cards may not be too happy to find Desura auto-updating them to oblivion. We should point out if we do do a forum release prior to Desura, damned if we’re falling into the same trap as before. We’ll get the intel stuff sorted, and get on Desura as soon as possible. It’s not fair how long those lovely people have had to wait for an auto-updatable version.

So that’s the situation. We’re so close we can smell it, but there’s that one last hill to climb. We’re overjoyed at how the videos and streams have been recieved, and moreso were even surprised ourselves how much it’s come together since testing began. It also only goes to show we made the right move holding it in testing as we did, as comparing the 24th build with the 1st would be quite eye opening (maybe we can do that for fun post release?)

So when? We know some rumours were circulating that it could have been today. Well sadly there’s no way we could comply with that, as much as we’d loved to have. Next week’s Mondoid? It’s possible. NOTE: It’s possible, not yes. It could be the week after. But yep, we’re really down to talking about these kinds of time-frames now. This is super exciting for us, and the last couple of weeks have been wonderful after a very long year. To see people’s reactions to the new builds has reminded us why we’re doing this and what all the work is for. It’s a happy time.

So now the update is out the way, let’s get onto the video link dump! We would recommend giving all these lovely peoples a subscribe, a follow, or whatever the equivalent is for twitch as they are all wonderfully nice and entertaining to watch. A word of warning though: There is a LOT of footage here, so firstly you’re guaranteed to see a lot of moonwalking zombies, or pieces of the universe mysteriously vanishing. You’ll also see a lot of Zomboid RC3 content laid bare. You may want to save it all as a surprise, or you may want to watch every minute of it. It’s your call.

There are probably other streamers or Youtubers we’ve forgotten, not because they weren’t wonderful but because, erm, there’s been a fair few of them. Apologies if so: let us know and we’ll add them to the list.

Oh, and if videos are a bit too revealing for your tastes, there’s also a nice cache of screenshots over at Watch Survival.

News & Dev | 01 May 2013
Project Zomboid | Copyright © The Indie Stone 2023. All Rights Reserved.
Site by Redwire
Stable Build: 41.78.16 | IWBUMS Beta: 41.78.16 | Version history | Wiki
Follow us
Manage Cookie Consent
To provide the best experience, we use technologies like cookies to store and/or access device information. Consenting to these technologies will allow us to process data such as browsing behaviour or unique IDs on this site. Not consenting or withdrawing consent, may adversely affect certain features and functions.
Manage options Manage services Manage vendors Read more about these purposes
View preferences
{title} {title} {title}