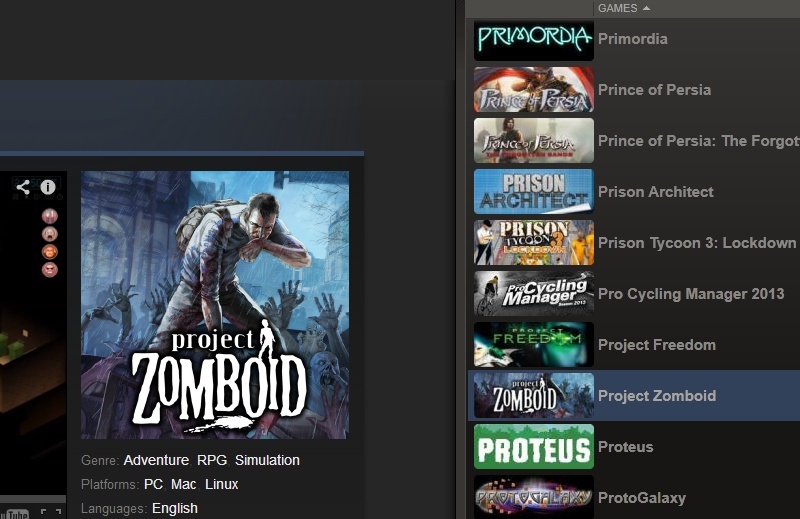 So we’ve finally gone and done it. The first big step toward Early Access is getting our game running within Steam, and to begin the process of giving out keys to our existing customers. The time has come! To make it clear, we are NOT currently available on Steam Early Access, however Desura customers of Project Zomboid are able to redeem Steam Keys.

First some information on how to get a Steam key, if you’re so inclined:

1) The version that’s on Steam is effectively build 17, since the only build possible to use was one with Steam integration we couldn’t upload the last Desura build, or forum test 16. However, there may well be some bugs still in this build that need sorting out. So please don’t consider this an official release. This is about getting people on Steam who want to be, primarily, so we’re not cramming it all in last-minute and risking any delays. That said, a few issues aside, will give you a chance to play with the new stuff in the build!

2) There is currently no ‘install script’ for auto installing java and whatnot on the three platforms. This will come within the next day or two. If you can already run the game, then you should be golden. 64bit OS users who used to run the game in 64bit may need to get Java 32bit (x86) JVM installed if they do not. This will obviously be automated soon

3) At this time the only way to obtain a key is through Project Zomboid on a Desura account. The ever awesome Desura have offered to help us distribute keys to everyone, even those who did not purchase the game on Desura. To do this ourselves would likely have absorbed a whole chunk of our time that could be spent working on getting the game ready, so this is wonderful of them.

We would very much appreciate anyone who hasn’t bought the game through Desura to look through the games when they convert, and consider sticking around the community, because there are many gems in there including many ungreenlit games that deserve more attention. And as evidenced for doing this, Desura themselves deserve endless support!

To convert to Desura, input your Project Zomboid username and password (game log-in details emailed to you when you bought from Google Checkout, NOT your forum user/pass) into this form:

Click on the ‘Keys’ link, and you’ll find the Steam redeemable code listed there. “Activate a Product on Steam…” in the Steam game menu. Alternatively, go here:

Those who keep tabs on the forums may know that Zoom is set to return to Project Zomboid. However, this time we’ve implemented a few extra things, all optional. You could have the game at x2 zoom at all times, or you could have the game auto zoom when indoors and zoom out when outdoors. You will also be able to specify scroll speeds and whatnot. Here is a little demo.

So why this? Well zoom support reintegration has been a much much requested feature. Also we still have had concerns about the difficulty navigating buildings, and in the run up to Steam want to try and get as much of this sorted as possible as it contributes to the frustrations new players have in particular.

You may also notice in the video that we have fixed various issues with the light system during some optimization stuff, and in the process now rooms with no windows are dark, and daylight can now light rooms through doors and windows.

Upon downloading the Steam version you may notice the mouse controls not behaving as you’d expect. For a long time, a big criticism of the game has been the unintuitive combat controls, and we’re attempting to fix that. Anyone unhappy with the change can be assured that a ‘classic controls’ option will be available, but we and the majority of those who have tested it seem to agree think the new controls are much more intuative and will be easier for new players to pick up, while it has no effect on the actual combat mechanics depth.

We’re deliberately not mentioning how it works, because we’re hoping it won’t require it and will be easily guessable with a play with the mouse, and part of seeing if a system is intuitive is not telling everyone how to do it in advance!

Fire makes a return! It’s still undergoing some balance to up the virility, but as of the new test builds, Molotovs and cooking disasters return to Project Zomboid!

Everything else is coming along too, Westpoint is starting to fill out with buildings, and some cool animations are in the pipe for Kate and Baldspot. We’re very excited about what’s coming up for Project Zomboid. Yay!!