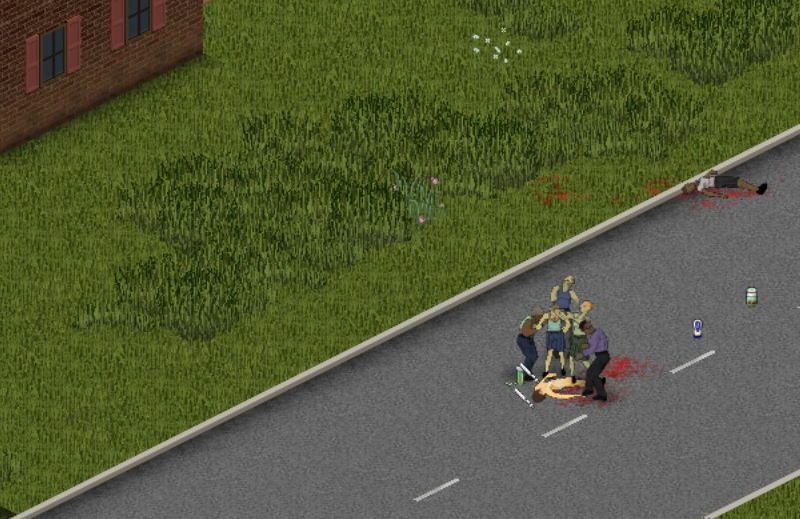 Hey everyone, Happy Mondoid! Here’s the run-down on what we’re up to here at The Indie Stone.

A fair portion of the original Muldraugh map was built in the wee early days before Easy Pickins’ amazing building editor was available for use by the development team. We’re currently in the process of rebuilding these, even though the renovations  might not be immediately obvious to the player. Right now we’ve worked on all the relevant ‘non-house’ strutures, and are now moving onto residential areas.

So, why bother? Well, rebuilding these potential safehouses will make them more stable – you should hopefully be able to kiss goodbye to bugs like falling through the floors of the factory. On top of that loot will be better defined, and lighting errors that stem from having things on the wrong layers should be eliminated.

The next bit of map building will concentrate on filling out areas and completing half-done areas all over the map.  (As of now, you might ‘choo-choo-choose’ to revisit certain areas…)

This is a continuing process, and in the beta branch and the upcoming build we’re already seeing much better results in some that previously found the game unplayable.

We’ll continue to improve this as we go forward and will remain a priority until the game can run on any PC that should be able to handle it. Another version of the beta is due out within the next few days (depending on how testing works out) and if that goes well we’ll look to doing a full release. Then we can start thinking of restarting work on exciting stuff like NPCs that we know most people are clamouring for.

In the existing and upcoming Steam beta patches we’ve been going to great pains to improve item balance in Zomboid. On one hand we don’t want you to get too much loot, but on the other we don’t want to make every survival bout a treasure hunt for… say… a trowel. Or for tent pegs. Or a hammer. The lack of these items certainly seems to’ve made it difficult for people to start farming, camping or building when starting a game in West Point.

As such we’re introducing lots of new ‘specific room/area’ spawning. So, for example you’ll likely find those items in the West Point tools store (in front of Sea Horse coffee). There’ll also, meanwhile, be an added likelihood to find them in kitchens, sheds and the like. Useful tools should be where you expect to find them!

While we’re talking balance, meanwhile, we’ll also be nerfing the rain collector. We’ve noticed in playthroughs that players haven’t been stocking water prior to the shut-off, and have been able to survive with two or three crafted rain collectors. That’s too easy, don’t you think? You’ll now be able to build a rain collector at Carpentry level two BUT it’ll be small – and need extra materials, like trash bags. The one you’re used to crafting now will only be available at Carpentry level 4.

In the released beta patch and the upcoming one we’ve stomped on a lot of bugs and glitches – some of which will have been making your survival more painful than it needed to be. For example, the alarms that could sound in your safehouse after loading up saved games. That one’s been killed. Likewise farming bugs, disappearing textures and problems with harvesting.

In terms of crafting bugs we’ve also now defeated the ‘getting naked to create bandages’ bug, and the weirdness that meant that rotten food could be used in recipes to make fresh food. (Cooking now takes into account the age of the recipe items used, and the resultant product is their average age). All this will be in the next beta build.

Next up on the priority fix list is the crafted stairs bugs – we want to stop limiting your wooden skyscraper creation!

It isn’t an immediate priority, but in Romain’s down-time he’s also been working on gamepad support. As people will be aware, plugging in a pad results in rudimentary (and highly experimental) local co-op play – and Romain will be slowly building on this whenever he doesn’t have bugs to fix. This week gamepad-use on the menu screen has been worked on, and next up he’ll adapt the in-game menu to it too.

Once we’ve got the game fully playable with a controller, Romain will be finishing off local co-op – with multiple moodle displays, skills panels, save game capabilities, character creation etc. This is all a way off though, and we don’t have any particular timescale for it.

Eagle-eyed survivors will have noticed new items popping up in the game that currently have no obvious use- glue, duct tape and whatnot. Well, they might have something to do with the weapon-repair system that’s under discussion between Mash, Binky and Romain/RJ. Likewise other items will go towards making our current recipes more realistic – thread will be needed to make a tent kit for example. So, watch this space on that one!

Would anyone be interested in a PZ meet-up in Newcastle on a weekend in January? It’d be lovely to meet some of you lot. We’re also considering having a PZ group hug at Rezzed (Birmingham, UK) in March if you’re interested. Just putting it out there1

That’s about it – tune in to the Steam beta to try out the new builds as and when they appear. Enjoy your desperate, and doomed, attempts to survive against insurmountable odds!