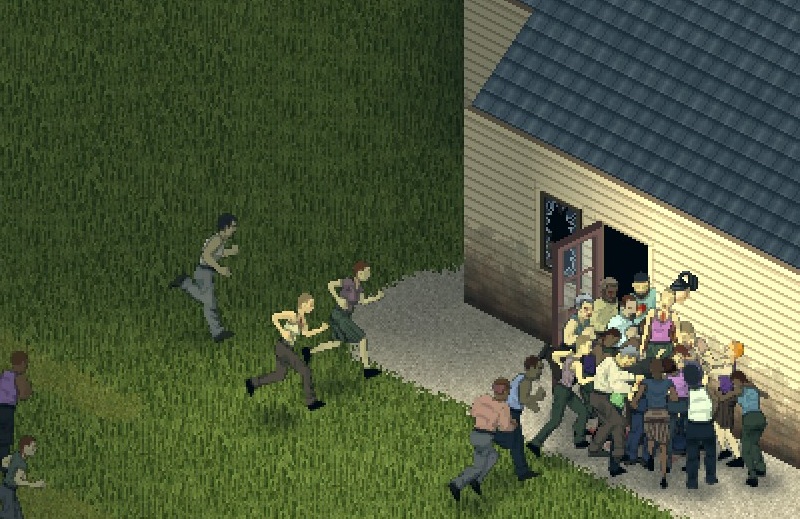 This week’s Mondoid is brought to you by the game NEO Scavenger. This is an unsolicited promotion on behalf of the Indie Stone team, who wish to flag it up because it’s built of 100% PURE AWESOME. Anyone and everyone who likes Zomboid will love NEO Scavenger. It’s a more turn-based but deeper survival experience with a lot of crossover in appeal, so we see no reason why it should not appeal to a huge chunk of our fans.

So, what have we been doing this week other than using our own channels to promote NEO Scavenger? Well…

Since it’s been a long time since we’ve had a stable release go out to Steam proper and Desura, we’re going to call time on the current Steam beta very soon, and will be soon be releasing it to the wider world. We won’t say today, because we made that mistake two weeks ago despite all our training, but we INTEND for it to be soon. (NEO Scavenger!).

We’ve gone full circle and come back to using a pre-game launcher, thanks to inspiration from the awesome Starbound (which is also a good game, much like NEO Scavenger). This affords us several advantages.

1) We can show a webpage that displays info for all users without a time limit, and which can be updated on the fly between versions if need be. We can have it contain links to useful information or news, perhaps changelists and all that gubbins.

2) We can provide more options. If your settings get somehow fubared (we still have a few instances of this) then you’ll no longer have to get into the game to set them. We also intend to add the mod loader outside of the game (as with Skyrim) to allow for better mod management, languages, as well as resolutions, and an option to completely zap all the option data in case any weird problems arise.

4) If we want to abuse our position and recommend a game like NEO Scavenger, then we probably can.

With the first beta of SteamOS released, it’s an extra reason for us to make sure the joypad support is working throughout the game, this will be a priority (outside of course the other 5-10 priorities we have) as it would be great for Zomboid to join forces with Steam Box in its invasion of the living room, and we fully intend to support the platform naively. (Maybe fellow Linux compatible NEO Scavenger will do this too? Who can say.)

Andy has been a busy bee converting the 3D character exporter from the evolutionary dead end that is XNA (we curse thee Microsoft!) into the frustrating but open world of OpenGL, to allow for it to work on more than a subset of Windows systems. This is integral to allowing characters, costumes and animations to be fully moddable once the mod tools finally surface. If you’re wanting to mod new weapons, character skins, animations, clothing, animals, or heaven forbid cross the children line we refuse to cross, then this will be vital, and we don’t want such power to be solely in the hands of the Windows folks.

He’s a had a much frustrating time, as anyone who follows his twitter feed will attest to, but has made some great progress, and we’re very excited at the possibilities once the tool is finally done. As well as this, he’s been working on expanding and polishing the wilderness cells between Muldraugh and West Point, in preparation for more buildings and whatnot from Mash. Andy has also been playing a little bit of NEO Scavenger, and approved of what he saw.

Work is still continuing on trying to fix the GODFORSAKEN Steam Overlay bug. Thankfully we can now at least warn of the cause of it on our new launcher, should it drag on any longer, but this is a nasty that’s setting itself up to be this season’s Big Bad. (Previous fan favourites have been the ATI Bug and Invisible Walls). Once we’ve resolved it we’ll have very few serious bugs left. We hope NEO Scavenger doesn’t have to deal with Steam Overlay issues, as they are very frustrating to us and users alike.

In between bug fixing, Romain has carried on the Indie Stone tradition of ‘taking a break’ bymaking more fun and indulgent additions to the game instead of perhaps going for a walk or doing something sensible. As such, he has made an awesome addition to the weather system, which will lead to some dramatic and exciting moments in future. (Despite being turn-based, NEO Scavenger is also dramatic and exciting btw)

Since Lemmy was dumb enough not to put the video on unlisted, this may not be a surprise to everyone, but what the hell!

Quick! Watch it before Youtube decides to protect our rights from the evil money hungry YouTubers and blocks it or something. (That’s some cutting edge Mondoid satire there, folks.) We sincerely hope that YouTubers posting NEO Scavenger videos are never hit by any problems with Content ID Matchs, as we’re sure the creator of NEO Scavenger would not appreciate it.

Okay, we’ll give you a hint, since a few have been a bit sad at the short functional blogs, but again we need to reiterate THIS DOESN’T MEAN IT’S INCOMING.

Our plan to develop the meta-game a lot more solidly, quickly, and easily, is that we are quite literally developing the META game. A game outside the game, using java and the PZ engine for easy portability. We’re using very simple network code and developing a test-bed that’ll allow us to play the meta-game system as a turn-based board game of sorts – using all the same meta-game events that the game would use. We’ll be simulating noise generated, for example, with ‘tokens’ and keeping everything rooted in the physical world – despite being wholly virtual.

The idea behind this is that we’ll be able to balance and polish the meta-game system to produce a solid and elegant systems that were otherwise going to get complex and muddy. We’re positive that it will result in a much, much, much better system

The meta -> real -> meta code is already functional, so once this is complete, as we tie the meta-events (represented as cards) to the actual scenes that play out in the game. This means we can make massive progress and involve the entire team (and maybe one day the community?) intimately with the design and evolution of meta events, and chaining them together into emergent narratives. It goes without saying such a system may lead to other interesting ways to play the game in future!

A side effect of this, and just one of the great design philosophies to come from this way of thinking, is a planned re-partitioning of the map that will divide smaller areas of the map into ‘regions’.

It will think of areas like ‘that row of houses’, ‘that street’ or ‘the school and the surrounding grass’. There will be logical map partitions that will have adjacency, and can be tested for security via construction or barricades. Not only will this solve our issues for zombie migration, giving us logical area transitions for Zombies to move between, but NPCs and players alike will be able to secure both buildings and (potentially) entire streets – having them Zombie spawn proof as well as understood as a single secure location. In short: a ‘Woodbury’ situation will be something that happens naturally with any survivors able to hold and clear and fortify sufficient areas.

Exciting non? Almost as exciting as NEO Scavenger, we think.

Other important work this week has involved going onto Steam and purchasing NEO Scavenger, and playing NEO Scavenger. Not only is it inspiring and vital research material for creators of a hard-core survival game, but NEO Scavenger….

Have a Easy Zomboid Xmas and a Pickins New Year