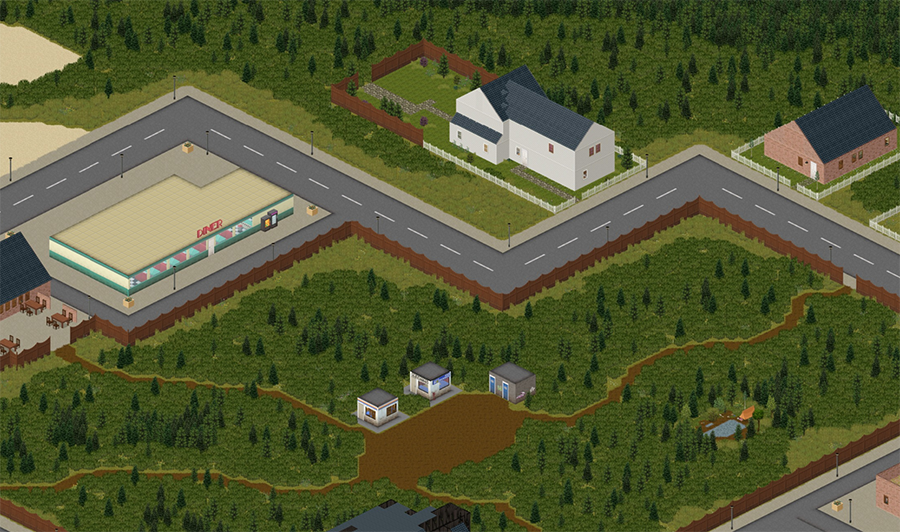 Happy Mondoid Zomboiders. This week we’re still badgering away trying to get a version of build 25 that we can finally get out to the wider public. A new version is going into closed testing tonight, and we’re hoping to get another I Will Backup My Save (IWBUMS) version out soon after assuming nothing explodes. It seems Easy may have sussed out the troublesome crashes a ton of people were getting. (Damn stencil buffers!)

To while away the time until that happens, we thought we’d throw a few questions at NPC scripter, map modding Geordie extraordinare RingoD123, aka Paul Ring, who can be seen here posing with some fella we met at Rezzed (<3<3<3) in a picture we stole off of his Facebook page!

So, for the uninitiated, what is Bedford Falls?

Bedford Falls is the first community map mod for the latest version of PZ. Its a rather large town/city that also incorporates the “original” map from much earlier versions of PZ that people have been clamouring to see back in the game.

Oh, and also for the unititiated – who are you Paul ‘RingoD’ Ring?

Well, my name is Paul (RingoD over the interwebs) and I first got involved with PZ back in the first alpha tech demo. It was the first game which inspired me to start a YouTube channel, and also the first game I ever made mods for. After speaking to and meeting the team a few times I was lucky enough to be asked to join the team to help with NPC’s and Stories, taking the awesome dialogue created by the spiffing Will Porter and scripting it up to be usable in game, as well as the many scenarios/events you can expect to come across in the future.

Why’ve you called it Bedford Falls? Is it because Will is from Bedford, and that’s a cool market town just north of London with a badass Nandos?

Unfortunately Bedford Falls isn’t named after a cool little market town with a badass Nandos! My favourite TV program of all time is Red Dwarf, and in one of the Red Dwarf books (Better Than Life), the boys from the dwarf end up stuck in a computer game (without knowing) where the world is built using the players own subconscious. As it happens, Listers’ (one of the Dwarfers)  favourite film is, Its A Wonderful Life, so the game re-creates the town from the film, which is called Bedford Falls, and was the first name to pop into my head!

How has it been constructed? Who’s been involved?

The map was constructed using the Mapping Tools available on the forums ( http://theindiestone.com/forums/index.php/topic/4674-map-tools/ ). I based the road system on my previous map mod that was made for an earlier version of PZ. Then, with the help of awesome forum members, BobHeckling and Japer, we went about converting all of the buildings from the old map mod to work on the new version, which included adding proper room names to every room so that the correct loot could spawn and NPC’s could recognise what kind of room they are in once they are back in game. By the time this was done there had been somewhat of an explosion of new buildings on the forums from various forum members (956Texas, BeastlyBeans, BobHeckling, DoctahWong, DoubleBrain, Grivcin, Japer, Jinja, LeoIvanov, Liva98989, Maklane, Mendonca, NeutralNZ, Phex, Pridelost, RSDWorker, Sieben, Thuztor, Veged and Viceroy to name a few) meaning I now had a rather large pool of buildings to draw from to build the town with.

Make us on a tourist tour! Which places do you think PZ survivors would most want to visit?

(coming into town from the North) Out of your right window you will see Kate and Bob’s original neighbourhood, while in the distance, out of your left window you may recognise the Mansion from the original Resident Evil, which has lovingly been called Bedford Manor over on Blindcoders awesome, fully zoomable map ( http://pzmap.crash-override.net/?desc=BedfordFalls ). Heading further south sees us enter the town/city centre, where there’s a lot of loot to be had if you can navigate around the hordes of zombies.

Futher south again is Bedord Universities’ botany building, the first building in Bedford Falls to feature a sky bridge over a road, and after a hard day’s learning, why not whet your whistle at “Cherno’s” corner bar just outside. If we headed East and/or South from this point you would see rather large residential areas, which make up a large portion of the population of Bedford Falls. Travelling West from the Uni building however eventually brings us to Bedford Falls 5 star hotel, which even has outdoor pools and a garden, with a small police station and all too familiar fire station close at hand.

Travelling west again leads us to Bedford Falls Industrial park and then on to another large residential area just before you leave town. Just south of here is the part of town that has a lot of horror stories attributed to it, thanks to Bedord Falls’ Insane Asylum, a massive, now abandoned asylum for the mentally ill and unstable. Running around here at night will almost certainly see you having many a sleepless night after the fact!

Thank you Ladies and Gentleman, this concludes your tour of Bedford Falls, if you’d like to find your way back to Muldraugh, head west 2 or 3 kilometres from the Asylum, or alternatively, West Point is located about the same distance to the north west of town.

That’s a hard one, I would have to say its between 3 places. I love the Resident Evil mansion and how it has a nice long driveway and is hidden behind some dense trees. Then theres the 5 star hotel which looks absolutely beautiful, and last but not least, the super scary asylum, which is actually the size of Kate and Bob’s whole original neighbourhood.

What next for the Community Map project? How big is it now, and how big is it going to get?

I’m currently working on Version 2 of Bedford Falls. I am replacing some of the buildings I have used more than once (mainly houses and some shops etc) with new buildings from various map modders on our forums as well as quashing any bugs with buildings etc that I have come across so far. I am also “fleshing out” the 4 empty road cells that lead north from Bedford Falls with new military buildings/areas from the forums.

The current version of Bedford Falls is 25 cells big and has 700 buildings with around 7500 different rooms. V2 currently has about 780 buildings with about 8700 different rooms and should be ready for testing in the next few days. Once testing is (more or less) complete I will then be creating the Mega Map Mod, which at first will be incorporating both Bedford Falls and the awesome Dreadwood ( http://theindiestone.com/forums/index.php/topic/7027-released-dreadwood-16/ ) alongside Muldraugh and West Point (that’s 34 extra, full cells!). Then, as more full cell or full town mods are created they will also be added.

The next full town I will be building, with help from the community, is called Newtown, a 100 cell (4 times bigger than Bedford Falls) dense city surrounded by large industrial areas to the east and west and huge amounts of residential to the north and south ( http://theindiestone.com/forums/index.php/topic/6834-newtown-wip/ ). Because of the scale of this city it will probably take a while to complete, so you can probably expect to see a couple of smaller towns/areas in the meantime too, not just from me, but also from the wealth of talented building/map makers on the forums.

How can Zomboid players who aren’t that mod-minded get to play Bedford Falls? Is it in both SP and MP? Step by step instructions please!

Anyone interested in adding Bedford Falls to their game can do so by downloading the mod from the following thread: http://theindiestone.com/forums/index.php/topic/6672-bedford-falls-test-v1/ and following the instructions to install. The map works both in SP and MP. If you want to start a MP server with Bedford Falls installed, simply install the same way as you would in SP and then start a new server.
How can people join in with the community map-making effort?

Anyone who is wanting to contribute to the community map mods can do so simply by creating buildings and/or full areas and posting them on the Mapping part of our forums ( http://theindiestone.com/forums/index.php/forum/64-mapping/ ). There are already some great tutorials both in text format (http://theindiestone.com/forums/index.php/topic/5075-mapping-guide-v02/ ) and YouTube videos ( https://www.youtube.com/playlist?list=PLP83OxbJU9-HvB16MC2wmIdoFsryXsYeF , https://www.youtube.com/playlist?list=PLP83OxbJU9-G3Pb23LgRz_NJsKZGPikE7 ) made by map mod maker extraordinaire to help people get started with creating single buildings or even full maps.

Anything else you’d like to add Paul ‘RingoD’ Ring?

Look out in the near future for Bedford Falls V2 and also for The first iteration of The Mega Map Mod which will include, for starters, Bedford Falls and Dreadwood alongside Muldraugh and West Point. Oh, and for those saying Bedford Falls is quite easy going in terms of zombie numbers, V2 will change that so don’t get too comfortable!