Some sort of pun involving the word 'office' 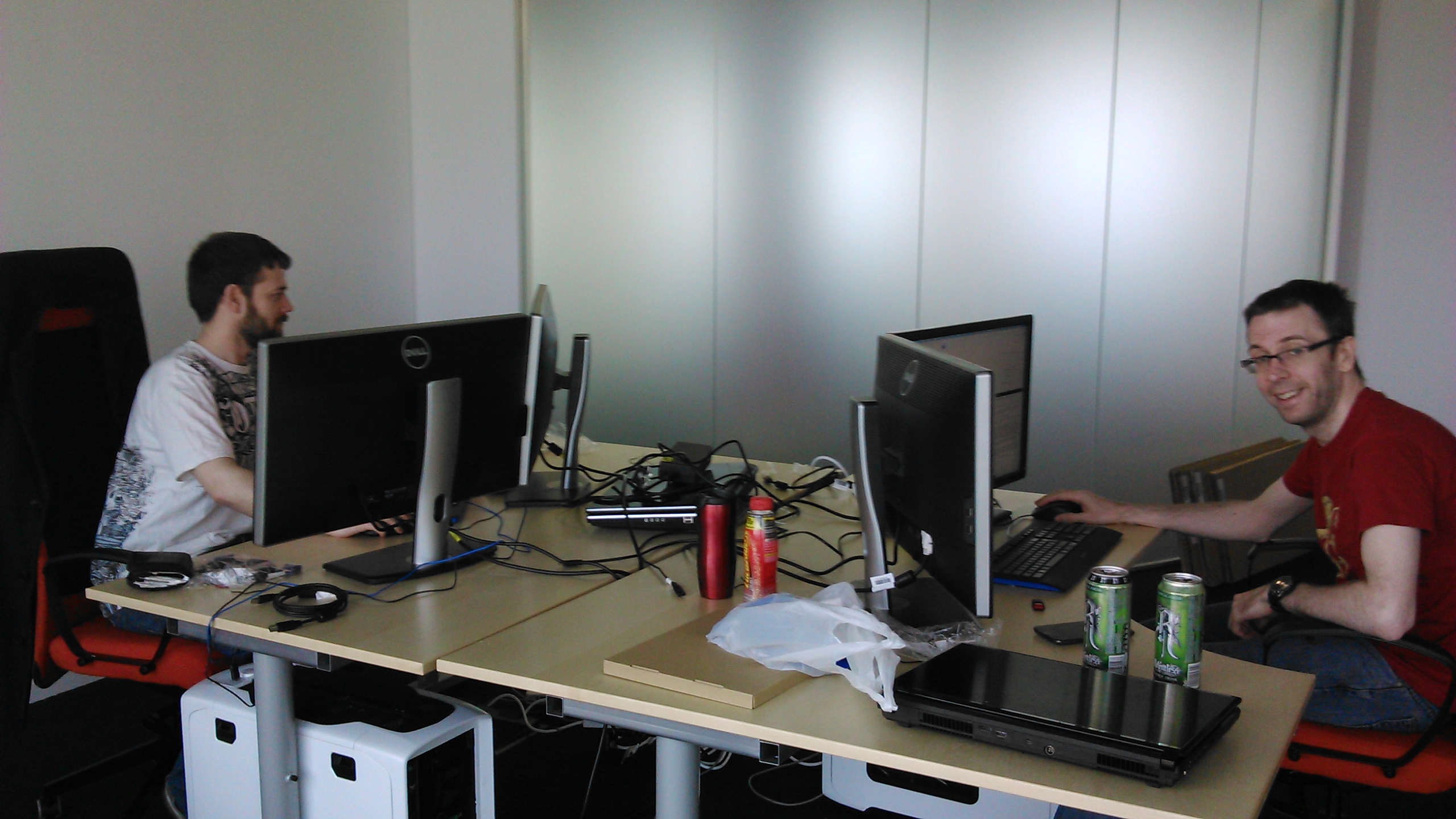 OH NO it’s a Mondoid written by your least-favourite Mondoid writterer, Binky. Sorry but, you know, we have to share this stuff out occassionally to give the only person actually qualified to write words which don’t compile (that’s Will, in case it wasn’t obvious – Lemmy’s words mostly compile just fine) a break from time to time.

So. Hmm… right, yes. First thing – we mentioned we were getting an office, but this Mondoid I can present photographic evidence. Quite how much this affects our status as indie developers is a little unclear at this stage. There are glass walls, so I imagine working in our underpants is a little inadvisable – at least in the short-term.

Forgive the mess but we’ve only just got the desks built – also, this image is a rare opportunity to see what Paul looks like when he’s not wearing a hat. He looks mostly the same except without a hat, surprisingly. The room definitely needs more Spiffo, but we’ll get to that in time. Still, it’s pretty awesome and we’re chuffed to bits.

Romain has also been beavering away expanding the trapping stuff BUT before we get to that, there’s something MUCH more important to discuss. Yes, if you thought we’d already devoted way too much time to the “Pancakes vs Waffles” argument, the “should you put egg in your beef burger patty mix?” discussion (the answer is yes) is giving it a run for its money.

Romain, however, has two important characteristics which impact heavily on this debate. Firstly, he’s French (I’ll leave it entirely up to you to decide if and how that’s actually important). Secondly, he’s in control of implementing the recipes into Zomboid which means he can sneakily decide to omit eggs and not tell us about it.

So given that he has, frankly, horrifically abused his recipe-implementing priviledges AND only today openly mocked us via Twitter by asserting that Spiffo burgers themselves do not contain egg, I thought I’d abuse my blog-writing priviledges to retaliate. So HA! HA, Romain, HA! I have included evidence below:

Where was I? Oh yes, trapping.

So, when Romain isn’t ruining perfectly good recipes he’s implementing trapping. We covered this fairly in-depth a couple of Mondoids ago but we’d like to show you a screen showing you the way that the “zoning” works. Zones are used to identify what sort of thing should be where – it’s a similar system to the way that distributing loot works in that you need control over kitcheny stuff mostly appearing in kitchens and not bathroom cabinets.

So on this picture of Muldraugh you can see the wildlife zones as they exist so far. In the more built up areas (more red) there’d be less wildlife. The sorts of zones we have in the game include town, road, forest, vegetation, deep forest, trailer park, etc. If you intend to make a map mod, you’ll need to place these zones in the World Editor.

Once upon a time, we had items physically displaying on shelves and while that was quite nice in theory what it actually resulted in was a bit of a mess. The inventory items weren’t really designed to appear on shelves so you ended up with weirdly positioned items which weren’t scaled particularly accurately relative to each other (the icons are designed to be readable in your inventory screen so all occupy similar space regardless of physical size). It was also messy and fiddly to click. So we ditched that with the result that the world felt a little empty. You’d click on an empty shelf to find it chock full of books, boxes of nails, etc. Clearly we needed some way to tell empty shelves from full shelves at a distance.

What we’ve decided upon is multiple versions of the container assets – empty, half-full, full – so that you can tell the difference between well-stocked and unstocked containers from a distance, even if the items displayed aren’t exact. While it would be nice to see everything 1:1, as I’ve said this results in a bit of a mess in practice whereas this way, Mash gets to draw nice neat alternate assets and everything looks a little swankier as a result. You can see an image of this from within the game below:

I should note that in that image, we’ve deliberately set the buildings to have a large amount of loot. Buildings will not tend to be as well stocked as that in the actual game.

Thanks to everyone who bought Zomboid during the Humble Store Spring Sale, we were invited to participate in the “review sale”. If I’m honest, I’m not 100% sure what a “review sale” is, but that’s what they called it in the email and I don’t suppose it really matters. What *is* important is you can snap PZ up for less *and* support charity for another day or two. Hooray!

You can find the Humble Store here!

The final thing I’d like to say is a gentle reminder that our swanky e-mail announcement thingummywhatsit is up and running so you can get a notification of when we do stable builds, unstable builds, Mondoids, etc tenderly deposited into your favourite e-mail delivery system.

26 OUT PROPER ON STEAM