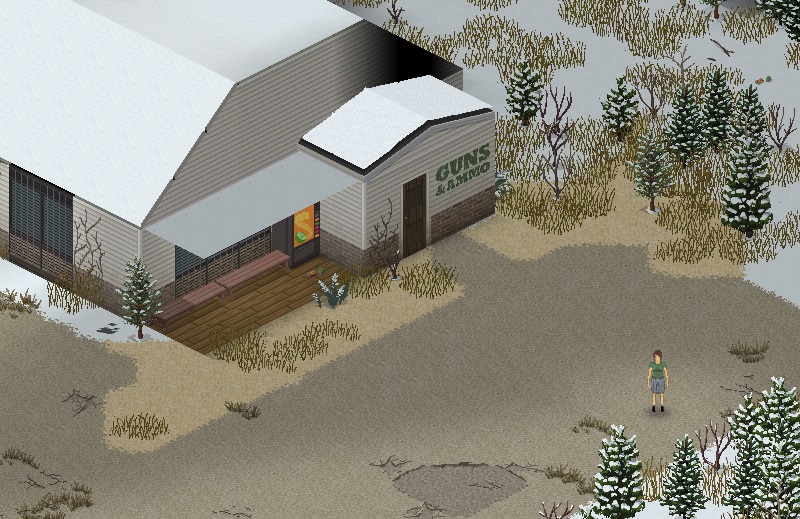 Hi everyone! We’ve got quite an interesting Mondoid this week as we chat with modder extraordinaire TurboTuTone about how he’s collaborating with TIS, and Mash specifically, in taking the basics of his Erosion mod and making our little patch of Kentucky more seasonal and overgrown place than ever before.

Before we get to that though, a few items of Zomboidy housekeeping!

1) The second Build 29 Hotfix is now live on the IWBUMS branch – to see the patchnotes click through to here, while if you’re unaware of IWBUMS and what it means to you then have a look here.

2) If you’re in need of some visual feedback and would like to see our own ‘Captain Andy’ (aka Binky Hodgetts) fielding some excellent questions from Adam Straughan and some queries collated from our lovely PZ subreddit, then have a look here.

3) The Public Server List is back in-game for the time-being, after some sterling team effort from Romain, Kirrus and Brybry. We can pull it back down if/when we hit any bumps in the road, but for now finding MP games will be a smidge easier again. Please note, however, that we need to do a little extra work before Nitrado servers are visible – bear with us on that one.

4) Oh and, before we get into the matter at hand, a quick thank you to Mathas and Dean Cutty for taking the time out of their busy YT schedules to create a new and amazing Steam gameplay trailer for us. Much appreciated guys!

With that all in mind, then, what of our collaboration with the awesome TurboTuTone on Erosion?

Hello Mr TurboTuTone! What’s your real name, where do you come from and what do you do in life?

Hello there! My name is Kees Bekkema and I’m from the Netherlands. I’m unemployed, so in the event of a zombie apocalypse hitting I, sadly, get no extra traits. I spend my days modding and coding, mostly.

So how did you discover Project Zomboid? What has your relationship been with it?

The game had been on my radar for a while prior to buying. I think a friend tipped me towards it, and I liked the Romero style zombie lore and old school isometrics. I remember at some point playing a test or demo version, and that made me purchase it on Desura for what… £5 at the time? Considering the revenue in terms of fun it’s been one of the best game investments I have made I must add! [Ed> Thanks Turbo, the cheque’s in the post.]

It took a little longer to get more involved with the community and everything surrounding the game. That started to happen when I looked into modding.

For the unitiated, can you explain what the Erosion mod is? How did it come about?

Simply put, Erosion ages the map by showing the gradual reclamation of nature and the deterioration of roads and buildings. Additionally, since so many objects in the game are nature based, it also adopts some mechanics for seasonal change.

The mod came about pretty much by accident. I was getting myself acquainted with modding to see if I could add a craftable bed to help me in a save game. Through an unexpected process of exploration and experimentation, however, I ended up with a prototype of Erosion.

That early version was rather bare, and placed objects at random with no patterns or growth stages. I decided to give it a go and show it on the forums, just to see what would happen, and I was surprised when it gathered quite an interest and a lot of positive replies. The support from the community has been great ever since in terms of suggestions, feedback and information – all of which has been very energizing as I improve it.

So now Erosion is becoming a part of the main game, how will things change?

The most obvious changes are the sprites. As you may know, Thuztor did a wonderful job at creating sprites for the mod, but sadly he had to discontinue his work due to a new job.
As such this integration has a completely new batch of sprites was required due to mechanics changes.

I’ve had the pleasure to work with The Indie Stone’s MashPotato on this, and I must say she’s done an absolutely amazing job at creating the aesthetics. I’ve actually done a little count and as of right now she’s added 760 (!) new sprites, covering what must be 75-100 new object types. To give an impression of how these objects work here’s a screenshot:

The above image shows a river birch – all plant life Mash has created is authentic and common to Kentucky. Not only does the tree have four stages of growth to go through, but each stage has several different seasonal states.

Something else that’s new is that all the objects change seasonal state individually. When the season changes from Summer into Fall, for example, you’ll start seeing a few trees turn yellowish. Then, gradually, more and more will turn.

A lot of smaller plants also have a bloom period set depending on their type, and again within that set period individual plants will pop their flowers at their own pace.

Formerly, the Erosion mod had a very simple system based on static months (so all of a sudden ALL sprites would swap to Spring on the 1st of March) the new system can be best explained by looking at an exciting graph.

The graphic above depicts Output values of the Season System for one year, and each grey column in the background signifies one day. Below, you can see where we can input values required for the graphs creation: the latitude for daylight hours, temperature information, monthly rainfall and numbers of seeds.

Then, finally, in the bottom part of the graphic itself you can see horizontal coloured bars that represent the seasons that have been created, and their duration and strength.

Seasons will change: one year you’ll be presented with a harsh long winter, another year it might be rather mild and short. The strength of summer and winter also influence the mean temperature (green line), which is a guiding value used to generate the actual per day temperature data (red line) which gradually changes between warmer and colder periods.

Also in that bottom area of the graphic are rainy periods, which coincide with cold snaps – as it usually gets a bit colder when raining. When it’s winter and the temperature is below zero it’ll snow instead.

Finally (!) the flora of the natural world is now affected by soil type. As such, as you move around the map the compositions of nature will change. One moment you could be standing in a region dominated by oak trees with certain types of bushes and plants, and as you move this will slowly fade into other varieties. Some compositions are also rarer than others, and all of this will have an impact on the current map’s wilderness.

Holy crap. As the lowly writer I genuinely had no idea there was that much going in! What needs to be done to get this into the game, or the IWBUMS test branch?

Well I guess the final working process, in short, would be something like this: finish up loose ends of the mod, fix and revamp some stuff, add some new bits and pieces, getting it into the full game and then testing and bug fixing.

We’re approaching the point at which we can actually integrate it, but there’s still stuff to do – for example EasyPickins is currently overhauling the way chunks are handled in MP to combat some issues with Erosion stuff getting synced correctly. So, while it may seem rather functional right now, there’s still some time we need to invest before it can really be considered finished.

I have no idea really! I’ll see when time comes, so not much to put here sadly. But instead of wasting the space reserved for this question I’ll just whack my keyboard for random characters to fill it up: “asdgfdisbfs http://www.twitch.tv/sirtwiggy ashfoahfosah”

Go check him out! Lots of streaming of both Project Zomboid and Erosion, he has also been testing most versions of the mod including the current integration version.

Thanks for you time Turbo! Say bye to the Mondoiders!

Be sure to check the upcoming version post and subscribe to our newsletter  to be sure you won’t miss anything! That’s it for now. Thanks so much for living and dying in our game! Love y’all.