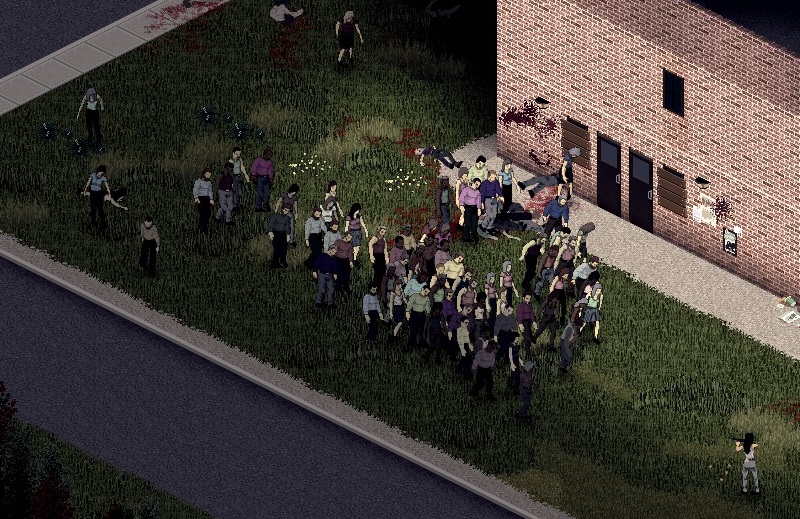 It’s always a bit of a weird one when we release a new build publicly of a Monday. It’s a Dulldoid for our wonderful IWBUMS-ers who’ve been there, done that, reported the bug and ripped their t-shirt into bandages.

But then again, it’s a resounding Fundoid for those who don’t partake in our public beta – and those who boot up Steam to see an exciting progress bar next to the words Project Zomboid. Just imagine that joy for a second…

Which is all as much to say, that on this day Build 31 came out to play.

You’ll be able to find the full changelist here!

News on Build 32 will be fermenting throughout the week, and will no doubt be mulled over next Monday. Meanwhile we’ve had really good progress on NPCs this week (but will hold back details so we don’t re-engage the hype machine when there could still be bumps in the road), meanwhile Turbo has been given a first test radio station script for integration while Will is filling out all his existing spreadsheets to fill the now wider daily schedules. The foundations of the Louisville map, meanwhile, continue to spill out of RingoD and Binky’s paws in preparation for Mash’s building deployment.

It’s all go basically. Fun times are ahead. And welcome aboard if you bought the game over our Steam Sale weekend! Good to have you with us. Try the bleach!

Today’s featured image from Overstalker! If you like your Mondoids and you like emails clogging up your personal inbox, why not enquire within and receive our newsletter every week, or on every build release?

What’s in the box?