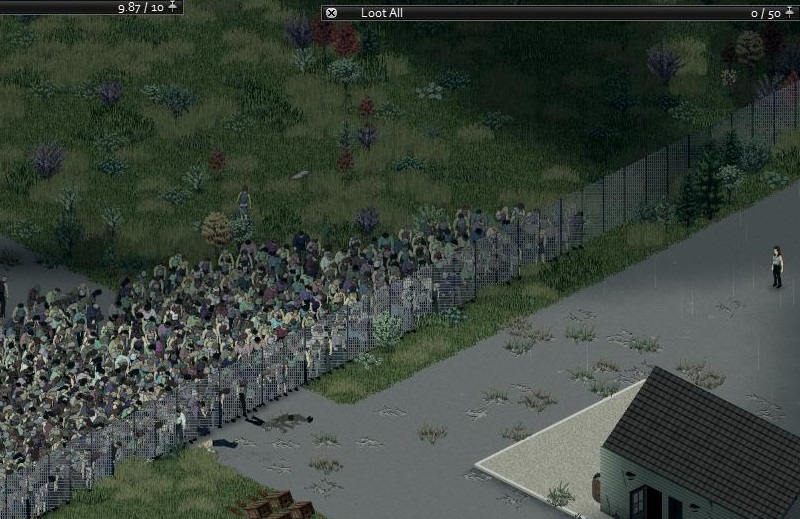 We were on a train. Rain spattered the windows as we pulled into London Waterloo beneath an ominous grey sky. The topic of conversation was Project Zomboid and Steam MP Integration, and how our engine made it a time-consuming challenge. The eyes of my companion quickly darted upwards, and he suddenly leant forward.

“I’m only going to say this once, so you need to pay attention” he hissed. “You need the Russians. They’re specialist operatives working out of Bali. They’re expatriates: an elite coding taskforce that answer to no company or agency. Highly specialised. Highly trained. They get the job done. No questions asked.”

“They survive as coders of fortune. If you have a problem, if you need to concentrate on developing the main game yourself, and if you can find them. Maybe you can hire: General Arcade.”

And so we did.

This new Steam multiplayer integration, most likely to arrive with Build 33, is the first step in us both making playing online easier for players and in combating cheaters.

Essentially you’ll be able to both play and host Steam servers. These will work identically to existing servers, but they’ll also be able to take advantage of additional Steam functionality. So that’s stuff like: inviting friends to your game, joining friends on the server they are on and [most crucially] the identity of every player being bound to a Steam account.

This means, while hacking will still be possible, server admins will be able to ban a hacker permanently. What’s more, no amount of trickery will get them back on beyond repurchasing the game on a new account.

This is just the first step too. Once Steam is integrated, we’ll be able to look into options for increased cheater protection – and potentially VAC if it proves suitable and available.

We’ve also made some exciting progress in a certain Steamy Workshoppy area recently, and in fact have something super exciting afoot which should result in an explosion of user generated content. We’ll hopefully be able to talk more about soon. Further off in the future, meanwhile, we will of course be looking into the possibility of VOIP, and implementing other areas of Steamworks.

It also goes without saying, for those who want to retain their Steam independence, we’ll always try to provide non-Steam alternatives where practical. Public servers aren’t going away.

A big thanks to Serge and Gennadii from General Arcade for all their hard work over the past month! We hope this is the beginning of a beautiful friendship.

Apologies for a rather MP-focussed Mondoid this week, but clearly getting outside specialists in for this sort of job has meant that the core team has been able to concentrate on the main game rather than standing around and banging the Steam interface with spanners.

Also on the menu this week [amidst all the usual big stuff and secret missions] has been Will’s radio and TV spreadsheet that’ll document the last week of civilization hitting the 40,000 word mark – out of an estimated 50,000. Turbo, meanwhile, has been finessing his movable furniture system and experimenting with a less cumbersome UI [new WIP video here].

It’s early days yet, so we won’t go into detail until a later Mondoid, but RJ has also begun work on his new crafting menu. It’s a UI that’ll complement rather than replace the usual ‘right click to craft’, but also make what you can build and the recipes you know far clearer.

Oh hey, look at this there’s a game called Project Zomboid and it’s available for purchase at 20% less than it usually is during the Steam Summer sale. If someone reading a weekly Monday development blog casually mentioned this to their friends (all their friends) then maybe extravagant zombie fun-times could occur? [Oh God. Sorry.]

Our very own EnigmaGrey would like it known that we’re launching a new TIS server – it’s easy, PVE and eminently noob-friendly. Now available at fluffyfoot.theindiestone.com, port 16261. He can now consider it honourably Mondoid-mentioned.

That’s all until next time. Enjoy all the trailers spilling out of E3 this week! Fallout 4 looks every colour of awesome doesn’t it?

This week’s featured image from Prototype2001 on our very own forums. Would you like to receive an email filled with this sort of content every week, instead of laboriously having to remember to look yourself? Fear not: help is at hand in the form of our Mondoid Mailout.

A Nice Cup of Tea