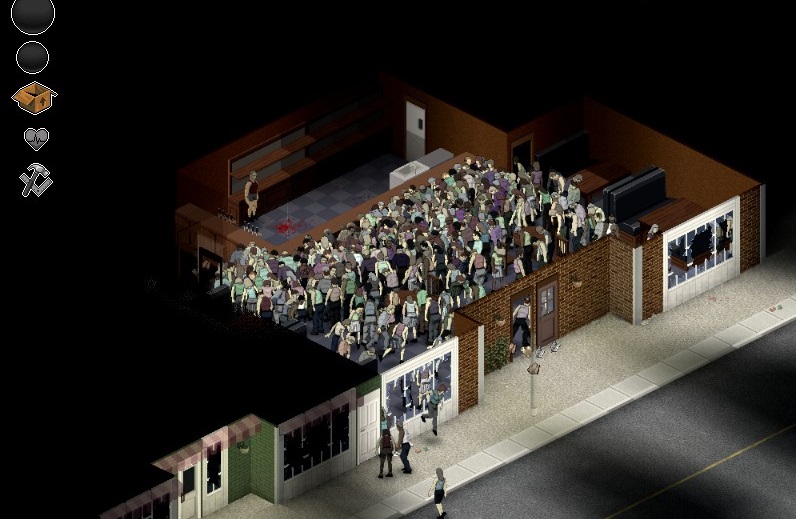 Hi everyone, here’s your regular Monday dose of Zomboid – which can be read here, or bitten/scratched into your skin before becoming infected, entering the blood stream and recoding the entirety of your brain with these very words repeated again and again, alongside a hunger for human flesh.

EasyPickins is making good progress tying the Steam integrated MP packages provided by our friends at General Arcade into Build 32. As such he’s currently finishing up on the systems that will let clients connect to PZ servers using their Steam accounts, let server admins ban players by Steam ID and allow Steam avatars and profiles pop-up in the ‘players’ list in-game.

This will also, of course, allow for the ‘Invite Friends’ function so you can drag buddies up and onto whatever server you need some camaraderie upon. If, meanwhile, you’re of the inclination to create your own server then the other half of EP’s current schedule is in creating a proper dedicated-server package that anyone can download from Steam, or install using SteamCMD.

A large part of Build 33 will be in adding context and flavour to Project Zomboid. The radio and TV broadcasts will introduce the first few layers of our back story in the opening weeks of survival, while a new degree of safehouse customisation is also on the cards through Turbo’s furniture movement and rotation system.

Another aspect of this [particularly aimed at SP playthroughs, but also present in MP] will be in making our world feel a little more ‘lived in’. Currently West Point and Muldraugh feel a bit cookie-cutter: doors are uniformly shut, houses are clean and it all seems a little uniform and airless. As such Will is currently working in cahoots with RJ to add some texture to the Knox Event through subtle randomised events.

Nothing is coded just yet, and as such is clearly subject to change or reprioritisation, but we want to gently evoke a feeling that there was once normal life here and that one day disaster struck. As such we would like televisions and radios left on in homes, evidence of home-dwellers who had particular careers/hobbies through the items and books they left behind, cold rotting meals left in ovens, general detritus left on the floor, and even occasional entirely empty houses that were not being lived in at all.

Playing around with locked doors, and what internal and external doors were potentially left open when the occupants left in a panic, is also likely to be a big player in this new push for zed flavour. You wouldn’t necessarily expect every item you find to be in 100% condition either, so soon some baseball bats will be more reliable than others.

We will also be looking to include randomised discoveries for later days in your survival experience while our NPC system is still waiting in the wings. We’re thinking pre-barricaded houses that have succumbed to zombies, burnt out buildings and already looted homes. Then, of course, there’s all those dead bodies lying in pools of blood next to empty whiskey bottles, modified weapons, nail-bats, Spiffo plushie collections and bottles of bleach.

Likewise part of this push will also be in refining world events. We’re going to look into giving Helicopters, arguably more of a pain after Build 32, on-board snipers to take potshots at zombies for example – while the imminence of the electric shut-off could be foreshadowed with flickering lights, regional brown-outs and intermittent supply for a few days. This would mean Muldraugh could lose power, for example, but West Point keeps it on in MP.

As mentioned before none of this is set in stone, but we hope that it gives a fair indication of the direction we want to be heading in once Build 33 descends upon us all.

A quick notice that Project Zomboid developers and various esteemed community colleagues will be attending this year’s EGX in Birmingham (UK) 24-27 September. We’ll have the game playable on the show floor, and will also be looking to arrange a community meet-up in a nearby Wetherspoons on the Saturday (options are limited at the NEC).

At the behest of Comrade Connall, we just wanted to wave the PZwiki in your direction. It’s a great site, but in need of contributors and edits as PZ continues to evolve. If you fancy helping out then inquire within.

This week’s featured image from Minus_kot over on Steam. Fancy getting zombie stuff every week and at other key moments generally pertaining to Project Zomboid development? Click right here.