And Workshop for all... 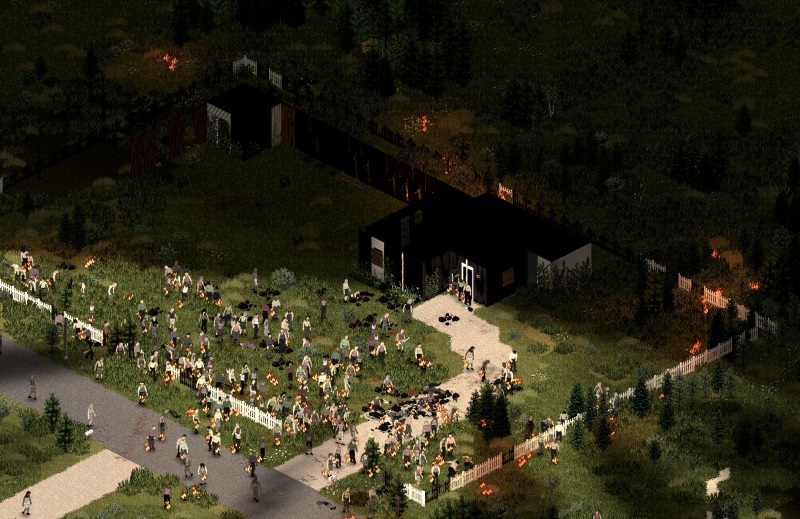 Happy Mondoid everyone, we bring news of Steam stuff. Build 32.27 is now out of IWBUMS testing and live for everyone, which means that a whole new world of Steam Integration is now ready for Zomboid infection!

You can read the full patch notes here, but the headlines run as follows: Steam Multiplayer via dedicated servers that can be installed and updated using Steam CMD, Steam Workshop for the upload and download of whatever User Mods/Maps tickle your fancy, and of course Steam Broadcasting. There’s also a bazillion (estimated figure) bug fixes that come as part of the package.

We’d like to thank the fantastic guys at General Arcade for laying the groundwork that would allow us to tie PZ closer to Steam [which is genuinely no mean feat, given that it’s built in Java] and of course to the tireless work of EasyPickins who got into the back-end’s guts and tied it all together.

We’ll continue to improve it all as we go, of course, and right now are super excited to see what mods and maps appear and go on to flourish.

So, where are we at with the next build? Read on, reader.

After the first batch of Creative Mode internal testing we’re currently adding features such as ‘Undo’ and more powerful editing tools. Testers were really excited about Creative but it did spotlight fiddlier areas, and we want it to be smooth as butter upon release. We’re also going through it all with TIS map-makers Andy and Paul and making sure it’s a valid tool to speed up map production upon release, as well as flood Steam Workshop with recreations of your home towns and favoured tourist destinations.

All of Turbo and Will’s bits of Build 33 will be going into internal testing this week, after an initial smaller-scale MP test today or tomorrow. Aside from polish, that’ll go on from now until release when required, all narrative content for 33 is now a lock – coming in at 7046 lines, spread over 546 broadcasts, covering 11 stations and playing out (in the main) over the first ten in-game days of play.

As well as coding into WordZed the facility for translators to easily track developer changes in the master spreadsheet, Turbo has also been making sure that the zombie inhabitants also appreciate the cosy glow of a CRT if someone human is speaking…

Our resident Frenchman is off on honeymoon at the moment, a decision that clearly appalled us, but is currently working on something that’s still unannounced which will go into Build 33 if it’s finished in time. It’s essentially finalizing some work that will integrate PZ with some pretty awesome middleware that’ll have a massive impact on player immersion and your awareness of the zeds, but due to us having to sort out the license and boring stuff like that we can’t share explanations or videos just yet. Suffice to say: it’s pretty cool. On top of this, clearly, there’s also the botany work and ‘lived-in apocalypse’ features that he already has in the bag.

We get asked all the time about Project Zomboid merchandise, as it seems a lot of you really want raccoon-emblazoned shirts and posters to make your life complete. It’s really tough to know quite what the demand for this sort of stuff would be though, so (when not conducting her secret mission) Mash has been working on a test run of art prints that will (most likely) be on sale at the upcoming EGX gaming show in Birmingham later this month. [Edit: Mash wants it known that Andy did the heavy work apparently].

If everything goes well then we can think of ways to extend merchandise outwards to the online world, and if it goes really badly then we’ll have several crates of unwanted Spiffo imagery to get rid of. Whichever way it goes, it’s likely that interested parties from the internet will eventually benefit.

You can get a sneak peek of the art prints and vote on what size you’d be most interested, here. Meanwhile, here’s the Spiffo that may well adorn the garments of EGX attendees.

This week’s featured image is an amazing hellscape from Akamai over on Steam. That’s it for another week, so all that remains is for myself – the italicised central block of text – to inform you that the PZWiki awaits your input and that the TIS Email Subscription service can forward Mondoids and Release news to your inbox. A good day to you Sir, or Madam.