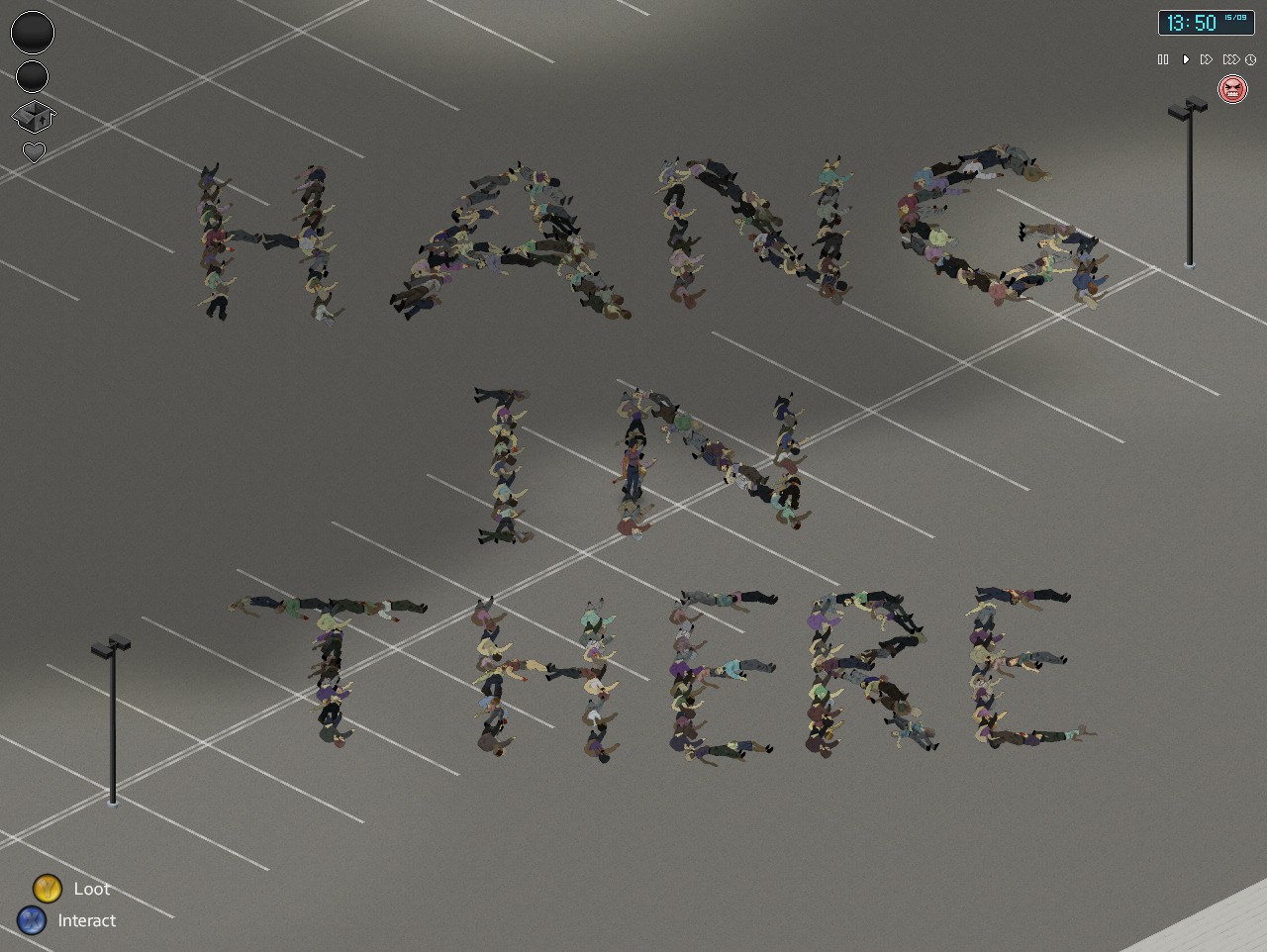 Hello everyone and welcome to another fine (or dreary) Monday (delete as appropriate)! Today we’ll have a chat with the awesome Martin, who has been plugging away doing a whole wealth of animations and models to add to the game. THIS IS NOT FOR BUILD 33, as it comes with a rewrite of movement, combat, and practically every player and zombie action in the game, but it should be finally ready for build 34. Then the runway is clear for take-off with the final stage of [REDACTED] development, which while still some ways off will finally have all the jigsaw pieces laid out.

Before we say hello to Martin, a quick update on…

Now we have finally gone gold on the Steamworks build of PZ, we are all united in our efforts to get build 33 ready for some IWBUMS action. Still some work yet to go, however everything’s looking really sexy with Turbo and Will’s immense lore injection, creative and all the other funky things going into the game.

We’re still keeping quiet on ‘the cool new thing’ that’s been integrated in the game, which we don’t want to admit exists until we sort out licensing. We’ll give a hint though and let you know the cool new thing will sound cool when you hear about it, there are many dimensions to it, and it’ll help massively with immersion while allowing us to fix the whole meta-sound system to be fairer and more interesting/deep. Particularly those metal dragons that regularly mess up people’s days hunting overhead.

Creative work continues apace, with all the little details and features to try and magnify the speed at which people can create nice looking buildings and terrain. The latest feature to be added is a custom palette, where people can grab an area of the world, or save out a TMX file within TileZed, and use that as a palette they can keep  on-screen to select bits of to place into the world. Undo is more or less finished, but requires some extra work and thinking about to protect against paradoxical multiplayer undo moments (think about it for a while and it’ll make your head hurt).

It’s just a case of identifying all those things that take the most time, or end up looking unpolished and are fiddly to complete, and removing as many of those until it becomes feasible to use. We have Binky + Paul as a good litmus test for this. When we feel closeish to another closed testing round, we will then determine what we do after that.

Hi Martin, it’s been a while since last we spoke! Can you give a quick run-downon exactly what you’re up to in terms of animations? If I remember rightly your workflow went ‘polish existing’, then ‘stealthy movement’…. what came next?

Martin: Well I’ve done a far bit since we last spoke so I’ll have to see if I can remember.

I started off polishing Captain Binky’s existing animations, which at the time numbered around 67-ish, and then moved onto the stealth/cover anims as you said.

Doing the stealth/cover anims opened up a few issues regarding the characters movement and just the complexity dealing with moving in, out and around cover, code wise. There’s a whole load of cover anims waiting to be implemented that I’ll revisit once the cover system is coded up fully.

So not to be stalled I moved onto anims that the team had wanted for a while, mainly stumbling and obstacle navigation (not to be confused with cover!). You may remember Lemmy recently posted a vid of the character stumbling over a picket fence and climbing a high wooden fence along with new accelerating and decelerating locomotion anims.

The new anim system also allows the character to move more fluidly whilst you’re in combat which requires a slew of anims across each of the weapon types.

I’ve also tried to fill in some gaps where the character wouldn’t do anything during an action. So for instance there’s a hammering anim for constructing barricades, a chopping anim for cutting down trees, a lock picking anim, that type of thing.

There are quite a few other animations that have been done but as with anything, they need implementing through code and the areas they cover may get re- designed. There’s a few anims to work with but they may need tweaking when that part of the game is worked on.

So where are we currently at with the animation update?

Lemmy is constantly spinning the proverbial coding plates and is due to give the animation system another spin soon once he’s finished with the stuff he needs to do for Build 33. Obviously no ETA’s but soon™

Would all of your work go into the game in one go, or would it be drip-fed over a series of updates? How would it work?

Because my anims cover different areas of the game they’ll be drip fed into the updates once the underlying animation system is working.

Although things my change the first update will probably cover general movement and some obstacle navigation (fence climbing, etc) with stealth movement. The cover system will follow in a further build since it’s quite a complex system to code.

After that it’ll be a case of when the anims are implemented, for whatever area they’ve been done for (ie farming anims, injuries, combat overhaul etc.)

What are the technical challenges of this sort of animation update? Will everyone be able to use the new system?

Lemmy: I’ll interject on this one. This is still up in the air as to whether people with no shader support will be able to use the new anims. Anyone who has the ability to use 3D models currently will be able to, and a few more than currently can use 3D models will have that available to them. This is down to the fact I’ve managed to exile the requirement for individual draw targets for each of the characters. They are just drawn into the scene like anything else, instead of requiring FBO weirdness under the bonnet. The upshot of this is if you’re one of those whom can’t use the zoom, there is an outside chance you will gain 3D model support, but I wouldn’t want anyone with really old machines to have false hope.

We’re still trying to figure out how to deal with those who cannot use 3D models and make sure there is no detriment to their game (beyond missing the pretty anims) but just be aware that we’d wanted to take the 2D characters out completely and are avoiding that since it’s clear we’ll never get 100% of people who play Zomboid using the 3D models, so we’re doing our best for those with low spec PCs but there’s only so far we can go. I have a plan that MAY allow the player character to be animated by the CPU which would remove the GPU requirements and give 3D player character to ALL, but it’s early days so don’t know for sure if I can pull it off without a severe FPS loss, it’s by no means a promise. But, we’ll see! But to the low spec people out there, we’ve got your backs as much as we can without hurting development for the majority, we promise!

Do I understand it that you’ve been object modelling too? How did that come about?

Martin: I was looking to do some farming anims but realized that many of the objects didn’t exist as a 3d model. When you animate its good to have the object you’re animating with as you’ll never be able to guess the exact size and shape and will have to tweak the anim once you get the model.

In big companies you tend to specialize (in my case animation) so I’ve never had the opportunity but I know the basics and have “dabbled” in the past so did a few testers.

The guys liked them and were happy for me to do more, so I did. And a bit like with the anims, I’ve tried to cover objects that were missing, so when they go in expect to see a crowbar, scissors, spoon, a hunting knife and the like as well as some newer (but just as mundane) items like a rake, pick axe and a hoe!

In a recent Mondoid there were whispers of jiggling backpacks. Is this true? Do you have proof?

It’s true and here’s my proof!

Please bear in mind this is work in progress, I still need to finalize the skin weighting!

Tell us more about the hats!

Well, after modelling some objects I looked into doing some hats, as these seemed like a relatively “easy” thing to do technically, but would be a big “gain” in character customization. I mean; who doesn’t like hats?!

Well; me actually. I don’t look good in any kind of hat!

But I know people love their hats so my main concern was to do a broad variety but not to make things ridiculous, it is the zombie apocolypse after all. So you won’t be finding any top hats or monocles just normal everyday head gear the average Kentuckian may wear. Spectacles included.

I won’t list them all, as I have ideas for more, so once everyone’s happy with what we’ve got we can do a more comprehensive list. (Though here’s a few pictures!)

Anything else you’re working on, or would like to?

I hear a lot of talk of dragons so; fingers crossed! In the mean time I’m looking to do some more clothes and some textures for existing items, denim short shorts are a real possibility. We’re also looking to enhance and re-jig the character UV’s and textures so we can have limb specific blood splatter but that’s for further down the line.

Animation wise I’ll look to do some anims with the new items I’ve modeled and continue to tweak existing animations, and add more, once the new system is in and fully working.

Thanks to “Imperial WalletSqueeza” for the title image. Do that wiki thang and subscribe if it tickles you to do so.