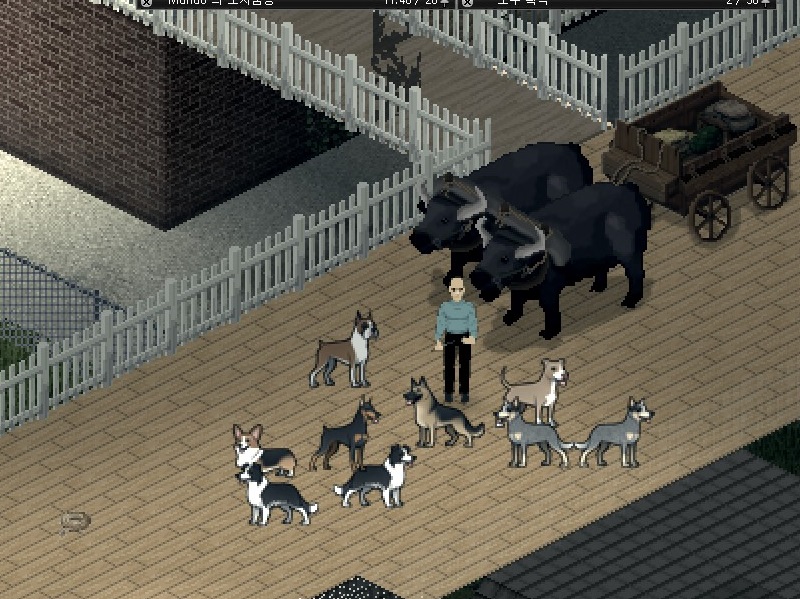 Now Project Zomboid has been plugged into the mainframe of Steam Workshop, we wanted to turn a spotlight onto our community’s most popular creations. Our first victim? None other than Hydromancerx, the creator of the evergreen rolling ball of content that is the excellent Hydrocraft!

So for those who’ve never had the pleasure, what is Hydrocraft?

It’s a mod based around crafting and filling in the world of Zomboid with extra stuff. It’s inspired by survival crafting games like Haven and Hearth, and is a compilation of many other smaller mods, abandoned mods and my own designs. The overall goal has been to allow for crossovers between mods and then to add-on to them.

So who are you in real life? How did Hydrocraft come about?

I’m a guy who loves designing and modding games. My last project was a mod for Civ 4 called Caveman to Cosmos. It was a huge kitchen sink mod that I co-founded which, much like Hydrocraft, attempted to build on other mods and make them better. It’s still being worked on too.

As for how this game about, well I was getting a bit burnt out from modding Caveman to Cosmos, so I tried a few other games like Skyrim and Starbound. I had also enjoyed Project Zomboid, though, and wanted to mod it. The PZIC (Project Zomboid Item Creator) by RyuuDZ helped me get my feet wet, since it’s all a bit different to what I had been used to with Civ 4.

Once I learned the basics I tried to get some former Caveman to Cosmos team members to help but I did not get too much. However, I had a friend (Yossitaru) from an old gaming forum I used to go on in the pre-Spore days. [Back in the day with Spore I made a popular creature called the Naucean, and even set up an alien ecosystem game called Sagan 4 where you evolve species one at a time over many generations. It’s still going to this day!]

I have a Bachelors of Science in Game Art and Design, but I basically have to learn all my coding from other modders – so Yossitaru helps me with most of the lua that I struggle with. On top of that most of the art is done by others too, not because I can’t draw but because I don’t have time to draw and code! You can see my art here.

So how did Hydrocraft get its name? What makes you the Hydromancer?

Well, back when I modded Starbound I made a bunch of mods like the alien flora from my Spore ecosystem Sagan 4, an alien head mod which included my Naucean and… a crafting mod called Hydocraft.

Hydrocraft was going to be my next big mod, but because there were other popular ones like Frack’n Flora and it was hard to keep up. Many of those mods were named after their creators, so I just named my mod after myself too! So, when remaking the mod for Project Zomboid I kept the name, even if they were different and even though the PZ one is now WAY bigger!

How many new items and recipes can be found in the mod now? What sorts of categories are we talking about?

Yikes! Well, as of the recent release of v3.7 I have 1,873 textures! Some items share textures or use base game ones, while other items like rotten fruit need more than one. So if I had to guess it’s probably around… 2000 now? I lost track around v2.0!

There is just so much in there. Everything from the Extended Cooking from mods like CCCP, to a whole bunch of weapons: a makeshift bat, medieval weapon, katana, crossbow, longbow, rocket launcher, flamethrower… all that good stuff. We also have a lot of Haven and Hearth-type crafting when it comes to Cheese Making, Sausage Making, Bee Keeping, Silkworm Farming and Herbalism.

On top of that we have a bunch of stuff to fill in the world with mundane items and clutter you’d expect in bathrooms, kitchens, offices, labs and other locations. We even have a bunch of toys and sports equipment you can play with. And a TON of textbooks, as you need to learn all these new recipes from somewhere.

Finally, sort of,  there’s umbrellas and raincoats that work, maps that lead you to places on the map and a bunch of different types of bags… wheelbarrows, covered wagons, luggage, fannypacks [EUROPEAN EDIT: that’s American for bum bag, even if it does sound rude], cardboard boxes and more!

Well having done Caveman to Cosmos I knew how big mods can get. This is still small compared to that mod. I also knew that “kitchen sink” mods benefit from those who have already done the work, so it’s a matter of gathering all those mods into one single master mod so we can allows the items to do more than they ever could if they remained in separate files.

As such stuff like the Homemade Bats mod by Dudeman325 was combined with our own items, like the Monkey Wrench or Hedgetrimmers, and we could make brand new items! On top of this, I wanted to add in recipes I enjoyed from other games like Haven and Hearth or Starbound – not to mention the ground I had covered with lots of crafting paths in Caveman to Cosmos.

So, in short, yes, it has gotten bigger and bigger – but it’s because I have dreamt big from the beginning. There’s so much I still want to do, and those who have helped out have added far more than I had initially planned.

What’s your favourite ‘new’ stuff that you’ve introduced? Am I right in thinking that you’d like every item, even filler ones, to eventually have a use?

I really like the new Covered Wagons, which have artwork created by DeadlyStr1ke. I’m a fan of Oregon Trail, and Haven and Hearth has one too. Sure, they are just huge bags that look like a wagon but still they’re still fun to look at in-game!

You mention that it’s inspired by Haven and Hearth. What is this game, and how has it influenced your work?

Well, the Haven and Hearth guys just came out with a sequel that has the same name, after working on Salem, but my inspiration is from their original game. Haven and Heath was free (although it isn’t anymore) and everyone played on the same server – but the crafting system really stuck with me. In fact, one of its modders let me use their art for Hydrocraft, specifically things like bear and deer art. You can see her work here.

What’s next for Hydrocraft? How far can you take this?

In the short team it is basically a game of catch up with all the art people have been making for the mod – thanks so much guys! I have also recently been adding stuff from Cyrrent Eiledoll and his Breaking Dead mod which adds Breaking Bad themed stuff, Junkyards and Power Generation.

In the long term I’d like to make the animals actually move, and explore what’s possible with place-able objects a little more. Beyond that, I also want to build up on the technology side of crafting just like in Caveman to Cosmos that took you out of the Stone Age and toward bringing back civilization – I was going to try to use its tech tree in Hydrocraft, but I think it’s probably a bit too complex overall.

You’ve joined forces with a lot of other mods to make Hydrocraft so wide-reaching, who have you collaborating with?

There are so many now I do not want to leave anyone out so please go to my forum post and look them up in the credits! I really do appreciate everyone who has helped, everyone who created the mods that I have merged, and all the feedback from players as well as you guys at TIS!

Besides Yossitaru though, I must single out one particular person who has been linked from the beginning to the success of the mod and my drive to keep modding. That person is the YouTuber known as NoMiS. His Let’s Play videos not only help me see how people play the game, but also helps to find it. His rise in YouTube subscribers and my rise in steam subscribers are no doubt linked to each other!

I should also mention that I have been working with the New Dawn a PZ RP Whitelist server and that they have allowed me to view players via Admin mode. We have worked together to make both mod and server better. They help me balance while I help them with props such as Passports, Radio Antenna and a TON of broken down car props, from normal cars to school buses, fire engines, police cars and even a cement truck! They have been nothing but kind and awesome! When I do play multiplayer I very much enjoy their server.

What other Project Zomboid mods would you recommend that people check out?

Well most of the mods I loved are already merged into Hydrocraft. However I do like the Wooden Dowel Mod, Spray Paint Mod and the Irrigation Mod. I also very much enjoy the various map mods like Bedford Falls, New Denver and Drayton.

Thanks so much for your time Hydro! We can’t wait to see what you and your collaborators get up to next!