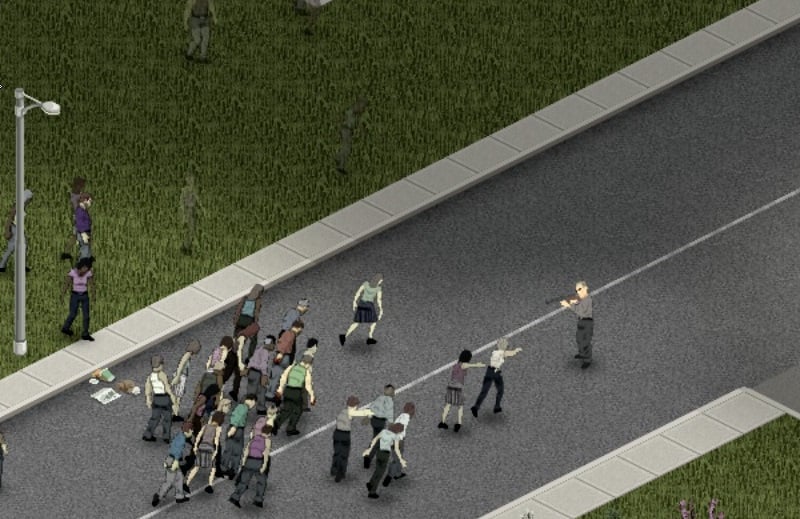 Now Project Zomboid now has the run of the Steam Workshop, we’re talking to the modders filling it to the brim with survival joy. Last time we had a chat with the creator of the wondrous Hydrocraft, but today we’re packing some heat. It’s the turn of ORMtnMan and the fantastic authenticity found within his Real Guns Mod.

Hello ORMtnMan! First off, could you introduce yourself a little? Through detective work can we assume that you’re a Mountain Man and that you’re from Oregon?

Great! So now I have to go back into the witness protection program. Thanks!

Well, I wouldn’t really call myself a ‘Mountain Man’. I just enjoy living near the mountains here in beautiful Oregon. In fact I am a desk-jockey accountant so (aside from possibly my size) I am definitely not a ‘Mountain Man’ in the traditional sense!

Otherwise, I’m a coding layman that somehow managed to cobble enough working code together (with the guidance of some of the other coders in the forums) to make what turned out to be a successful mod. Coding is not my profession, nor was it intended to be a hobby when I started out. But… now it is. A hobby, that is.

I don’t get time to play the game much anymore since I spend most of my time modding, but it’s rewarding all the same. I hope to be done at some point so I can go back to just playing the game!

How would you describe your fabulous Real Guns Mod to the uninitiated?

The Real Guns Mod was started to try to make the firearm system of PZ more in line with real-life mechanics like reloading and chambering. It was also intended to provide a more diverse (and hopefully interesting) selection of guns. If people were to install it today they’d find that It adds the much needed and requested ability to unload guns, and also improves gun distribution over the map and includes randomized amounts in ammo drops.

Does your passion for the mod reflect a passion for firearms and shooting ranges in real life?

Well, I do enjoy doing range shooting, though my passion with guns is more academic than tactile – if you catch my understanding! My interest in the diversity and mechanics of different guns started with the game Jagged Alliance 2 and its community mod project Version 1.13. The sheer amount of guns, ammo and modifications in that was like candy to me! So, I wanted to bring that here…

How did the mod first come about?

I started the mod because of Pravus’ Real Kentucky Firearms mod. It added more guns and ammo (but not new mechanics) so of course I downloaded it! Unfortunately, shortly after that, Pravus went AWOL. That’s when I started getting the itch to make it more than it was, so I started on ORGM.

This is the only game for which I have released any mods. That said, I have done modding for a couple of other games – though nothing as in-depth as this one! The other games I have done modding for are Star Sector (mostly sprite art), Fallout: New Vegas (for which I tried to make a mod similar to ORGM but the system proved much more restrictive) and minor stuff for TES: Skyrim. I always wanted to do a mod for JA2 1.13 too, but I don’t want that to get me distracted from ORGM on Zomboid!

How has the mod developed since its first incarnation?

Initially I was only going to have civilian guns and expand the reload functions to allow for non-chambering guns and other combinations like bolt-action-mag-fed. Then, as time went on and as most modders experience, there was some scope drift! I started adding more and more guns, military-grade included, and my goals for expanding the firearms functions grew ever more ambitious. Hopefully I didn’t bite off more than I can chew!

Who are your collaborators? How does development work?

Well, I do most of the coding work on my own (when I am able to find time) though when I started out I was seeking help from various forum members, I won’t name any names so I don’t leave any out, but they know who they are!

The current iteration of the mod wouldn’t be possible without Jab’s hard work with his ModelLoader utility though – which allows additional weapon models to be used for the game. As for the art, I do all the inventory icons myself, but the models are supplied by others like Wolfeclaw, Fuji, and Jab (I think).

The sounds were found from various (free) online sources, but I also got some help from FLAKT who is a sound genius. Finally, I get many wonderful gun suggestions from the forum contributors. All-in-all it is a lot of work for me, but I would not be where I am without the help of the community.

So how does one go about installing, running and contributing to the mod?

You can either get the mod folder from the forum [link] while it’s now in the Steam Workshop too. The main part of the mod installs like any other mod, you just extract and drop it into the mods folder. However, if your computer cannot handle 3dmodels, you need to install the no3dmodels version, included in the download.

Also, the mod requires Jab’s ModelLoader. It needs to be extracted to the install directory but more detailed instructions can be found in Jab’s forum page.

As for contributing, I have a couple of forum members that have made some expansions or patches, which I put links up to so I can support them on my front page. I don’t really take coding help, but gun models are always welcome! Otherwise, I always take gun suggestions – though please read the current list first before suggesting. Also, I will take any contributed screenshots.

My go-to gun when I am gunning down zombies is any one of the number of pump action shotguns. They are a bit easier to find than their semi-auto cousins, you are not restricted to magazines so you can load one round here and one round there, and the spread ensures you will hit a zombie (or two).

In real life, I love my Ruger GP100, it is a workhorse of a revolver and it is powerful with its .357 caliber. One of my dream guns (thanks to JA2 1.13) is the Colt Delta Elite 10mm, slick-looking 1911 clone in the 10mm caliber. Too expensive for me right now, but maybe someday. In real life I am much more a handgun fan.

Finally, what next for ORMtnMan’s Real Guns mod?

There is so much coming for ORGM, I am just having trouble finding time in recent weeks to get deep into coding! The things I am currently working on are a complete overhaul of the attachments system to allow for more, different kinds of attachments – and changing the reload system altogether to take from a table (an array, not a physical table) instead of a numerical figure. This will allow for magazines loaded with multiple ammo types.

Also, many more guns will be added. Further down the line I have other projects in mind, like ammo breakdown, ammo crafting, zipguns and placeable emplacement guns like heavy machineguns. Likewise belt-fed guns that are able to load from the ground – as long as it’s from a belt on the ground you can have long heavy belts without it weighing you down too much. And that’s just to name a few!

Thanks for your time Mountain Man! Good luck with it!

Modding | 11 April 2017
Project Zomboid | Copyright © The Indie Stone 2023. All Rights Reserved.
Site by Redwire
Stable Build: 41.78.16 | IWBUMS Beta: 41.78.16 | Version history | Wiki
Follow us
Manage Cookie Consent
To provide the best experience, we use technologies like cookies to store and/or access device information. Consenting to these technologies will allow us to process data such as browsing behaviour or unique IDs on this site. Not consenting or withdrawing consent, may adversely affect certain features and functions.
Manage options Manage services Manage vendors Read more about these purposes
View preferences
{title} {title} {title}