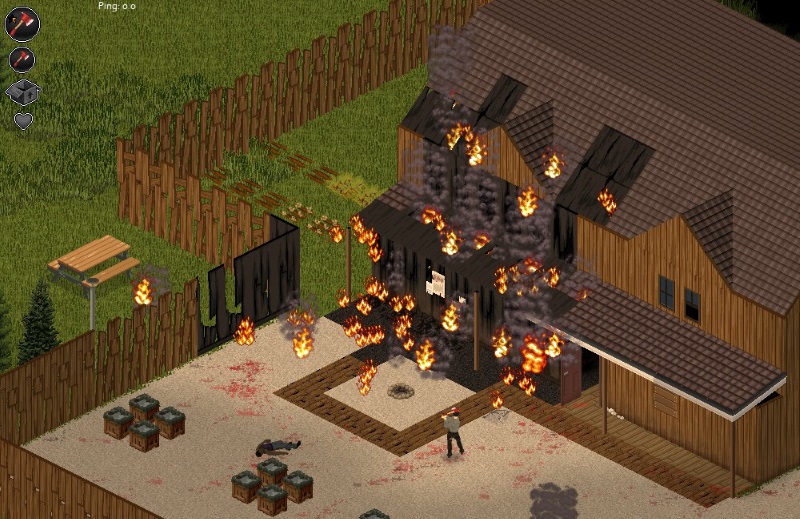 Welcome to Mondoid everyone. Let’s jump on in…

First off, a recap for those just tuning in. Creative Mode is an in-game building mode that will allow PZ players to collaboratively construct their own houses, towns and cities and upload them directly to Steam Workshop. It’s a way of circumventing our toolset, which although highly effective can prove tricky to get to grips with. With Creative Mode everyone can build their school or home town in a fun and engaging way, and then of course populate it with zombies for the whole world to experience. You can find some cool videos of it here and here.

Another prime motivation for its development, meanwhile, has been to aid the development of the suburbs area of the Louisville map. Louisville’s downtown area will be as lovingly handcrafted as Muldraugh and West Point, but to get that highly ambitious sense of scale we want – really making it feel like a true city – we needed a way for Creative to aid in the creation of its many suburban areas. [In-game these will be extremely highly populated zed-areas, and it’ll be a near impossible gauntlet run to travel from West Point spawn points to the Downtown area – and vice-versa.]

For players and developers alike then, to aid in the thankless task of creating thousands upon thousands of houses until brains ooze out of ears, Build 33’s Creative Mode has a House Generation Tool.

Right now the tool generates a completely random house within a specified area – it generates furniture [incomplete at time of video], doors, windows and roofs. At the moment it can only handle a single storey, but the ability to create multiple storeys will be added in future. Likewise, we’ll be adding in functions that’ll allow you to specify the facing of the house, auto-add gardens and yards, and even to draw out entire streets of houses with set properties that define their sizes, heights, loot richness and architectural style.

As Creative develops beyond Build 33, the plan is to be able to take town creation to higher levels for players less interested in creating buildings, letting them concentrate on road networks and zoning for individual areas. They’ll also be able to manually/automatically place unique buildings from Workshop subscriptions alongside these generated houses.

[Please note: this does not mean procedural generated maps during gameplay will ever be a part of Project Zomboid. What it does mean is that tools are being given to massively speed up players who enjoy creating maps, and these maps can then be shared and enjoyed throughout the community. All that said, some of the work has been done now so post 1.0 we will have some fun options to look at.]

Clearly a main focus right now is finishing off 33 and merging our various dev streams into a glorious whole, but Build 34 preparation work is also happening – and in the case of our animator chap Martin it’s been happening for a while!

Also joining us to help out for a little while from the start of next month, meanwhile, is the return of Serge and Gennadii from General Arcade who previously did some ace and complex work prepping Zomboid for Steam integration. Their focus will primarily be on making the PZ MP experience a lot smoother and user-friendly, which will then in turn allow the core team to concentrate on the key remaining features we need in-game before we hit 1.0.

Writer Will, meanwhile, is writing up scripted Army chatter to complement what you hear over the official news channels. You’ll only ever be able to hear this should you loot a powerful enough radio in the early days of the timeline, however. He’s also finishing off a pool of potential survivor characters who are narratively linked to the local area alongside our known cast members Kate, Baldspot and Bobby the Raider. Clearly these characters will come in handy elsewhere too, but in terms of radio they’ll have broadcasts that’ll give information on abandoned safehouses, weapon stashes and, who knows, maybe even some sneaky booby-traps.

Oh, and Mash’s side of her Secret Mission is almost (finally) at its end. It’s something on the art side that’s far better seen than explained though, so we won’t be shouting about it until it’s integrated and ready to go.

RJ’s sound adventures in FMOD continue, and he’s at the point at which all the primary and ambient sound effects are in and working – subject to MP testing. When that’s all done then he’ll be moving on to the integration of his build with that of Turbo, who right now is manfully fixing the bugs found by our internal testers on the radio build. So, hopefully, we’ll have an updated build for a stream or two after next week’s Mondoid goes live.

A quick public service announcement from EnigmaGrey, the oligarch of the official SpiffoSpace servers. He’s now running ‘Proving Grounds’ which is a heavily modded server featuring the majority of mods that are available on the Steam Workshop. It’s a fun server, and helpful to modders who need to make sure their wares play nice together. For further details enquire within on the new SpiffoSpace boards on the forum.

Speaking of mods, we’ll be running our second Mod Spotlight blog this Thursday and it’s a really interesting conversation with ORMtnMan the creator of the Real Guns mod. It’s been great seeing how Steam Workshop has impacted on our most popular community creations – Real Guns mod for instance has gone from having average of 800 regular downloaders to 5700. Since our previous Mod Spotlight on Hydrocraft, meanwhile, downloads have leapt up to 13000 a week! This is all music to our ears!

Finally, check out this AMAZING fan art from Evilmonk77 – his twitter here, and his art page here. There’s also plenty more where it came from! Amazing skills! Click for biggerer!

Today’s featured image from the wondrous Teepee over on Steam, who got on fire and ran around a wooden kitchen. Sucks to be him. The Centralised Block of Italicised text would also like to direct your attention to the PZ Wiki should you feel like editing or amending something, and the PZ Mailing List that can send blogs like this and patch notes direct to your mailbox.