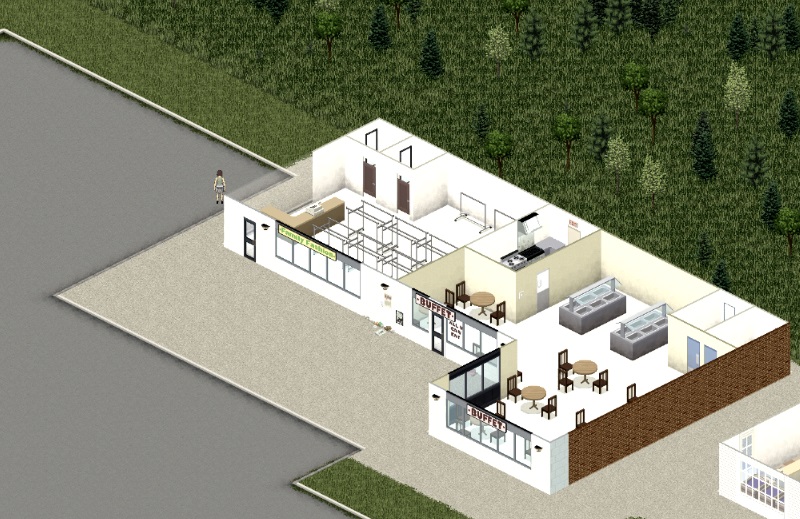 Due to an intricate mix of festivities and flooding the PZ team are still scattered to the four winds on this Boxing Day Bank Holiday. We’ll be in full flow next week, but until then here’s a little tidbit on where we’re at with polishing Creative Mode.

For newcomers, Creative Mode is a collaborative and playable building mode that’s intended both as a tool to flesh out the Louisville suburbs in the official map around the traditionally hard-crafted downtown area, and for a way for the community to team up in huge building projects that’ll see Steam Workshop fill up with real world cities and fantasy lands that are ripe for zombie survival. You can see an explanatory video here.

Over the past few weeks we’ve been doubling down on making it more accessible and easy to use. As such we now have a new system for compositing tiles together into smart Creative Rectangles which act somewhat like Photoshop layers.

These Creative Rects can be used for all manner of things, from carparks, roads, to a layer that adds grime to anything under it, to entire buildings or parks, where the more complex objects are often composites of other simpler layers. They are all non-destructive and can be placed on top of each other and dragged around the map, resized and moved, and will automatically blend the tiles together to avoid seams or visible tile edges.

Our plan is to allow those with no interest in creating buildings themselves to place other people’s content in a more fun and immediate way. Players will drag around roads, place plazas, parks and blocks of houses and then Creative Mode will automatically place Workshop-subscribed buildings in the correct context. After this, of course, you’ll be able to go in and finetune the results.

The implications of this are huge when it comes to making maps, as it’ll allow for buildings and other map elements to be moved about and tweaked long after they are created without destroying anything underneath them, and will allow players to use permissions on Creative collaborative MP to allow/deny editing of specific buildings or map areas. It’s also a really powerful tool to quickly create content for Creative worlds using a combination of Community Workshop items, official PZ items and procedurally generated content.

Although we won’t hit the ease of town creation in a game like Cities: Skylines with the initial release, it’s certainly a game that’s been a real inspiration. It’s opened up our eyes to ways to handle roads and their use of the Workshop, where uploaded buildings will store data pertaining to what types of buildings they are, residential, shops, industry, whether they need carparks, gardens, drives, their value, facing, architectural style, or any other information we can use to be place them in the map intelligently with ease.

Although all this is intended to make map creation faster, more fun and easier, it’s also not hard to imagine other potential applications in the far flung future. We were just shy of getting a video of Creative Mode in action this week (what with the holidays) but hopefully we’ll have a video on the team’s return next week.

This week’s featured image created by the new-fangled rectangle system in Creative Mode. The Block of Italicised Text, would like to direct your attention to the PZ Wiki should you feel like editing or amending something, and the PZ Mailing List that can send blogs like this and patch notes direct to your mailbox. It also hopes you had a nice Christmas if you were celebrating.