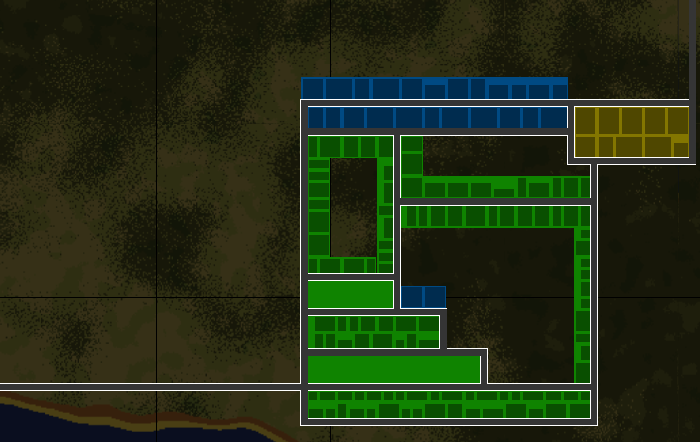 Happy New Year survivors! We’re finally in the midst of 2016 and as you all know we currently have build 33 in public testing before it is unleashed onto the unwitting Steam population. The team are continuing to polish it up and fix all the issues that have been reported by our diligent IWBUMsers. First a bit of an update on Creative!

The Road to Creative

We’ve got a sweet video of the current state of Creative to show off, but first: a brief recap of what we discussed in last week’s mini­-Mondoid as it wasn’t spread too widely what with the holidays.

Creative Mode is a solo and online playable building tool that’s going to be used in the creation of our own vast (and heavily zed­populated) Louisville suburbs, and also in filling up the Steam Workshop with vast building projects conjured up by the community and then populated by hungry zeds.

Right now we’re making it as easy and fun to use as possible, and the latest improvement for this are tiles that composit together into smart Creative rectangles that aren’t a million miles from Photoshop layers.

You’ll be able to drag out roads, parks, residential blocks and more with the tool, and it’ll automatically drop Workshop subscribed content, official PZ map items and/or procedurally created buildings into the relevant area. Plus, if you’d like to dirty­up some clean­looking streets then something like a ‘Grime’ rect will be your friend and blend tiles with their neighbours to boot.

All this also follows through into maintaining a map’s overall structural integrity when there’s back and forth of player creations and corrections above, and of course to lock areas for editing so someone can’t jump into a server and start wrecking someone else’s hard work.

We’ve taken a lot of inspiration from city builder games in our approach for overall town planning, where at a base level those creating towns and cities, henchforth known as mayors, concern themselves primarily with the higher level creation of the town – roads, residential areas, shopping areas, industry and so on. They are then free to get in as much detail as they would like, but are capable of making towns and cities without ever picking up a hammer themselves, or can delegate such work to underling players if they so desire!

Next is a video showing the ‘New World’ option (aka starting from a blank page). In the final version of Creative you will of course be able to extend and modify the existing map, in fact that was one of the reasons for its creation. However there is still some work required in melding the systems used with the existing manually placed map, connecting roads and the like. We’ll keep you posted on that!

One thing to note from the video is the ‘New World’ option now has an infinite randomly generated landscape on which to build on. It’s pretty basic and is put to shame later in this Mondoid by lovingly hand crafted maps, but it makes for city building infinitely more interesting than an infinite featureless forest and can serve as a basis for more detailed landscapes.) It’s still not clear what we’ll do with the surrounds of Muldraugh but we’ll probably use something similar to make sure players don’t hit a sudden black void!

Please note everything in the video is WIP and work still needs to be done.

Of course, the player is free to tear down any lot and build whatever they like in their place, constructing the buildings in it, landscaping it, before potentially uploading it to the Steam Workshop along with details about its type, facing, size, value or any other pertinent information that will then allow it to be built in appropriate places in other people’s cities if they subscribe to it. In time we hope people can quickly create huge and varied worlds unique to them or their server.

Finally, we just wanted to nudge your attention to what Xeonyx is up to with New Denver­ the story behind which is both an emotional and epic one.

Now, a year on from the initial release, Jamie has released a massive expansion again based on the locations in British Columbia ­ to make New Denver feel less superimposed over the PZ map and to fit in the East side of town.

“I decided on extending the map North past the Golf Course, South past the Harris Farmlands between New Denver and Silverton, and East to Three Forks as it’s known; I wanted the journey to and from New Denver to feel more arduous than it had originally been” explained the man himself when we got in touch with him about it.

With vast swathes of wilderness, unique buildings and authentic locations ­ it’s an exciting expansion to what was already an impressive solo feat. With more to come too, it would seem.

“You can expect to see Rosebery added in the near future (North of the Golf Course) and if I’m as crazy as I think I am, Silverton might be around that bend! Never the less, enjoy the map and keep me up to date on any bugs that arise. Peace.”

Our thanks also to the ever­watchful Blindcoder for his swift integration of the expansion into the PZ online map!

This week’s featured image by US. The Block of Italicised Text, would like to direct your attention to the PZ Wiki should you feel like editing or amending something, and the PZ Mailing List that can send blogs like this and patch notes direct to your mailbox. And Happy New Year, and all that jazz.