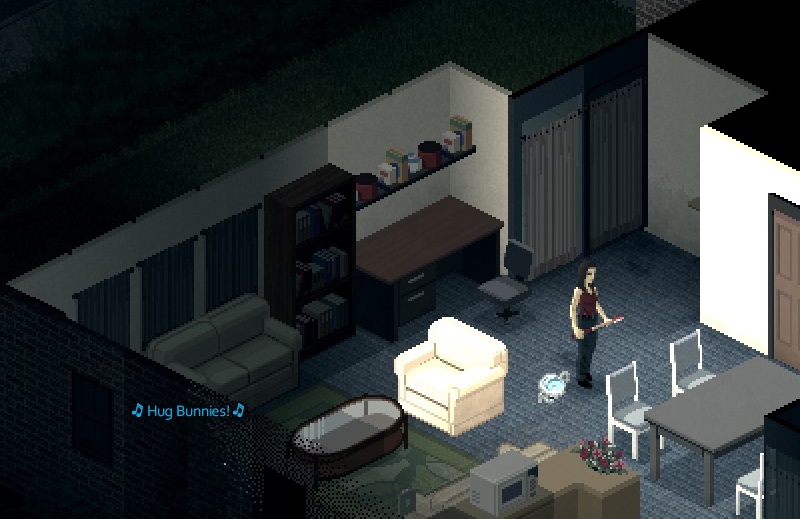 It’s been a really good week hearing your various nuggets of feedback on Build 33, watching streams while we code and constantly thinking that we should probably tone down the noisy dogs. Overall it seems to have gone down well, so on to the next one!

The delightful EasyPickins has released build 33.15 into IWBUMS (link) public testing which provides some post-release polish to address stuff like light-switch related lag in MP, zeds being seen through glass doors and endurance recovery – amidst other issues. The build also features far less off-screen dogs and screamy-death. We’ll push it live to the wider playerbase, perhaps with its follow-up builds, when everything is nice and stable.

Given as our ‘playable co-op building project and development tool’ Creative Mode was bumped from the Build 33 feature roster due to complications with Mash’s Secret Mission it’s far, far nearer to completion than other elements that’ll be part of the next couple of main builds. As such it will arrive sooner, either in the IWBUMS testing channel or in its own test branch of its own, and when ready may well be given a Build number all of it’s own. [For more thoughts on Build numbers this is worth a read].

Shops like groceries, hardware stores, book shops and the rest can be contstructed from templates with a random layout. Make a small one and it’ll be a small corner shop, a big one and it’ll be a huge grocery store that’ll be automatically populated with shelves, checkout, store rooms and everything else it needs – it’ll even cover a parking area and connection to nearby roads. The commercial zoning tool will then automatically populate commercial areas with the various shops.

[Although it must be stressed that players can choose not to have zones auto-populate and can of course create an entire town tile by tile if that is their desire!]

Amidst other general features a main thrust of Build 33 was in ambiance: increasing your feeling of actually being within an ongoing zombie apocalypse with the improved sound, the addition of a radio/TV lore timeline and the building/body randomisation.

With the same ‘build theme’ intention RJ and Turbo are now looking to work on ways to deepen the game’s treatment of the physical and psychological impact of long-term survival. This, in turn, should provide for added duress for players who regularly survive for long periods.

As such, RJ is currently researching a more realistic nutrition system and ways to integrate it into game mechanics – encouraging a balanced diet, and thereby encouraging more varied use of the game’s various means of obtaining food. Likewise, the system will be tied to your player’s stamina, weight, combat effectiveness and outlook.

Turbo meanwhile, amongst other things, will looking at the need to keep yourself happy against the odds: refining the current boredom moodle to have a tighter impact on the way the game plays. This will include a fair amount of ongoing work like lootable VHS tapes and audio cassettes containing radio/TV style content, and (as mentioned before) a better radio UI to make it easier to find ‘secret’ late-game survivor radio broadcasts and potentially the return of ‘insanity’ effects if your survivor were to go entirely cuckoo.

Elsewhere, alongside our long-term feature work, we’re also updating WordZed to make it suitable for radio broadcast modding and easy communuity localization and integration and planning some nice UI tweaks to boot.  All good stuff, with more to discuss in a later Mondoid besides.

For the Bug Reporters

A bit of housekeeping to finish with, but this is just to flag that we’ll be updating out forums and bugtracker soonish – thanks to some sterling work from Kirrus and some amazing elbow grease from Connall. More info through here if you’re one of our fevered bug-hunters and want to know the latest.

This week’s featured image by DrChiruchi over on Steam. The Block of Italicised Text would like to direct your attention to the PZ Wiki should you feel like editing or amending something, and the PZ Mailing List that can send blogs like this and patch notes direct to your mailbox. Thanking you all!