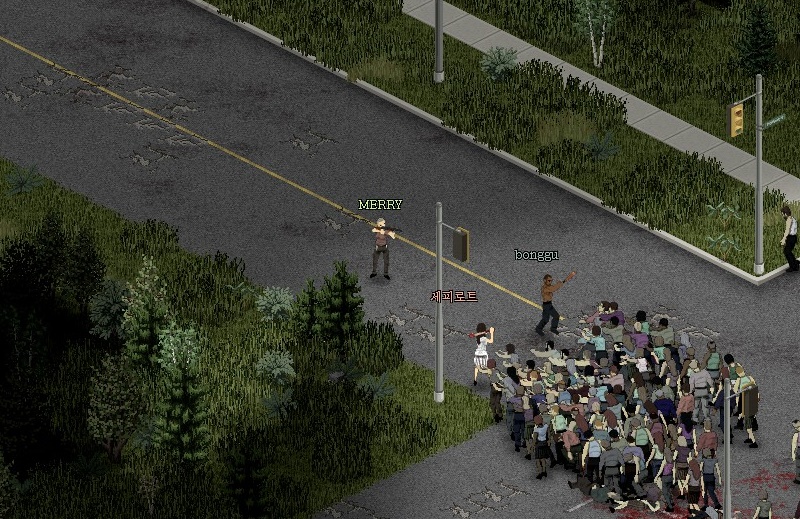 A Mondoid update from deep inside the guts of the next build as we all bash away on our various different coalfaces. So let’s get going…

LIGHTING FIX-UP
As those who’ve ventured to the Mall will attest to, occasionally the current lighting system takes too long to catch up with the player’s line of sight. What with the future map expansion into the city of Louisville, and its range of larger buildings, this is clearly something we need to get on top of.

EasyPickins has been working on improving and reintegrating a new line-of-sight and lighting system underneath the hood of the PZ-mobile – in the next build this will now be written in C++ and will be a lot faster. He’s also changed the way room lighting is handled by the game to speed things up, by having internal spaces more uniformly lit with the same light bleeding from its edges. It should look much the same as it used to, but run a lot faster.

Another positive impact from this will be that lighting updates are no longer interrupted whenever a ‘map chunk’ is loaded. We’re hoping that this will help players with slower computers who’ve been forced to turn lighting quality down by ‘Help, I’m running into black fog!’ issues. This is all now in internal testing and we’ll let you know how it goes.

CO-OP
We’ve also just started a closed test of the new online co-op system worked on by General Arcade – that allows personal server creation with far less of a headache. There are still a few issues to resolve with the magic hocus pocus uPNP system to make it play nice and reconfigure the right router if more than one is on the network – or indeed a PC on that network that’s stubbornly deciding it wants to pretend to be one.

It’s already really really exciting to see how players will be able to simply launch multiplayer games straight out of the box as it were though. It’s too early to say when it will first reach IWBUMs public testing but, as with everything going on at the moment, when it’s done we’ll likely organize either a .5 build or a Full Build around it. It all depends on what else is good to go at that stage.

FOOD SYSTEM
The rudiments of RJ’s food, cooking and physiology revamp are still in playable and experimental form (found here!) for the community to take through its paces and report back their stats and findings. RJ has now hit his fifth build, and now features freezer compartments on in-game fridges.

We’re hoping that the introduction of frozen food will add to the usefulness of those noisy generators in the late-game, as well as being a decent way of storing perishables. Alongside this there’s nutition balance, new recipes and (unrelated and minor, but still cool) the ability to clear up blood stains with a mop. If you want to join in our playable survival survey then please dive in.

CREATIVE AND WHATNOT
Creative Mode is our upcoming playable map building and MP project mode, and it’s in the works both to fuel a community explosion in content and as a means to an end when building the suburbs of our own Louisville map.
What we haven’t really mentioned, however, are the side-benefits that coding this system has brought to the game. Namely, that it lets us fix a few long standing issues and limitations with the tile engine. And so…

Cut aways
This one is particularly exciting to Mash, who made all those buildings, the Mall and all those other exciting survival locations – only to see them sliced and diced 99% of the time because the cutaway segments are wholesale across the entire screen.

When you run in front of buildings, say in West Point, buildings cut off and you generally never really see more than one storey high. In a perfect world only the building you’re stood inside and that obstruct your view should slice away, leaving the surrounding town more aesthetically pleasing. This, then is also a large part of the Creative mission, and becomes a lot more important when you consider the following…

Improval of map height limits
The primary reason for the current (very limiting) 8-storey height map is that it’s pretty hefty in terms of memory: we have to be reserved with the maximum height as ‘one size fits all’. If a tower block has to be 8 high then so does the rest of the entire game, including all the bits above the fields and forests. All that space ‘reserved’ and swallowing up bits of memory and processing time.
This will change however, since changes made for Creative will ultimately allow for each chunk of the map to define its own extents. Therefore a tower block chunk will have its own upper limit without cruelly condemning the middle of a forest to be the same height. While it’s not yet clear how far this could or should be pushed, it’s safe to say we’d be able to consider more than 8 height buildings. This, again, is vital to the foundations of our Louisville city map.
[IMPORTANT NOTE: Discussions need to be had with EasyP about his newfangled C++ light system and how that would be impacted by this system, so it’s not certain this will make it into the first release.]

This week’s featured image by Merino. The Centralized Block of Italicised Text would like to point earnestly in the general direction of the PZ Wiki  should you feel like editing or amending something, and the PZ Mailing List that can send blogs like this and patch notes direct to your mailbox. We also live on Twitter here! The CBOIT has also been very much enjoying submissions to the PZ Community General Creativity thread recently, and wanted to nudge your attention there too. Laters!