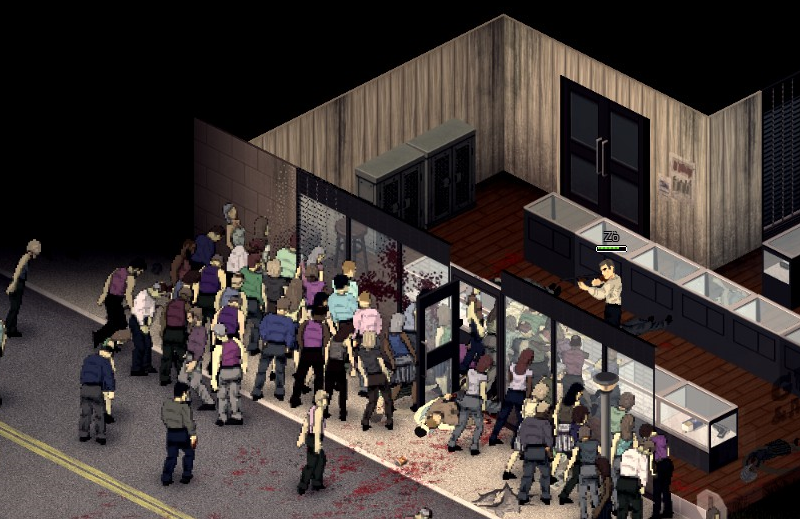 Today we’ve got an update from Martin, our lovely animator friend. Something the animation update will bring is some improvements on in-game firepower, so he thought he’d share…

“One of the areas currently lacking breadth in PZ are firearms,” he explains. “The amount of guns in the game has been discussed in many threads on the forums in the past, but it’s always been the intention to have a wider range of boomsticks. It is America after all!”

“What calibres, and how many, is still under discussion. We’re by no means talking about as exhaustive a list of some of the (very cool) mods like ORMtnMan’s one, but we will be adding a few more guns and ammo types that’lll give the player some more options and problems to think about.”

“Obviously when I came to model the guns I was basing them around particular calibres/types that would generally be available to Kentuckians during the early-90s era that PZ is set in. They’ve been modelled with a degree of generalisation, in part to avoid licensing issues, but also to let them represent several guns of similar types.”

“In the above video you’ll also see that there are models with proper bayonets and improvised versions. This was something I was keen to include as using guns with bayonets is as old as firearms themselves – but you’ll also notice not all guns have proper bayonets or indeed can be modified to use improvised versions. The same can be said about modifying with sights. Again, this will give the player more options and problems to think about.”

“As part of some new melee attacks I’ve also included a couple of rifle butts and pistol whips for when things get desperate – like when you’ve run out of ammo and the zeds get too close for comfort!”

“While we’re talking offense it’s also worth mention that, along with new clothes, I’ve also modelled and textured some new items that can be used as melee weapons. Some of these are representing items already in game that currently don’t have a model (ie the crowbar!) but quite a lot of them are new. Suffice to say there’s a lot of stuff to implement and balance. Creating the assets is only part of the process, so not all of it may make it in the first animation update but will be rolled out as and when they get put in game. Should all be good though!”

“There’s plenty more I’m up to, and have been up to, but we’ll leave that to another Mondoid! I don’t tend to reply on the forums or reddit but I do lurk and take notes, so keep the suggestions for animations or items coming. It all helps, and a lot of it is going in. Thanks!”

This week’s featured image by Zo off of Steam. The Centralized Block of Italicised Text would like to direct your attention to the PZ Wiki should you feel like editing or amending something, and the PZ Mailing List that can send blogs like this and patch notes direct to your mailbox. We also live on Twitter right here! Okay thanks bye!