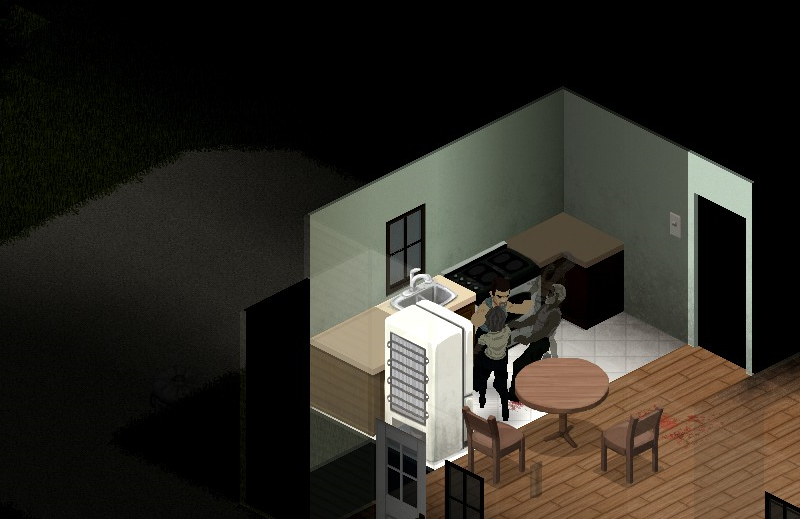 Good Mondoid everyone! Here we go…

Build 34 came out last Monday, and most people seem to be digging it. So: yay! We’ve currently got a version three iterations further down the line in IWBUMS public testing which should eliminate the issues flagged up by the wider release, fixed some issues with fatigue and generally did some good old EasyPickins fixin’.

As soon as it’s clear we’re all done and good we’ll be releasing the GOG version, we needed to have everything 100% before we call 34 ‘done’ and fully move onto the next version y’see. That time isn’t far off though. And speaking of the next version…

Right now RJ is polishing metalwork, and adding more depth and mod-abilty to how you build things in Project Zomboid.  The primary change in this is the ability to have multi-stage objects.

The best way to describe this is to use a simple example: the wall. Before, building a wall was simple. You’d right click select it, the build – but you couldn’t ever upgrade it. As of the next build, however, that time will be over. Once you hit the correct level you’ll be able to improve on it, which should see the end of people building countless wooden floor tiles to get to level 6/7 before you decide to start building walls.

Here’s a WIP image, with WIP UI stuff and… did we mention this was WIP?

To build a wall, you’ll first need to build a frame – and then onto this you’ll then be able to right click it and build the wall using it. So yes, construction will take a little more time – but also there’ll be more precious XP points on offer.

This is also where we introduce cross-skill abilities. Using the new metalwork skills you’ll be able to have similar metal frames that can be used with wood to create more reinforced walls. Meanwhile, another more zed-resistant wall will be a wooden-frame with light metal plates attached – which will have more HP then a standard wooden wall, but will make a lot more noise when zombies are slamming against it.

There’s plenty more to come with all this that we’ll discuss at a later date – but another example would be putting two poles in the ground and choosing what sort of construction material to use to link them. Wooden fencing, metal wire… all that cool stuff.

Also in the works are an unexpected book-end for Mash’s ‘2x sprites’ secret mission that we’ll wait on showing off until we have some vids to show off its cool factor, Nutrition polish and of course the animation system that, as this Mondoid is being written, Lemmy, Binky and Martin the Animator are having a big exciting meeting about. More on all the above, in a less ‘national holiday in France’ abbreviated format, next week!

This week’s featured image by Kaguya-Hime. The Centralized Block of Italicised Text would like to direct your attention to the PZ Wiki should you feel like editing or amending something, and the PZ Mailing List that can send blogs like this and patch notes direct to your mailbox. We also live on Twitter right here! Okay thanks bye!