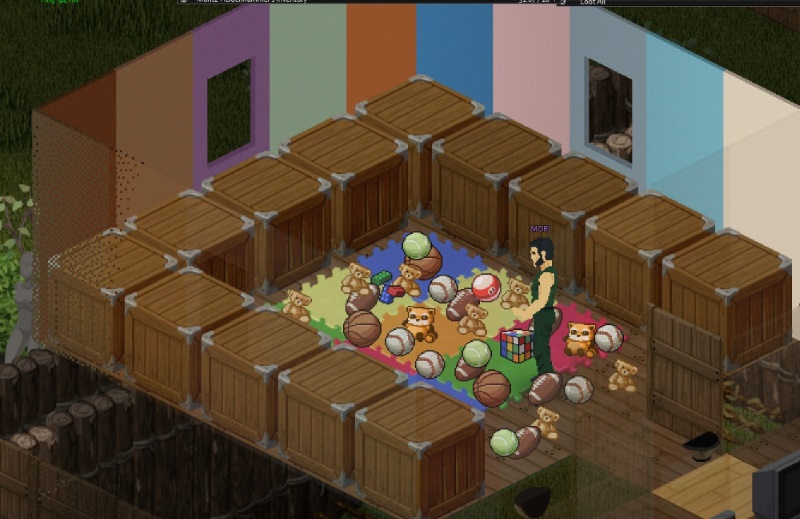 We have just released a new update to our public IWBUMS beta channel (details of how to access found here) with some cool new stuff. The build is 35.21, and the primary items it contains run as follows:

Rosewood now has a player spawn option, meaning that you can check out the prison, courthouse and the like without a hike. The military residential area of March Point meanwhile, placed between Muld and Rosewood, can currently only be reached on foot. [This might change depending on the feedback we get from this test build.]

As a part of this update there are various fixes to the map in the previous version, more applicable loot to be found in new buildings like the fire station, expanded foraging zones and also an updated ‘zombie spawn’ map that looks a little like this. Bottom right you’ll see the existing Muld zombie spawn, then to the lift is March Ridge and up at the top is Rosewood. The brighter the white, the heavier the zed presence.

We especially need feedback on difficulty in terms of the heightened zombie numbers for these areas, and of course any and all map bugs to be reported in the PZ bug tracker. We are aware that Rosewood has been spelt ‘Roosewood’ in the spawn selection screen. This will be addressed in an upcoming build, and has resulted in a Frenchman apologising profusely through the medium of Skype emoticon.

This feature allows you to talk to your co-op friends and survivors you meet on MP servers. It’s not a general overall PZ chat channel, but instead allows survivors to communicate when they’re in ‘audible’ distance from each other on the map itself. We’re hoping that it will add some great new dynamics to the game when played with friends, and enemies.

To enable this venture into the options menu, then choose whether you want the system to broadcast when it automatically hears your dulcet tones – or through the press of a button (default: alt). Our thanks to General Arcade for all their amazing work on this.

We’d like feedback on levels, the default distance from which players hear each other (though server admins have control over this) and general usability/bugs. In future we will look into the VOIP system allowing you to broadcast your voice through Turbo’s in-game radios, and maybe record as well.

Something else we’d like to do is have lower speech volumes when players are on different floors in the same building and, although it’s quite a way down an already hefty priority list, one day have a more sophisticated sound propagation model to deal with indoor-to-outdoor sound levels and large obstacles/walls that block hearing. For now though, it’ll be as-is with finetuning – although General Arcade are currently working on giving Admins the ability to talk between themselves, which will be added into a future 35 Build.

Community Translations of all 4500 lines of current radio and TV content are now in-game for Russian, Turkish, German, Spanish, French and Polish (which we forgot to mention last week – sorry Geras!).

As of the latest beta build MP Factions are now a part of the game. Press Escape to access the user panel, add a tag of up to four letters, choose a colour and all of a sudden you’ll be a part of your very own survivor gang –  with it being your decision as to whether you reveal your allegiance to the players you meet, or not.

This system also disables melee PvP between group members, which you can also turn off should you need to turn on your friends or the recently infected. Overall control over how Factions work, meanwhile, is governed by the Admins – who can govern how many players can form a group, and how many days must pass before they are given the option.

Next up RJ will turn his attention to clearing the backlog of 35-specific bugs that have built-up in the Bug Tracker. In the background, of course, is still the much-anticipated (much delayed) work on our new animations/combat/etc  system that remains ongoing. We’re still filling in something of a crevasse the opened up when on the final approach, but we will get there.

As such, once RJ has chewed through bugs in the current IWBUMS build, we’ll make a judgement call on whether to release it to the public. It’s already got a fair wedge of new stuff (new map, VOIP, metalwork, finalized food system, jumbo trees, multi-stage building, sleeping revamp, item disassembly, composting, tools to make life as an MP Admin easier, lots of UI and Inventory tweaks and tons of community requested changes etc). The more we add at this point, the higher the bug mountain from the wider public player-base. So we’ll be seeing how it goes over the coming week.

This week’s crazy landscaping from the formidable MesCaLin, who’s also responsible for mannequin chess and this overall Prisoner-esque abode. The Centralized Block of Italicised Text would like to direct your attention to the PZ Wiki should you feel like editing or amending something, and the PZ Mailing List that can send blogs like this and patch notes direct to your mailbox. We also live on Twitter right here! Our Discord is now open for chat and hijinks too. A general overview of the content of PZ builds past, in testing and upcoming can now be found here.