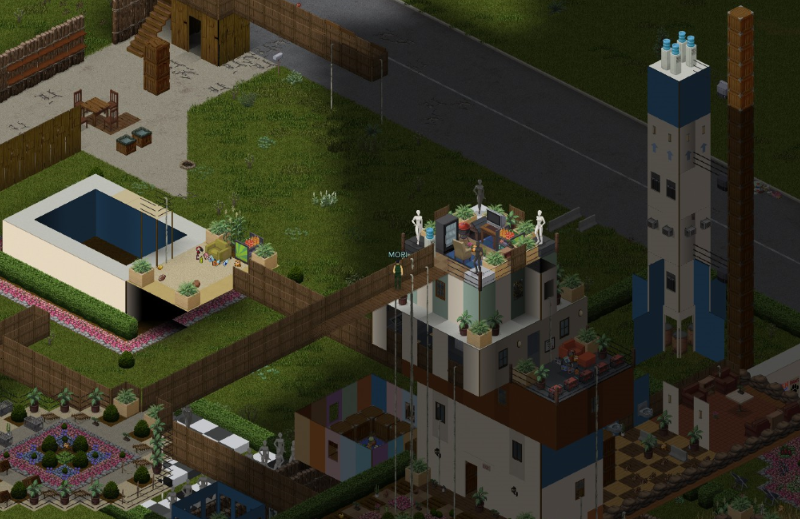 Okay, so! Where we’re at is: we’ve filled in the yawning chasm that opened up before us in terms of getting the new game logic state machine system. So all the existing internal game messages to itself like (to choose three of a bazillion) ‘the zombie is attacking!’, ‘survivor health damaged!’ and ‘oh no, a bite!’ now work comfortably within the new animations. So, hurrah for that.

The vast majority of combat code is ported over, and right now we’re rewriting the lua bullet-reloading system that was so expertly contributed by Stormy in the early days. This relied heavily on the old animation system, and for purposes of finally getting anims out of the door we will probably concentrate on the standard reloading system for now, and leave the Advanced Reloading option for a later date.

After that we get it all running together, and then we spot any forgotten mechanics/states from PZ’s vast repertoire that appear during the gameplay. Then we fix them up (could be a big job, could be a small job) and a test version will finally (finally!) emerge. Finally.

We’re currently polishing the current IWBUMS public beta of Build 35 with the thinking that it’s got so much stuff in it at this point that we need to release it soon, or the mountain of bugs found by public testers in the full gamut of new/updated features will be too much for poor old RJ to handle.

To this end, then, a few of us have been running around the new areas of Rosewood and March Ridge and building a list of things that need quick tidying up in terms of game systems – while RJ has been ploughing through the bug tracker and fixing stuff that the community has been reporting. Mash, too, is still in and around the new areas updating the new map’s farmland areas.

We’ve just released IWBUMS public beta build 35.22 that (among other things) lets you see how many crafting recipes you still have to discover in each particular skill, reassigns cigarette and magazine loot distribution, fixes up some Factions issues, remedies some translation and UI woes and generally fix up bugs associated with new game systems.

Due for public release this week, to mappers and creators of general PZ paraphernalia, is CartoZed – a tool created by TurboTuTone to help the Zomboid team and our modders whenever we need a non-isometric ‘traditional’ map of what’s currently in-game to assign zed spawn maps, check locations and (in a build that lies beyond 35) maybe create a range of lootable in-game maps.

CartoZed can be used on any map (so the likes of Dreadwood, New Denver and Bedford Falls can also be put through it) and it can draw up top-down maps searching for whatever you fancy whether it’s the traditional road/rail map seen below, or a more diverse map that (for example) flags different items and locations on the map.

This map produced with different CartoZed settings, meanwhile, draws Muld in terms of the electrical devices: radios in blue, TVs in green and furnaces in red.

Seriously, have you seen the stuff MesCaLiN has been building in PZ? We’ve used images of his creations in Mondoid before, but please check out his full range of Spiffo playrooms, chess boards, space shuttles, ornamental gardens, art galleries and jewellery stashes. Amazing stuff.

A quick call-out to groups of friends playing our IWBUMS build. We need feedback on ease of use, voice quality, settings and the default ‘hearing distance’ between co-op players on the map. While you’re in there, let us know what you think of the current zed count in Rosewood, Rosewood Prison and March Ridge too. Cheers all!

This week’s featured image from MesCaLiN again, obv. The Centralized Block of Italicised Text would like to direct your attention to the PZ Wiki should you feel like editing or amending something, and the PZ Mailing List that can send blogs like this and patch notes direct to your mailbox. We also live on Twitter right here! Our Discord is now open for chat and hijinks too. A general overview of the content of PZ builds past, in testing and upcoming can now be found here.