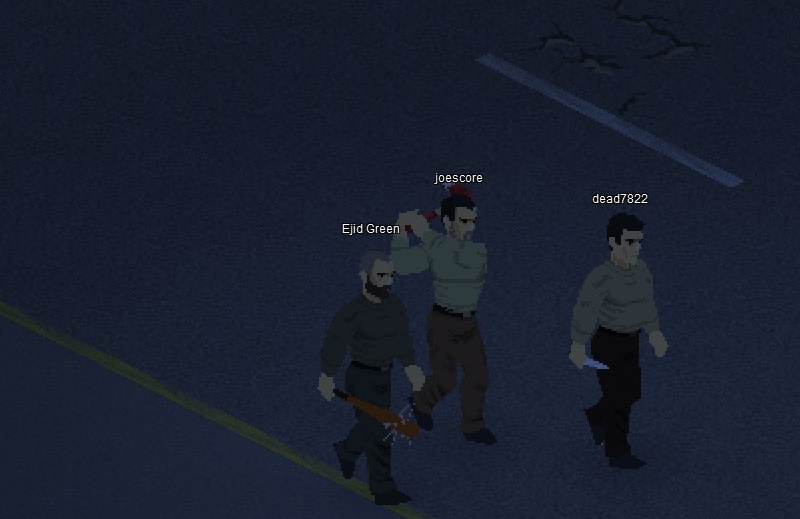 Hello! It’s Monday. It’s Project Zomboid. So it must be… Mondoiddddd.

This year we intend to keep the build release process fairly free-flowing, as opposed to leaving improvements on the brew in IWBUMS public beta for longer than is necessary. With this in mind, then, last Thursday we publicly released a fast-fire Build 36 to follow on from Build 35’s release just before Christmas. This has now found a home on survivor hard drives everywhere.

The full changelist can be found here but the abbreviated highlights run as follows:

After their amazing work integrating VOIP with the PZ mainframe our friends at General Arcade have been digging deep into our codebase to find out ways they can help with the integration of various features destined for roll-out in the lead-up to PZ going 1.0. Namely, but not exclusively, vehicles.

The deep-dive is now complete, and GA are now gearing up to work on what they’ve discovered: initially map streaming improvements, net code optimization and an acceleration of the rate at which PZ (online or off) processes game objects.

It won’t be an overnight job, to say the least, but they’re improvements we can feed into the game build-by-build (improving the whole game’s performance as they go) to help us ease EasyPickins’ ace work on cars out of the dev garage and onto the road.

It should be underlined that the new animations, combat, outfits, weaponry and all that pizazz hasn’t fallen down a deep, dark well. We’re still going with it, and coming back to the coalface fresh from the Xmas and New Year break is proving fruitful. As we have done before, we apologise for the delay – but hope to have fresh news for you in the Mondoids to come.

The first thing on the menu for the first IWBUMS beta release for Build 37 is a UI feature to improve the life of chef survivors – an operational UI dial that will initially be used for alarm timers on ovens, and for microwave settings.

Small thing, yes, but also one that Turbo can use when we update the radio and walkie-talkie system to have more analogue station-tracking (handy for scanning airwaves in MP, and for plans for SP survivor radio) and also for setting some timed explosive devices.

Blindcoder, custodian of the ‘Recently Updated With Build 35’ PZ map and author of several mods integrated in to the PZ mainframe, has released a cool new mod that deals with the tricksy and much debated happenstance of Sky Forts.

The ‘Obey Gravity’ mod sees player-built structures fall down when supports are removed, and stops players being able to build floors more than three tiles away from supporting walls. Both ourselves and Ben would love to know what the wider PZ survivor populace thinks of his approach to sensible-shoes engineering.

Featured image from НЕКОКУН. The Centralized Block of Italicised Text would like to direct your attention to the PZ Wiki should you feel like editing or amending something, and the PZ Mailing List that can send blogs like this and patch notes direct to your mailbox. We also live on Twitter right here! Our Discord is now open for chat and hijinks too. A general overview of the content of PZ builds past, in testing and upcoming can now be found here. And oh my GOODNESS GRACIOUS some graphical bugs are rude :O

You Survived 2016, You Have Killed 0 Zombies