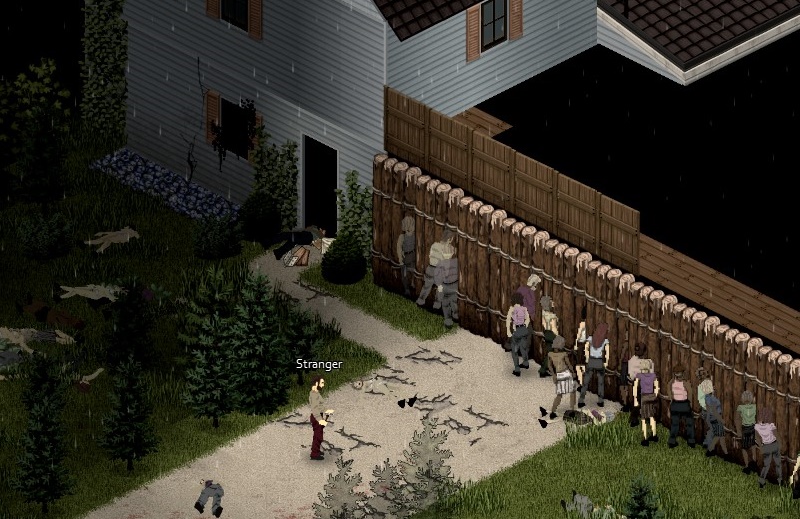 Hello! The zombie paperboy just threw the following chewed and bloodied missive onto your lawn. Read on, survivor!

Since the release of Build 36 ten days ago, RJ continues to tinker with ovens, microwaves, timers and analogue dials – now focusing on the sensibilities of microwaving metal (bad idea), cooking temperatures and the way cooked/microwaved food impacts on character happiness and contentment.

He’s also, with the help of our admin team and various different servers, collating info on the various long-term server MP bugs that have popped up since Build 36 and looking for fixes.

The continuing quest to get the animations out the door continues. Next thing on the agenda is getting some completely solid uninterrupted gameplay with all the new anims that we can show you, and then release for you to play. We’re hoping to have something that’s solidly playable for a gameplay video soon, but no promises as to when – as we’ve been bitten by that so many times before.

When the build is ready it will be going into its own testing branch. It’s such a massive change that the inevitable initial teething troubles would disrupt the speedier public build schedule we intend to maintain this year.

Overall, you see, the wind is blowing back towards getting SP fully coordinated, up, running and out for testing. The recent pain in the bum behind much of the delay has been MP anims compatibility: since the animation drives a lot more of the game systems, making sure that everything is synced and smooth is tricky to say the least. Given the time it’s taken, however, it increasingly feels like we should get a settled build out there that’ll allow for feedback, and something solid to tie back into the tricksy MP.

In other anim related news we’re also talking to General Arcade to implement a new model loading system that will allow for modders to import practically any format of 3D model they want. This should make the ability to mod in weapons, animations and clothing much easier going forward.

This will be alongside the map downloading, streaming, chunk caching and game-object-processing work our lovely Russian friends will be doing to help us on our way to integrating EasyPickin’s fab work on the road to getting vehicles out of the garage online and off, as mentioned last week.

Turbo is wrapping up work on his development and modding tool ItemZed that we discussed just before Christmas.  This will give the community the ability to play around with item attributes, recipe contents, individual values, loot locations and spawn rates – and all kinds of similar cool stuff.

He needs to finalise the best way to have the ‘read only’ content from the base game present in the tool, after which he plans to release it on the forum. After this he will giving CartoZed a quick tune-up to make it compatible with user maps, before moving back to the main game and finishing his existing work on various in-game devices (VHS, radios, CD players, better environmental noise for TVs etc)  for an upcoming build.

Just wanted to point out that a cool website called SurviveThis has cropped up on our radar via their PZ  blog English-to-Deutsche translations, and looksees at cool stuff like Blindcoder’s PZ map. Google Translate suggests its a really good place to have bookmarked for your survival gaming and horror needs.

Featured image from Stranger. The Centralized Block of Italicised Text would like to direct your attention to the PZ Wiki should you feel like editing or amending something, and the PZ Mailing List that can send blogs like this and patch notes direct to your mailbox. We also live on Twitter right here! Our Discord is now open for chat and hijinks too. A general overview of the content of PZ builds past, in testing and upcoming can be found here. And, in keeping with the CBOIT’s increasingly lurid fascination with suspect shenanigans… [rude link here]