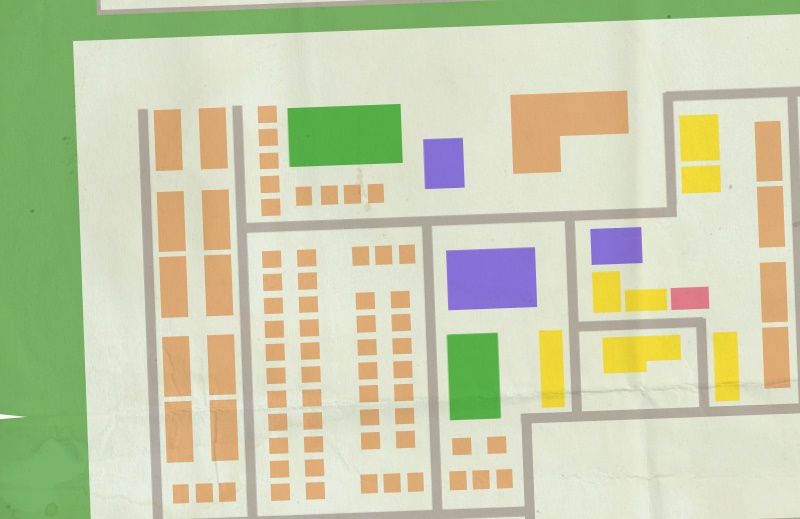 Howdy survivor. Hope your apocalyptic nightmare scenario is going well. Here’s some news from the land of zeds…

For many PZ players the alt-tab to Blindcoder’s map has become something of a ritual, but for a long time we’ve needed a way for players to get their bearings in-game. Using the power of Turbo’s CartoZed tool we now have the power to create top-down maps, which means that we can now also feed them to our resident artist Mash to create lootable in-game items like this. [Still somewhat work in progress – town slogan to change!]

These maps won’t track your position, but you will be able to get you bearings and make markings on them. After all, what’s a map if you can’t mark safehouses, the homes you’ve looted and whatever other vital survival locations on it? Using this initial March Ridge template map RJ has been implementing mouse zoom, the ability to mark notes and also a ‘symbol stamping’ system that will let you annotate the maps that you find with skulls, house images, crosses etc. You can even choose your own text and icon colours. Please note that the following video is a work-in-progress!

Importantly, too, the work has been done to make sure that these are transferable between co-op and MP players. This is a fully moddable system too, and the .png files could be expanded to faction leaflets, community maps and various other world-building materials.

Right now the system is in place, but it’ll take a little while for maps of each major town area to be produced – West Point and Muldraugh are sizeably bigger than the March Ridge test case after all. At first, meanwhile, we will only be concentrating on urban areas and avoiding any areas that are still in-flux or could potentially change in the main game.

A quick shout out to Z3759xy on our forums who has had to step away from some, quite frankly, incredible PZ map-making projects due to the amount of spare time he has on his hands – and we dearly hope that someone else picks up his .tbx baton, or performs a team-up operation. Some really great stuff in here!

Featured image from Mashie. The Centralized Block of Italicised Text would like to direct your attention to the PZ Wiki should you feel like editing or amending something, and the PZ Mailing List that can send blogs like this and patch notes direct to your mailbox. We also live on Twitter right here! Our Discord is now open for chat and hijinks too. A general overview of the content of PZ builds past, in testing and upcoming can be found here. Today’s image of desolation and destruction from .exe.