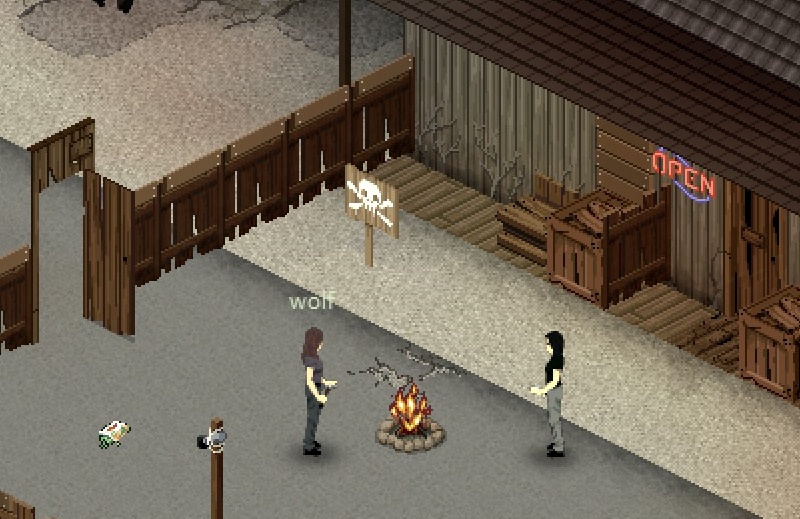 We released a bugfix update last week to Build 37’s Muld/Rosewood etc lootable maps, and also their marking and annotation system. There’s another ‘fix build’ on the brew, and any and all feedback is welcome. Specifically, the new ‘oven dial’ UI has been built for multiple uses across the game’s many devices – so feedback on its general usability would be greatly appreciated.

Next up, although we’ll give full details once it’s in the can, RJ is going to work on expanding this system so that it benefits MP safehouses with annotated maps that can be put on public display, and a plan we have about pre-annotated maps discovered on zed bodies that’ll be useful/fun in SP and co-op.

Details on how to access the IWBUMS beta – here. [We’ve removed password from the beta, as everyone’s quite used to unstable branches these days.]

One element that’s been a part of the perils of getting the animation build playable and into testing, is that the closer you get – the more issues in general gameplay become clear, and the more evident it is that they need fixing. The ‘not fun’ factor looms large. Primarily, in this instance, was cludgy indoor movement with a side salad of ‘rotate on-the-spot’ zeds and survivors looking pretty crap.

As such, while pulling everything together, there’s been a side-thread of work going on with Martin the Animator to see how we can improve things. It’s all to do with ‘root motion’ – in the new PZ anims the movement of characters has always been directly taken from the animation data itself, instead of being pumped into the character in the game logic.

Thing is, there was one important part of the system that it became increasingly clear that we needed: we only had support for movement in a straight line, and no support for characters to rotate within animations and for this rotation to translate into the rotation of characters in-game.

Up until now we still had to rotate characters/zeds in the game code and completely divorced from the animation. The most obvious consequence of this was that despite characters making realistic steps when walking, sneaking and so on (and in videos as you’ve seen, if the character is rotated while sneaking it works pretty well) rotating on the spot would still produce ‘slidey on the spot rotating’. This works okay in the current game, but looks a bit silly when the animations around it are much more realistic.

Without going into lots of technical details this was a much more complicated and confusing problem to solve than the positional root motion system [Mondoid writer aside, direct to camera: seriously there’s been all this chat about Quarteronions that’s pretty much incomprehensible to me], but after a meet-up with Martin last week we finally worked out the best way of how to approach it.

Now (well, almost now, there’s still one more bug to sort out that would have resulted in an in-game video today) we have support for rotations, it allows us to improve in various areas, as well as fix the issues mentioned above.

a) Rotating on the spot. When the player rotates on the spot, we’ll be able to have them actually make steps to turn themselves without the aforementioned sliding in a circle with feet stationary.

b) A big issue with movement that we found it difficult to solve was that with deferred movement it’s important that the character’s movement mirrors the animation, and that characters don’t rotate super-fast to change direction. In-game this lead to a kind of inertia effect, with characters speeding up from stationary and having a finite turning speed, meant that indoor navigation got a lot more difficult.

Now, however, we’ll be able to have the character turn and step in any direction as part of their ‘starting to walk/run’ animation. Zeds and survivors, for example, can twist their torso while immediately stepping to the right, left, or making a turn through 180 degrees.

This should make movement a lot more responsive and immediate, and though this is clearly nothing to do with our game specifically this should give you an idea of the kind of rotational character locomotion we’re talking about.

c) There are a fair few animations, particularly in the ‘wall hugging’ advanced cover traversal system, that require this rotational movement to be able to function. This is a system that isn’t currently planned to be implemented in the anims test build release, but was a major technical barrier to it – and it feels good to have a system in-place that bypasses it.

d) In future a lot of stuff like zombie walks could now have rotational movement encoded into the animations, to make their movement much more realistic and non-linear. The same could apply to an injured character’s movement, drunken stumbles and other things. It opens up a lot of doors.

Turbo has just released the full version of ItemZed. This is a development and modding tool that’s used to edit the contents of script modules (foodstuff items, weapons, recipes etc) and the distribution table that dictates where different in-game items can be found and looted on the map.

On top of the tool’s previous test release, there’s now options for the batch refactoring of large numbers of items and in-game objects and lua integration that allows the entire data set to be programmatically modified, and output to any sort of format – meaning that changes and new items can quickly and easily become part of user mods, and a part of the main game.

Here’s a vid Turbo’s made to explain it all a bit, turn on English subtitles for written descriptions.

Featured image from Arsenic Legacy. The Centralized Block of Italicised Text would like to direct your attention to the PZ Wiki should you feel like editing or amending something, and the PZ Mailing List that can send blogs like this and patch notes direct to your mailbox. We also live on Twitter right here! Our Discord is now open for chat and hijinks too. A general overview of the content of PZ builds past, in testing and upcoming can be found here.