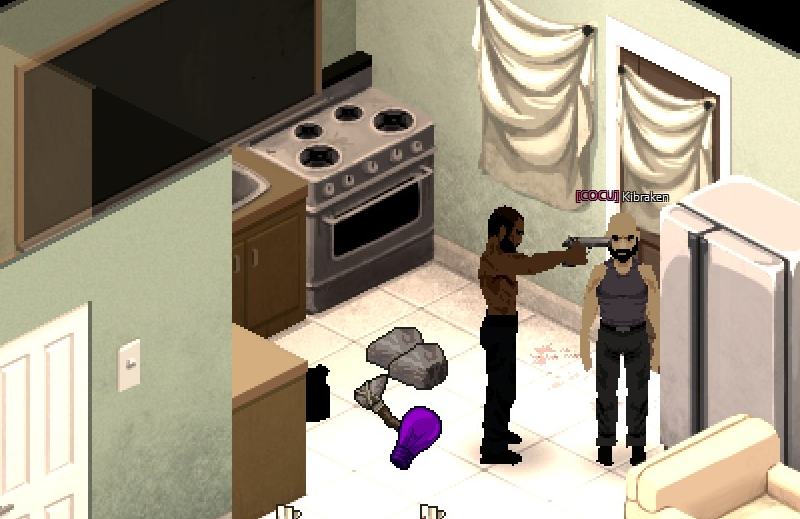 Hello! A few things from the big list of what’s cooking:

In the next IWBUMS beta release there’ll be a system that we’ve added to our new in-game maps. In essence on the maps you loot from zombie corpses in SP (specifically the ‘survivor’ zombies post-anims, when we have more control over clothing and appearance) they will often come with annotations written on them by that pre-zombie survivor, or perhaps their friends/family who tried to help them.

Sometimes annotations won’t help (zombie hordes that have since moved on etc) but more often than not there’ll be directions to interesting finds that have been left in buildings on the map. A weapon cache, tools, a booby-trapped safehouse, a dangerous building of boarded-up zeds and the like.

Depending on where in the PZ timeline you are, the more apt the different variety of ‘treasure’ that’s marked on the map. This will also be tied into our ‘random house’ system, meaning that we will also have control over how boarded up the places are, zombie numbers inside etc.

All stash description, contents and locations are done in lua, meaning that the community will be able to easily add to the system – and of course how frequent you can find these maps will also be a sandbox option.

The system will also work in MP, but because the system is reliant on highlighting unvisited locations it won’t last for long on big servers. Clearly, however, the annotated maps will be discoverable written by ‘real’ people in this instance though – so it shouldn’t be too much of an issue.

Unseen in the above video is an improved ‘handwritten’ font, and also new stamps for the maps system. We also intend to have stashes be a bit more visually appealing without them just appearing in crates or ‘underneath the sink’ – so things look like they’ve actually been hidden by someone in a hurry.

Okay, so here’s what’s happening with vehicles. Yuri, one of our inestimable friends from General Arcade, is currently making the streets and streaming of Muldraugh and environs a smoother ride for EasyPickins’ fab work on vehicles and physics.

The results have been really exciting, and at a later date the vehicle movement interpolation code can also be extended over into player movement to make life smoother for non-drivers too.

We’re not looking at a release in an imminent build, but we clearly are at a stage when we’re more comfortable with talking out loud about them – and Yuri’s engine-smoothening, performance-improving and zombie/player collision work over the past few weeks has been great to see.

In terms of visuals, meanwhile, Martin (whose name you’ll know for his animating mentions) has been tasked with creating various different vehicle models that’ll be found on the Zomboid map – and the various skins that’ll pretty them up and differentiate them. He’s working on these whenever he’s not working directly with us on the animations (or the other wilderness features the anims will unlock) so here’s an example of his current work on two different varieties of ‘pick up truck’.

There’s something of a community mapping frenzy at the moment with lots of cool projects bubbling away on our forum and in the mapper Discord. We just wanted to highlight Cardenaglo’s awesome sequence of islands known as ‘Bungil’ which is a really imaginative ‘Zomboid journey’ we’d love to see in action.

Xeonyx has also recently updated his New Denver map on Steam so that it plays nicely with Rosewood Prison, while it also sounds like he has the Rosebery expansion brewing nicely. Also a quick shout-out to Pat_Bren and his small Irish village of Ballincoolin. We saw your plea for love Pat. Happy Valentines.

This week’s featured image from the, hopefully not rude-named, Kobrakum. The Centralized Block of Italicised Text would like to direct your attention to the PZ Wiki should you feel like editing or amending something, and the PZ Mailing List that can send blogs like this and patch notes direct to your mailbox. We also live on Twitter right here! Our Discord is now open for chat and hijinks too. A general overview of the content of PZ builds past, in testing and upcoming can be found here.