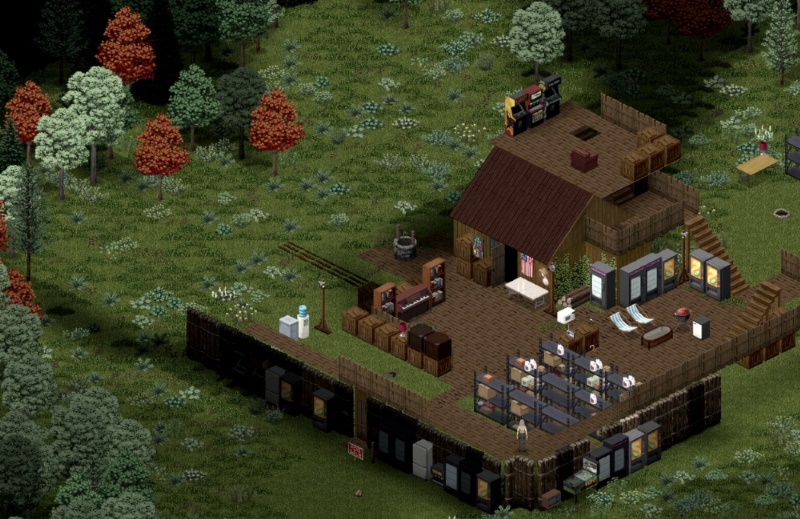 The vehicles branch has a lot of momentum at present, so right now there’s currently a lot being done behind the scenes to pave the way for cars, emergency vehicles and the like.

First off, however, now RJ is back in the dev saddle after his paternity leave we need to finalise and release Build 37 – primary highlights of which are in-game maps players can annotate, pre-annotated survivor maps for SP, new cooking features and many/varied other tweaks and fixes. To this end we’ll be releasing version 37.4 into the IWBUMS public beta tomorrow.

In the run-up to vehicles and anims we are taking the opportunity to fix as many of the longstanding bugs that’ve built up as we possibly can – including some long-term UI/moodle ones that’ve been a pain to those who play in split-screen for a fair old while. This bug tracker purge is ongoing, and if you want to help out with a report then the tracker lives here.

This week we finalized the in-house document that we’ll be putting in place to ensure that vehicles are a health hazard as much as a survival asset, that we’ll detail as stuff is built into the game. In the interim, though, what’s been done this past week to ease in and facilitate EasyPickins’ and General Arcade’s long-promised physics-enhanced vehicles into a new test build, and beyond?

Engine smoothening. One of General Arcade’s primary vehicles branch entanglements has been in improving PZ’s capabilities in terms of map streaming and pop-up – but another issue we’ve butted up against frequently in the past is stuttering caused by Java’s resident gremlin ‘the garbage collector’. As such this week TIS have successfully spelunked into the deepest depths of PZ’s code to optimize affairs, which will have an impact game-wide and also make prolonged vehicle travel through busy/forested areas a far smoother ride.

Road decorating. When the a vehicles test build is released there won’t be a car on every drive (although vehicle proliferation will be a sandbox option) and as such we’ll be adding reasoning to the radio/TV lore and we also intend to have build-ups of destroyed vehicles on roads – especially towards the edge of the current map. It’s possible we’ll face engine limitations, but what we’re aiming for is a feeling of failed escapes from the Exclusion Zone when the sickness first descended on the area.

Anims Compatibility Ensuring. Given the recent surge in activity that vehicles work finally coming to the boil has wrought, and the possibility that this will see them going into the full game prior to anims, a focus this week has been in ensuring that vehicles and anims systems will play nicely together. The main difference between the two branches is that the animation build effectively removes a system that’s been in the game since 3D models were first introduced: the fact that every frame renders the 3D characters into 2D sprites that draw in place.

Now, in the anims branch, isometric projection draws the characters in-place at the right place in the screen. This is a major optimization that removes the requirement of off-screen FBOs that are unavailable on some older cards, as well as optimizing the draw speed and makes the root motion (as well as interactions between multiple characters) work properly since the models and game world share the same coordinate space. As such, right now we’re sucking the vehicle juice out of their branch and redistributing it into our anims work – to make sure it all gels together when the time comes. There will be other things that need fixing up, but this is the main issue to resolve between the vehicles and anims branches and greatly benefit both in the end product.

Map Expansion. We generally don’t talk about map expansion until it’s ready to hit, but the next area will make full advantage of players being able to naturally spread out from their traditional urban starting points. There’ll also be vehicle-based locations we haven’t been able to feature before.

Other stuff! Two more items of note this week. First off, one of our bigger international player-bases can be found in Brazil – yet the PZ community translation for Brazilian-Portuguese has generally been ‘not brilliant’ and incomplete. As such we’re very pleased that a new version is imminent.

We’re also really excited to see the first mod appear on the workshop created through ItemZed (MilkMod!) and hope it’s the first of many. Our thanks to Thiosk for his feedback too.

Finally, we always knew that Spiffo was a badass but…

This week’s featured image from the one and only ʅ（´◔౪◔）ʃ. The Centralized Block of Italicised Text would like to direct your attention to the PZ Wiki should you feel like editing or amending something, and the PZ Mailing List that can send blogs like this and patch notes direct to your mailbox. We also live on Twitter right here! Our Discord is now open for chat and hijinks too. A general overview of the content of PZ builds past, in testing and upcoming can be found here.