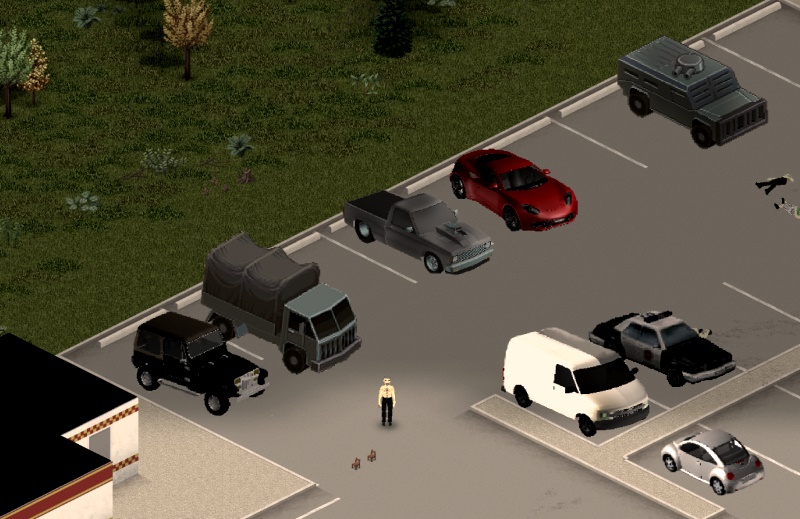 There’s a plucky modding adventurer who’s been digging into the PZ mainframe, connecting wires and conducting wild experiments for a while now. He’s an ingenious soul, and we thought it’d be good for us all to get to know him better.

As such, here’s comes the thrilling return of the Mod Spotlight. Or, more to the point in this instance: Modder Spotlight. If you’re interested in the many and varied works of Nolan then you can find his Workshop here.

Hello Nolan! First off, could you introduce yourself? Who are you and where are you from? What do you do in your ‘real life’?

You didn’t know that I’m Canadian, eh? That’s okay we Canadians don’t get offended that easily. I’m also part Japanese. Well, at least some of the culture and language is integrated into me. I lived in Japan for a few years, and have a number of Japanese family and friends so I’m sort of… part Japanese?

Professionally, I studied Computer Network Engineering and afterwards got a job as a Laptop Technician for about a year. From then on I worked as a web development freelancer, or on short contracts with web dev or database/sql stuff.

Right now, I’m working on a few projects on a very secretive contract with a company that has a new software product that’s unlike any other that’s gonna take the filesharing world by storm! Well, hopefully, because I could use a raise.

In my spare time I’m also often programming stuff like tools, cheap little games, or my own website ideas. I’m quite picky when it comes to actually playing games. I can’t stand learning how to play new games, so I just play the old ones that I know how to play.

What’s your history with modding on other games before us?

PZ would be the first game I’ve modded. Unless… does an undetectable farming bot for Diablo II count? [Editor: *unsure face*]

I have done some game design though. Or, more to the point, I’ve made countless attempts to make 2D games with the likes of C++ and SDL. I say ‘attempts’, but really what happens is that I lose interest somewhere along the way every time!

How did you first discover Project Zomboid?

You probably won’t believe me on this one but… I discovered PZ while I was trying to make an isometric game engine for a zombie game. I had envisioned a game like PZ and then searched vigorously on the internet assuming something like it must exist. Unfortunately, I didn’t find anything apart from zombie shoot-em-ups.

Once I’d given up looking I thought, half-jokingly, about making something like it myself. I spent a few months on my isometric game engine: copying furniture, walls and such from the Sims 1. I had a nice level editor thing going on, I could make a house and such…

So I then thought I’d go rip off some isometric character sprites from google images to use in my ‘game’, and it was then when I was scrolling through google images, I saw a screen shot….OF THE GAME I WAS MAKING.

Well more or less the same thing: a screenshot of someone playing PZ. So obviously I followed up and that led me to Zomboid. At that point, I was kind of relieved that I didn’t actually have to make the game myself. It already existed!

I confess I didn’t immediately buy the game, I downloaded the demo version (from the Pirate Bay!), and after playing it for a while I was impressed enough that I did what I had never done before – and actually bought the game!

We are proud and happy, Nolan, that Zomboid was the game that turned you away from such dastardly and wicked ways! So anyway, you are easily one of the most prolific PZ modders. So why Zomboid – and where do you get your ideas from?

As for my ideas, well they weren’t all mine. And I’m sure some people before me thought of those things, but I was just the first to actually be able to scrape the idea into something more real I guess.

You’ve created many mods for PZ, but which is your favourite? How did it come about and how did you make it a reality?

Maybe the Silencer mod? It was my first mod, and I made it because I really wanted a silencer at the time. I had just seen the Pillow Silencer mod, and thought why not a real silencer?

Even though I had never even heard of LUA language, it wasn’t hard for me to get to grips with it and manipulate the code because I code in other languages daily whether in my employment or spare time. So it didn’t take me long to mould it into something nice!

That’s actually how I made most of my mods. Because I wasn’t familiar with the LUA language or PZ’s Java methods and structure, I would find a similar mod that was open to community development (or one with a similar mechanic I knew was necessary) and would just start manipulating the code. So if anyone reading wants to start modding, I recommend this as a good way to start

What challenges do you face when creating stuff like your vehicles mod, when the released game’s framework for them isn’t yet in place within the code?

The cars came about because someone had mentioned to me that a certain server had a teleporting taxi cab mod. I thought I’d try and make something like that at first, where a car on the ground could just be used to teleport to various places.

After a while it became clear that it wasn’t going so well, and I eventually just started looking at actual movement. I knew I could make the player ‘drive’ around by setting coordinates in game loop, with some physics variables and calculations and such. That’s how the 2d games I have made work.

My cars are actually ‘bags’ from the game – and at first I didn’t know how to get them to move with the player. Then someone showed me the projectzomboid.com/modding/ documentation, and it was there that I found all the methods needed to make the functionality work.

The modding doc site showed me a function I can use to drop items, in my case Car “bags”, on the ground. So I set the Car bag to re-drop at the players feet every time the position is reset in the update loop which is a good number of times every second.  I also found the setTexture method for items on the doc which means I could change the image of the car based on its physics variables to make it face the way the car is driving.  Of course that means I had to make many images of each car at various angles, but hey: worth it.

So after finding the methods I needed from the modding doc site, at that point I knew I had all the needed ingredients so… it was time to make the cake.

Other functionality and features just came along the way as a response to all the mod’s positive feedback. To be honest though, most of my time on the car mod was spent trying to find a way to make it work on MP. I never really found a method that I was satisfied with.

What’s next in the Nolan mod pipeline?

At the moment, I’m not thinking about any new mods. I’m just thinking of ways to improve the stability and reliability of the Survivors mod, as it’s hard to move onto other features when there are still lingering problems.

However, just like how so many of my mods were born, a new feature could come out and then I could suddenly have all the necessary ingredients for something interesting. Something new could pop into the Workshop all of a sudden!

Editor’s note: Since Nolan spoke to us about all this cool stuff, the following popped into existence all of a sudden!

What other Project Zomboid mods and modders would you recommend that people check out?

I’ll shout out to ddraigcymraeg who has recently been contributing to Survivors. He added a ‘Hostile Marauders’ event that can happen while you sit around in your base. So lock your doors! He has made some mods of his own too. Check them out!

Also thanks Tommysticks for making the Chainsaw model for my Chainsaw mod. He’s got some nice weapon mods as well.

Anything else you’d like the blog-reading world to know about?

I’ll take this opportunity to share something else I made that’s PZ related, and that I think most people don’t know about. It’s a character build planner page.

When you want to show someone what build you use, go to the site, click all your traits and input all your other info. Then the URL updates as you click around, so just copy the link and send to whoever you want. When they click, they’ll see your build straight away!

Our thanks to Nolan for all the cool stuff he brings to the Workshop, alongside all the other modders beavering away to make gruesome zombie survival a more fun and varied experience.

In fact, if there’s any other particular mod or modder you’d like to see with the name in bloggy lights then please just let us know!

Modding | 26 April 2021
Project Zomboid | Copyright © The Indie Stone 2023. All Rights Reserved.
Site by Redwire
Stable Build: 41.78.16 | IWBUMS Beta: 41.78.16 | Version history | Wiki
Follow us
Manage Cookie Consent
To provide the best experience, we use technologies like cookies to store and/or access device information. Consenting to these technologies will allow us to process data such as browsing behaviour or unique IDs on this site. Not consenting or withdrawing consent, may adversely affect certain features and functions.
Manage options Manage services Manage vendors Read more about these purposes
View preferences
{title} {title} {title}