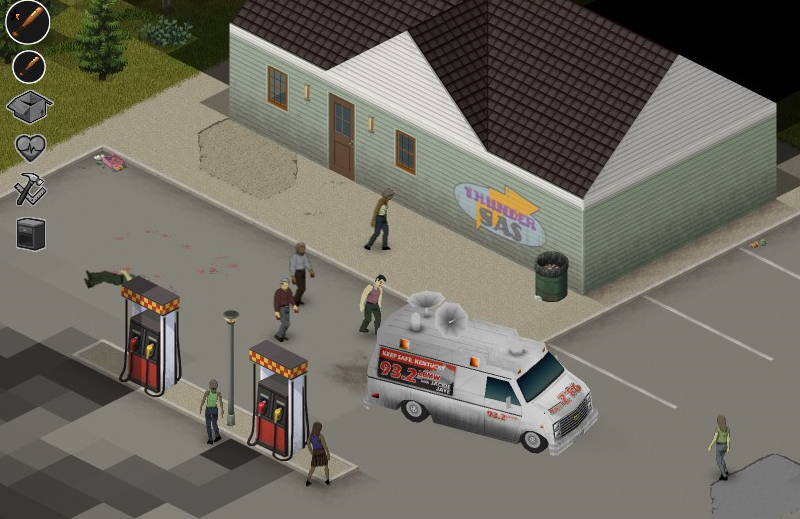 Hey all. Many thanks for all the vehicles thoughts and feedback over the past week. More of which below…

Last week we released our Vehicles Tech Test build (details here) and the community has been giving us loads of technical feedback, spotlighting bugs and useful ideas for their future development. We’re going to keep this beta branch open and updated for the foreseeable future. It seems that most testers have been having a lot of fun with them, and are pretty enthused so: yay!

We released a new version on Thursday that gives vehicles placeholder sounds and also addressed a physics bug that was causing FPS degradation – but some choppiness remains for some systems. As such Yuri is currently looking into further rendering optimizations and also investigating the way draw order currently operates.

In the mean-time Mash has finished her pass on the more neutral ‘PZ’ colours for car textures, and this new art style will be added into the game fairly imminently for testers to check out.

Getting the tech working well for everyone is currently the 100% priority (this, and then physics improvements, will be the focus for the next little while) but it’s probably a good juncture to respond to common queries that have been raised since the release.

Overall we’re planning for car maintenance to work (and look) a lot like the current player health/medical system – everyone can use it in a basic sense, but those with specific skills and professions will be able to identify what’s wrong with an engine. We also plan to cross-pollinate some aspects of ‘vehicle work’ with relevant existing professions that are already in the game.

Zombie attraction levels to car noise, and the radius it’s heard within, is currently set really high in the Tech Test. This is partly because we wanted to push systems fairly hard, and partly because it’s better when balancing to drop things down in terms of difficulty rather than raise them up. As such Zed vehicle-love will be dropped as we go until we hit a sweet spot. This said, down the line, vehicle noise will depend on what’s being driven and engine condition – as well as how easy it is to start the car, backfiring etc.

Barring a few necessary fixes to Build 37, RJ is now in full-flow on Build 38. A key component of it is likely going to be the necessity of body disposal should corpses stack up around your safehouse.

The current method for corpse-riddance (gas + flame) is fairly inelegant, and the punishment for decaying corpses around your home is more through it looking untidy rather than it having an impact on health, infected wounds etc. In a real zombie apocalypse this would be a bigger issue for a survivor than it currently is in PZ.

As such we’re going to be looking into more effective corpse management (body pits, graves, perhaps pyres and wooden crosses / memorials for RP) as well as some gameplay encouragement to do so.

As regular readers will know we now have Mark with us on the long-promised animations system who, in another life, a few of us knew either from his long-ago time at Reflections (‘Driver’ games era!) or in his more recent technical roles at SEGA Europe. He’s currently going great guns in creating a new model format for the animations (now pretty much complete) and providing a new exporter to streamline it all and circumvent a bunch of the issues that have routinely been blocking us.

This week we’ve also had another coder join us from our triple A pasts, another Chris from the wilds of northern England, but we’ll introduce him in more detail in future once he gets settled in. We’re also delighted that General Arcade will be also be providing additional support in MP and Engine optimization for the next few months too. Speaking of…

Something weird has happened with Steam Invites and the guys from General Arcade, who built us the system, are looking into it. Basically: in most cases when Steam invites are sent from a host, they’re not being received.

The issue currently doesn’t seem to be tied to any particular PZ update or patch, so it seems likely that it’s something that’s changed somehow in Steam’s workings. In any event, Detective Sergei is currently on the case.

In the mean-time a workaround to the issue that has been working for some people, as highlighted out by Onkeen and further investigated by Nasko on the PZ Discord, runs as follows:

Have you ever wondered what it’d be like to survive a zombie apocalypse in would be like in ye olden days of yore? Well wonder no more…

This week’s featured news van from Retro. The Centralized Block of Italicised Text would like to direct your attention to the PZ Wiki should you feel like editing or amending something, and the PZ Mailing List that can send blogs like this and patch notes direct to your mailbox. We also live on Twitter right here! Our Discord is now open for chat and hijinks too. A general overview of the content of PZ builds past, in testing and upcoming can be found here.