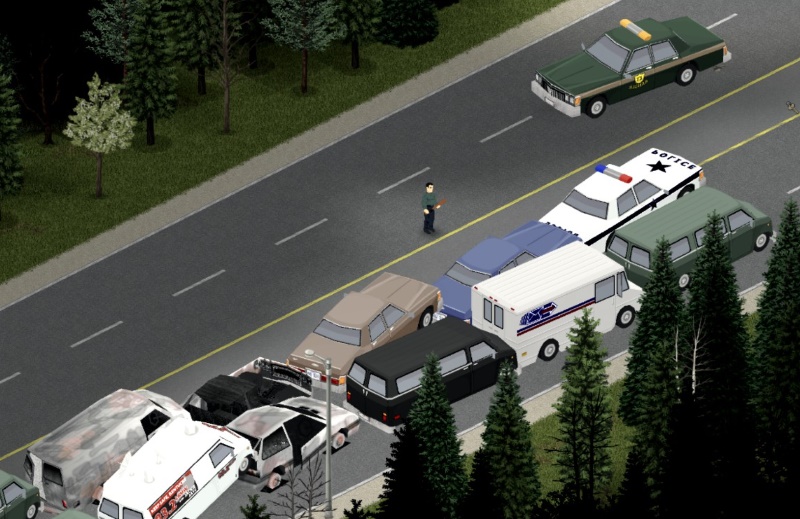 We’re just finishing off a new update for the Public Vehicles Tech Test – details on how to join this can be found here. This will address some of the FPS degradation issues that testers have been reported, rebalance zombie attraction so it sits somewhere in-between the two levels we’ve already provided and added a few debug settings to let us play around with balance. It’ll likely go live tomorrow.

Last Wednesday we also updated to include Mash’s newer textures (seen above and below) which seemed to go down pretty well, alongside an improvement to draw order and woodland that’s less drive-through.

Our thanks for all the great feedback and thoughts on the system that’s appearing on Steam and our forums. Likewise the reports of the various things that have been broken on the vehicles branch that have been getting in the way of general survival (loot tables wrong, light switches not there etc). We’ll address the latter, and then get into more gameplay development once the current tech and performance-centred work is complete. [Cheers to Hunger John for the above pic too btw].

Hello RJ! So what’s up with this ‘corpse management’ stuff we mentioned last week?

“Essentially, having piles of rotting corpses around your safehouse could now make you sick. It will be a slow process that’s dependent on the amount of bodies near you, but the longer you stay near them, the more your survivor will feel queasy.

To avoid this, you should get rid of the corpses near your main base by burning them or burying them in our new graves. I’m also including a new sandbox option to let you determine just how much rotting corpses will repulse you and make you feel ill.”

We’re not going full ‘wash your hands, folks!’ but in general we’re going to add some hygienic sensibilities when it comes to zombies too. Could you explain a little?

“This is a system that will come into its own with the new animations/models when they appear, but it will be clear enough in-game currently that things like getting zed blood on clothing through melee combat and leaving it there will be a bad idea. If you have any open wounds the chances of it getting infected will be higher.

To a lesser extent clothing will get dirty and more ragged over (a long period of) time, with a similar system. This will have a super-gradual impact on wound infection, and will essentially mean that you won’t want to be wearing the same outfit for months on end as you currently do. This, again, will be built on once the new models are in but will work fine in the mean-time – and you’ll be able to switch it off in Sandbox options should you wish.”

You also mentioned some new sandbox options for when people start up new games?

“Yeah, here are some of the fun ones. This is not a full list! I’m still adding them!

So with all this you could, say, get a better I Am Legend feeling with a pitch black night and zombies sprinters only active during the night. I tried it, and it’s pretty scary.

If the community would like me to put any other Sandbox options, toggles or sliders into the game for them then please just let me know on the TIS forum!”

As mentioned last week, we’d now like to officially welcome General Arcade’s Stas to the PZ codebase. First up he’ll be making a deep dive into our MP codebase to optimize systems and get to grips with some of the more complex bugs that impact on our server admins – and beyond this our current plan is to get him optimizing the main game to make the engine smoother so we can get to integrating our more built-up urban environments. He joins Chris (a new one) and Mark in terms of recent coder acquisitions, and everyone seems to be bedding down quite well. More to follow when their work starts to flow!

This week’s pile-up from the (perhaps) rudely-named Koitus. The Centralized Block of Italicised Text would like to direct your attention to the PZ Wiki should you feel like editing or amending something, and the PZ Mailing List that can send blogs like this and patch notes direct to your mailbox. We also live on Twitter right here! Our Discord is now open for chat and hijinks too. A general overview of the content of PZ builds past, in testing and upcoming can be found here.