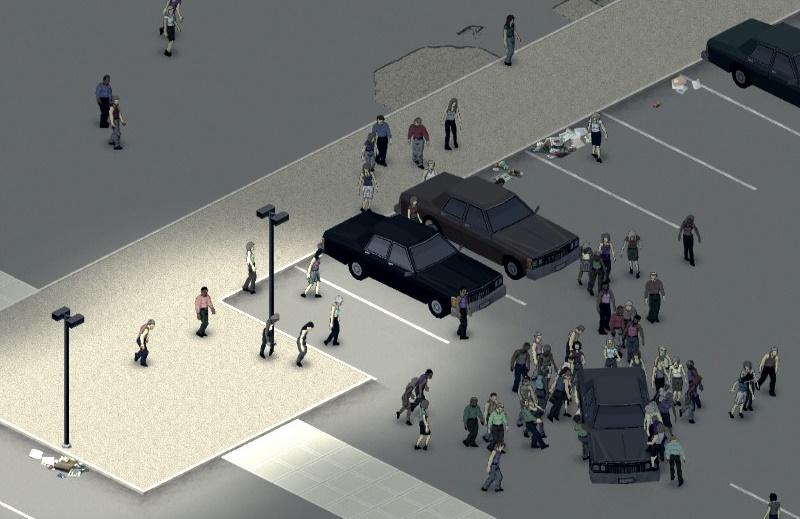 Hello! Let’s get down to zombie business.

Quite an intriguing update to the Public Vehicles Tech Test build today – but first off a quick Public Awareness Notice that the ‘engine ignition’ key has been changed to ‘W’ as that should feel more natural for new players. We’ve also taken the password off the beta channel, as everyone knows it’s WIP content now.

So what’s in the new build? Previously all vehicles had their wheels in the same place so, following Animator/Modelling man Martin’s guidelines, Yuri has been making sure each car has its tyres spinning in the correct place.

This, temporarily, made the vehicles fly – which was not the desired effect. Yuri, then, has now gone back in to debug each vehicle individually and also used the opportunity to experiment and improve handling/feel on each of them. They should feel a lot more distinct now, but we’re still at an experimental stage so you may well like some changes more than others. Early feedback is really good, but sounds like we need to finetune sports cars and vans a little more in terms of turning circles and spin-outs.

In terms of performance, things are a lot more stable now but there’s certainly still room for improvement in terms of FPS. As such with this build we’ve also introduced some new caching to the LightingJNI interface which should make things smoother game-wide.

To make life easier for our amazing testers (who are providing so much good feedback) we’re also now addressing various ‘irritation issues’ that have crept into the Tech Test that prevent ‘proper’ PZ playthroughs – stuff like the loot table being messed up on reloads, rain somehow breaching ceilings on anything above the ground floor etc. These will be added to build during the week.

The most pressing however, the ‘survivor is stuck on top of a flipped car until they starve’ bug, should be fixed in this new release.

Those who were struggling to send/receive Steam invites to private servers should now find the issue fixed via a recent Steam update. If you’re still having issues then please try restarting Steam to make sure you’ve caught the latest version.

Our thanks to Sergei from General Arcade for all his investigation work into the issue, and to Valve for being on the ball in terms of the fix that remedied the situation both for us and a variety of other games.

RJ’s work on Build 38 continues – as mentioned last week at first it’ll introduce a bunch of new sandbox options, experimentation with darker nights, negative consequences for survivors who let fetid corpses stack up outside their safehouse and new ways to bury/burn/dispose of corpses.

Mash is currently creating new sprites for graves, pyres and RP-enhancing memorials and crosses. We should have news on when the IWBUMS public beta will be ready in the week ahead. It’s also a fair bet that Mash’s next map update, including the Knox Heights Country Club, will be a part of Build 38 – although it’s unlikely to be a part of the initial testing.

Elsewhere our new workers are getting used to the new codebase. GA’s Stas is ready for his deep-dive into the MP code and his warm-up ‘introduction task’ is to look into some of the crashes our server hosts face. NewChris, meanwhile, has begun investigations into improving the single building cutaway system and making interior cutaways while inside buildings to be more Sims-esque. This, in turn, should lead into his wider mission that we’ll discuss a little later down the line.

Mark’s work on streamlining the foundations of the animation system, meanwhile, has brought him up to speed with the ins and outs of the code – and with his expertise on board we feel we’ll finally be able to bring you good news while vehicles are finished off elsewhere. In the background Animator and Model Man Martin hasn’t been resting easy, and recently has been polishing weapon and weapon upgrade visuals according to community feedback and getting ready for the time at which Mark requires everything re-exported under the improved export/format system. [Away from this Martin has also been creating some awesome-looking military vehicles for implementation further down the line.]

At this point we’ve got double the bodies working on PZ that we did at this point last year (it really has been like ‘London buses all turning up at once’ in terms of the talent that has become available) and, much as we know that PZ development has been slow, we hope that the introduction of The New Batch will bear more and more fruit as the year goes on.

In final news, if PZ Modding Hero Nolan ever wants to create a Back to the Future Part II flying car mod then the opportunity is now here! Where we’re going we don’t need roads…

This week’s car lot tragedy from Ellihow. The Centralized Block of Italicised Text would like to direct your attention to the PZ Wiki should you feel like editing or amending something, and the PZ Mailing List that can send blogs like this and patch notes direct to your mailbox. We also live on Twitter right here! Our Discord is now open for chat and hijinks too. A general overview of the content of PZ builds past, in testing and upcoming can be found here.