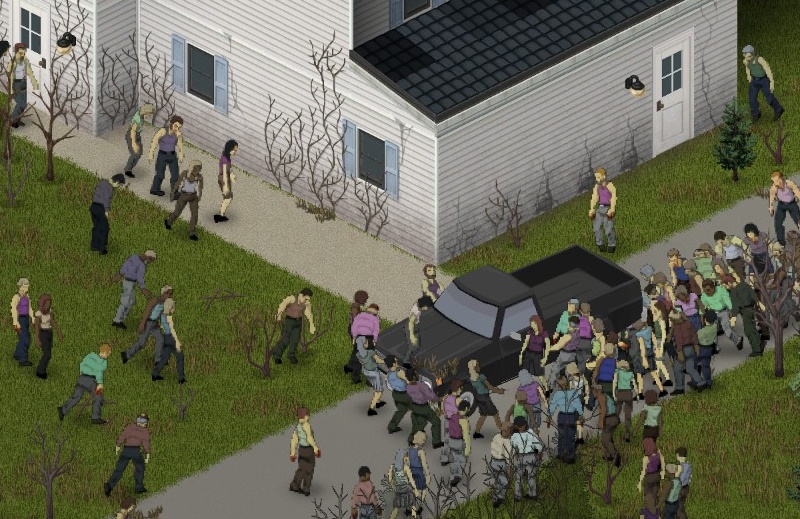 Afternoon one and all! Here’s t’news.

The public Vehicles Tech Test continues, and its been fascinating watching testers adapting their PZ play-styles and spreading themselves out over the map. This week we even had our first retexture in the form of Lexx2k’s camper van, which bodes extremely well for the modding community.

Right now Yuri is reworking aspects of the physics model to fix a bug we’ve had with car bouncing, and simultaneously improving the slow turns on vans, and over-sensitive steer on the sports car. Once this has been done we’ll be opening up a specific feedback thread that’ll cover each different model of car on the TIS forum, so that it’s clear exactly what needs refinement on each different vehicle.

We’re also midway through some work on zombie collision. Currently holding down ‘W’ key while driving into zeds actually means they react less, and coasting into them without acceleration has a greater impact. As such zombie/car impacts should improve in the next couple of builds.

Finally, Yuri has been chasing down the occasional memory leaks that were popping up and causing stutter-mayhem – and, in particular, a tricky one that appeared when testers died and reloaded. We seem to be getting there with major performance tasks on the vehicles Tech Test, but fringe cases of game-breaking issues do occasionally pop up in player reports.

As such if you’re experiencing any super slowdown and juddering on the vehicles build then we 100% need to hear from you. So please leave your findings, and importantly the details of the system you’re running PZ on, here.

NewChris has taken to the eccentricities of Java worship (following his former days in the church of Unreal) really well – and already has a backstage branch running showcasing his changes to the PZ building floor render code.

His first mission, to get him acquainted with PZ, is through rejigging the world rendering to stop the game from hiding the roofs and upper floors of every building on-screen as soon as you step close to any building.

Instead, the game will intelligently collapse just the building you are stood behind or are stood inside. It’s already clear from playing the test version that players will get a more immersive feeling, instead of having to view buildings that have been sliced up by PZ’s old ways of doing things.

The next step will be to look into implementing some more ‘Sims-like’ cut away walls to interiors, to eliminate the transparent walls we currently have, and provide a much nicer system for navigating inside buildings – while being able to see the floorplan layout much easier. It’s currently unclear whether these improvements will be going into the coming IWBUMS or the next, but good stuff is already starting to flow.

As mentioned previously we’re now working with our new/old friend Mark to get animations over the line. Mark was previously Technical Director at SEGA Europe, he loves PZ and he really knows his shit. He’s investigated the roadblocks we were facing, and we’re now working together with him to navigate it all.

For example, Mark is implementing some good ideas for handling rotational root motion from his experience on other games, and this week will also be working on a new tool that will make anim state xml handling easier for both the wider team and the community. He’s also going to be adding in some optimizations for how our existing system handled hair that’ll save on skeleton processing, and to allow for us to improve the way we were integrating the new animation system with the existing state machine that the rest of the game logic relies on.

It’s all good and necessary stuff that’s given us renewed momentum backstage, and hopefully that’ll become clearer front-of-house too in the weeks to come.

We’ll likely be opening up a new IWBUMS for Build 38 over the next week or so – featuring RJ’s corpse management discussed in previous blogs, bloody clothes increasing wound infection risks, graves, pyres etc. It will also feature General Arcade’s work on MP Discord integration that we’ve had stacked up behind the scenes for a while, potentially some of the NewChris work described above and hopefully some Turbo stuff and Stas MP stuff too.

A quick note to say that the in-game maps of Build 37 have now been joined by one for our RingoD-curated community map Bedford Falls as well, as designed by Ringo himself. He’s now working on some stash maps for it too, as well as writing some guidance for the community on how they can create their own.

This week’s car frenzy from (ЗлОй_КаКтУс). The Centralized Block of Italicised Text would like to direct your attention to the PZ Wiki should you feel like editing or amending something, and the PZ Mailing List that can send blogs like this and patch notes direct to your mailbox. We also live on Twitter right here! Our Discord is open for chat and hijinks too. A general overview of the content of PZ builds past, in testing and upcoming can be found here.