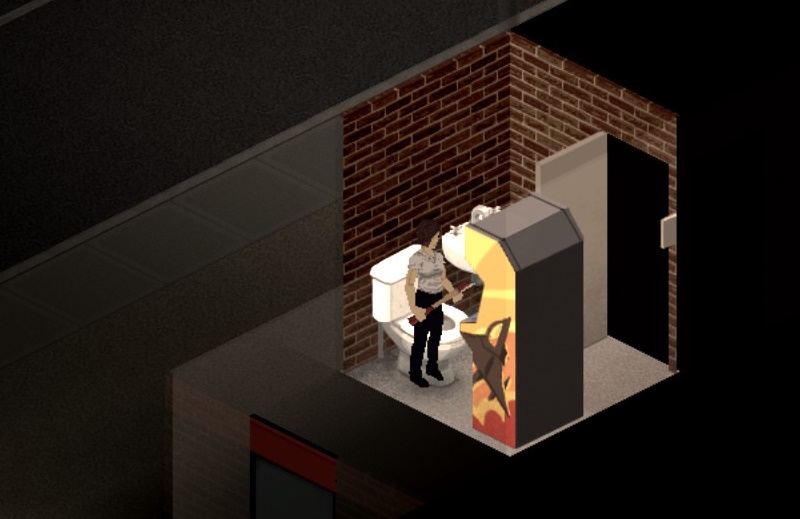 Ello, here’s the latest on matters both zomb and oid.

We just pushed a new version of the public vehicles beta (access details here) in which the headline improvement is probably the improved zombie collision. Formerly piling headlong into zombies without acceleration seemed to have more impact on zeds, so hopefully things will feel a little more realistic now. Likewise collisions with car wrecks would previously slide along like ice hockey pucks, and they now should hopefully feel as if they have more weight and presence in the world.

Yuri has also cleared a bunch of bugs from our plate that our awesome testers have been reporting – including fire errors, persistent engine noise, radial menu problems and the somewhat dangerous ability to read a book while driving.

Our general plan with vehicles will likely be to merge them into the next round of IWBUMS testing as an optional ‘experimental’ sandbox feature (unless the existing one stays in testing for more than a couple of weeks). The thought is that this will allow us to get the vehicle branch’s many engine optimizations into the main game, widen player feedback and also remove the irritation of constant swapping between test builds for our merry band of community bug reporters.

As a part of this we’re also now looking into integrating proper sounds for vehicles that reflect their type and condition, and while we’re back in the FMOD studio we’re also taking the opportunity to polish a few other areas of the PZ soundscape.

We’re looking at stuff like different footstep noises on grass, concrete, snow, wood, from a higher floor etc and also more varied seasonal sounds. Right now we have a lot of birdsong in winter, for example, which could be easily removed and replaced to give a better feeling of seasonal change.

Feedback on the more visible upper storeys and window peeking that are currently part of the IWBUMS public beta seems pretty positive – but there are two primary issues that need to be ironed out before we can release.

The first are visibility issues with porches, overhangs and buildings like garage forecourts with supported roofs – as is shown here by Captain Dringo. The best way to sort this is to have the data marked up so that canopies and porches and similar structures can be hidden cleanly – to which end Mash has been marking up impacted locations on the map. This week ChrisW will be adding the code fix and remedying cases where small overhangs are attached to buildings. This procedure will give us an effective way to hide anything that blocks the view.

Currently the system never hides the player or the nearest zombie, but we also need to expand this to other survivors for MP. Likewise to finalise his fixes Chris will be making sure that player built structures and additions respond to the same rules as the game’s pre-existing buildings.

It’s been off the boil for a while, but Turbo is back on his upgrade to how in-game devices operate and is chasing down bugs and networking issues in a newly operational build. This is an under-the-bonnet feature, but it’ll allows us to make the use of radios, TVs, VHS, computers, military equipment etc a lot more engaging – and will also open the door to a lot of modding.

Turbo’s modular system essentially standardises the code that runs the various different in-game gadgets, and will have repercussions (whether from us or from the community) on how easy it is to introduce/improve a wide variety of in-game and in-building systems. The sort of stuff that’ll now be far easier to create, either officially or from modders, would be: recording/playback of messages, device deconstruction and upgrading, player-created electric wiring and waterpipe systems in safehouses, security systems places like Rosewood Prison and banks, various items of discovered military equipment etc.

First off: everyone keep an eye on what Rekkie’s up to in this thread – as we certainly will be. In terms of ‘us’ stuff though well we’ll have another IWBUMS public beta update later this week from RJ, while Mash’s map work on the next main game area continues. In the long wait for animations, meanwhile, Martin’s still churning out new clothing and models backstage so we’re sitting on something of a stockpile back here while Mark does his stuff. We’ve refrained from showing much during the lengthy delay, but this one that popped into our inboxes this morning made us do a ‘squee’ as it really nails the 90s ‘Outbreak’ movie vibe that we generally go for. And also we don’t give Martin enough love for what he’s doing so well for us behind the scenes.

This week’s engaging water closet from Hootie. A general list of stuff added to PZ, and vids of features being worked on, is kept here – so you don’t have to plough through endless Mondoids for info. The Centralized Block of Italicised Text would like to direct your attention to the PZ Wiki should you feel like editing or amending something, and the PZ Mailing List that can send blogs like this and patch notes direct to your mailbox. We also live on Twitter right here! Our Discord is open for chat and hijinks too.