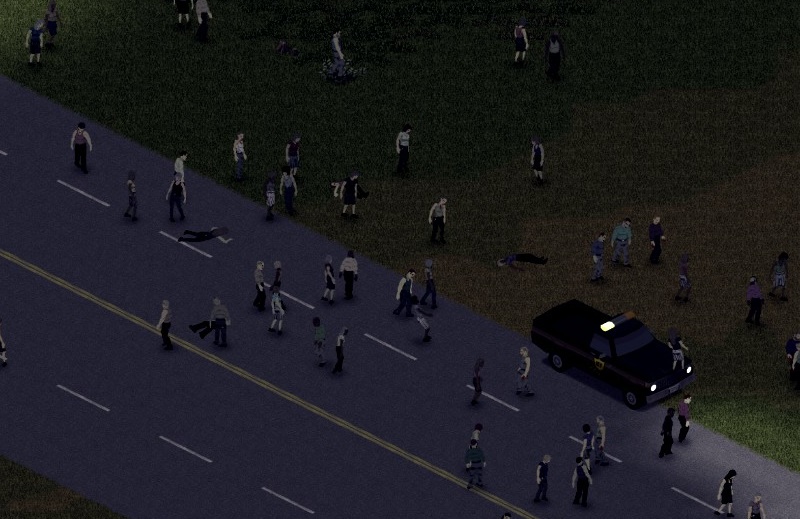 Hey all, Thursday blessings be upon us all.

Last week we moved our vehicles build into the more established public IWBUMS beta slot, and asked for feedback from survivors who hadn’t taken them for a spin yet. What we’ve heard on this issue has been pretty positive (and most of the bugs flushed out in the process have been minor in the scheme of things) so good steps have been made toward the public release.

The primary thing that we’d like to address before releasing properly is the fact that in the current build connecting to a distant server can result in slow map/chunk loading – an issue we’ll have networking guru Bitbaboon Steve investigating tomorrow.

In the mean-time bug-fixing and polish continues, including nips and tucks to a few longstanding features so that we have as clean a build as possible for the public release – and the inevitable bug report deluge that will come with the seismically wider audience. To this end we just released public IWBUMS beta build 39.45.

Amongst many other things this build will increase the number of different places you’ll find car keys, improve how car fade-out works, stopped ‘fake dead’ zombies being able to bite you through vehicles, fixed receiving broadcasts giving you XP, increased loot spawn chances of items like shovels and cigarettes, provided sandbox options for how much gas is found in vehicle tanks and fixed/updated the burnt out car wrecks.

Vehicles, and the engine changes made to accommodate them, are the second biggest change PZ’s seen since its inception – with the animations and character models update that BitBaboon Mark is currently working with being the biggest.

You might recall a bug that we spotlit in this video – that when a character was loaded up from a save he/she would appear as an uncomfortable-looking ball. This was because there was no weapon profile attached, and therefore had no idle or walk anims to fall back on.

To fix this issue, and to improve the animations build as a whole, Mark has now made this process data-driven. He’s implemented a substate system and layers to the impending animation code that allows for many continuous ‘states’ to be blended together based on a character’s situation.

“Imagine a character that has a lightly damaged leg and badly damaged head,” explains Mark. “This system would calculate based on these parameters: blend together a walk animation, a bit of a left leg limping animation, and on top of that also blend in the holding head animation.”

“This allows us to have an (overall) small and more polished set of animations – which can produce a huge range of results based around the character’s situation. In addition to the code under the hood, the data is also being modularised along with in-game tools and our AnimZed editor – so that we can validate and implement easily.”

In addition, it shouldn’t go unmentioned that this opens up the animation system to extreme moddability since the state system can be modified in a text file and use common export formats for animations and models.

With his initial work on the new chat system and java upgrade complete and waiting for thorough testing, General Arcade’s Stas is now starting work on improving gamepad controller support for a later version – as there are many players who like to veer away from keyboard control, or are ardent split-screen players.

First on the menu will be the ability to select your pad and test it’s working from PZ options screens, then the ability to adjust button bindings and a ‘general info’ tab to guide players with more specialist set-ups.

Turbo’s work on giving a greater feeling of seasonal change to PZ, and a system that provides more realistic seasonal weather variation continues. With the caveat that the visual intensity of these features still requires some balance, here’s a time-lapse of some WIP summer weather starting on the 4th July.

Then here’s a far faster timelapse of wintry scenes. Here you can see EP’s existing fractal snow now synced with the climate system’s snowfall values and associated strength. Snow also melts away based on temperatures above zero and sunlight factor. We’d like to improve the overall checker-board way in which snow appears/disappears, but then again this is also less jarring when seen in-game and not with time sped up significantly.

This week’s night drive from Tęsknię za Amy. A general list of stuff added to PZ, and vids of features being worked on, is kept here – so you don’t have to plough through endless dev blogs for info. The Centralized Block of Italicised Text would like to direct your attention to the PZ Wiki should you feel like editing or amending something, and the PZ Mailing List that can send blogs like this and patch notes direct to your mailbox. We also live on Twitter right here! Our Discord is open for chat and hijinks too