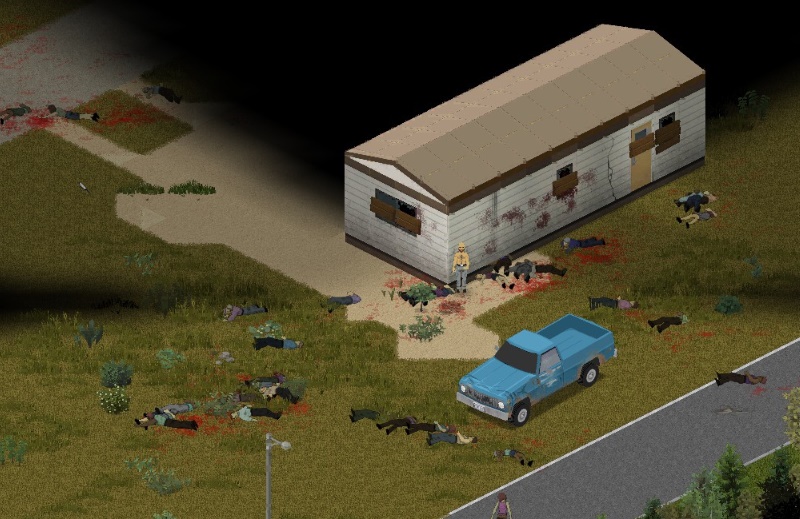 Survivors of the Knox Event can now drive vehicles and explore every nook and cranny of the vast Project Zomboid map.

Vehicles are enhanced with real physics, and come with all the expected sundries such as a UI dashboard, headlights, expanded inventory space, car horns, air conditioning and car radios – and the capacity for breakdowns, part replacement and collision damage.

Mark.exe has been kind enough to record a short video to explain ’em. Please consider going and subbing to his channel if you don’t already!

Nine different vehicle models are available – not including variants on these such as branded vans, or emergency vehicles. The PZ garage runs the gamut from family cars to police sedans, to Spiffo restaurant vans.

Vehicles can be found outside homes and in parking lots – while keys can be found in nearby homes, in the vehicle itself or on the floor. Hotwiring is also a skill option.

Players can replace spare parts, tyres, suspension, brakes and more – all of which can be damaged by situations such as overuse, off-road driving and collisions.

Vehicles must be topped up with gas, have charged batteries and each variety of vehicle has its own set of replacement parts for players to add to their chosen transport.

To accompany vehicles a Mechanic profession and skill have also been added to the game – allowing for increased chances of successful part installation, and trickier repairs.

PLEASE NOTE: Due to the massive engine and gameplay changes required for vehicles, game saves from the previous build 38.30 are NOT compatible. If you want to continue your game a Steam beta channel for the previous Build 38.30 has been provided.

PLEASE ALSO NOTE: While we’ve taken a lot of effort to get this build as bug free as possible, due to these huge changes to the PZ engine we can anticipate many bug reports, and also the potential of operational issues on computer set-ups that weren’t part of our IWBUMS beta process. Please report any issues here, and thank you for patience.

For the full changelist, and information on about a million other fixes and tweaks, please visit the Build 39 release thread.

While vehicles have been a massive group effort from a lot of people within the team, we’d like to give a special thank you to EasyPickins, who did a lot of the technological framework and put a lot of sweat and blood into the system for a long time before everyone else got involved. We’d also like to thank General Arcade, and especially Yuri, for his invaluable help in their integration and evolution.