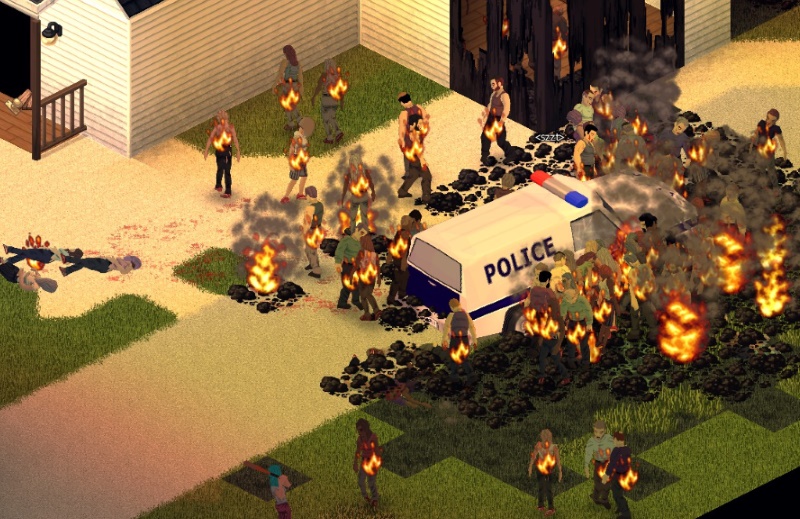 The Build 39 Vehicles build (playable in public IWBUMS beta) is essentially ready to go, but we need to be sure that a couple of issues have been solved by today’s release of Build 39.57: one that saw crowds of zombies pinging vehicles off roads in MP, and another on some dedicated servers that had zeds attracted to a vehicle’s previous position that we also think was to do with the physics interpolation. [So please let us know if you encounter either!]

39.57 also improves the way vehicles are arranged in parking stalls by adding directional pointers to the mix, addresses issues with watch alarms, adds extra options to help you tailor/toggle world degradation (erosion) in the game and some tweaks to help modders with the change to the vehicles build. Amidst a lot of under the hood stuff to keep stuff ticking over. EDIT: A complete changelist will appear here in the next day or so, but due to last minute issue with the latest code we’ve released a build that was already in testing and thus we’ll have to recompile the changelist to suit.

In the mean-time let’s go round the houses and find out what other PZ types are up to:

Last week we announced that we’d teamed up with a gang of renegade coders called The Eccentric Ape – ably led by our current anims-focussed Technical Director whizz (Bitbaboon) Mark. This past week has seen them getting up to speed with PZ, and right now they’re getting their hands dirty in the codebase. The plan is for them to do a big push on the animation system, and overall intention is that we’ll be working alongside them on many of our big features going forward.

So, for the next little while TEA’s Grant is fixing up remaining issues with layer/node and blending code, and then adding in the common state conditions that animations will ‘trigger’ – stuff like collision being on/off for combat and swings. Snitz, meanwhile, is setting to work on movement, idle and swing states to remove anything still hard coded and tie them instead to the new in-game variables.

Finally, Zac and Gaz are working on AnimZed, making it more user friendly, filtering and sorting the anims into the first set of released animations and focussing on it from the end user perspective. By the time this push is complete the system should be in a state where Animator Martin, and ultimately modders, can dive in and start layering new anims for the remaining states with very little required coder intervention.

Turbo’s big challenge at the moment with the new precipitation and fog that go hand in hand with his simulated climate system is how to handle it when you look out of windows – in the current game rain isn’t visible outside, and this bug will become much clearer with better rain and fog effects. Particles currently get drawn after the world has been drawn, and the weather is drawn over this final image – so we need a solution for this so you can check the weather outside your safehouse without walking out into it.

We anticipate that looking out of a window when hearing the noise of, for an example, an approaching thunderstorm (thunderclaps at the correct timing, taking into account to your distance away on the map from lightning and the centre of the storm) will be a much more common occurrence with this new system – likewise with checking out the fog. As such it’s something we need to fix up before release.

While he puzzles this all out alongside our other coders, Turbs is also creating a new sound bank for ambient sounds to signal seasonal change. He’s currently got a supply of forest zone sounds, insect noise, rain effects for both indoors and outdoors, extra SFX for heavy weather, birdsong and indoor/outdoor wind effects.

He intends to have it so that, for example, on a hot summer afternoon with little to no wind you can hear the crickets chirping – and for birds to become silent when heavy weather hits. It’s intended to be soft background noise, but if implemented well should really improve your sense of the time of year – and the current weather state created by the simulated climate system. After a meeting with the PZ art brigade Turbo is also going to add some more direction to his ‘clouds overhead’ effect, as currently they look a little too smoke-like.

Bitbaboon Steve is finishing off our updated internal build system, while Connall is investigating ways to help our community translators keep up to date with translation strings that are updated from build to build. Mash continues with Louisville, while RingoD is building a wider roster of house and apartment buildings that she can drop into residential areas when she moves into the suburbs.

When they return from Russian Victory Day vacations General Arcade’s Yuri is working on MP network physics, and Stas continues his work to improve gamepad and mouse settings/bindings. ChrisW is also back with us and will work on giving final polish to his existing rooftop occlusion system when it comes to player-built structures, before returning to his work on Sims-style interior cutaways in houses.

Due to a necessary forum upgrade we’re also having to decommission our current Bug Tracker, which is annoying but has to be done unfortunately. We’ve harvested all the longstanding issues that were present in it, so if you see any of your reports disappearing – please don’t worry as they have a new home in our internal system. We’ll work on getting a decent replacement in the weeks ahead.

This week’s 911 call out from Ghost. A general list of stuff added to PZ, and vids of features being worked on, is kept here – so you don’t have to plough through endless dev blogs for info. The Centralized Block of Italicised Text would like to direct your attention to the PZ Wiki should you feel like editing or amending something, and the PZ Mailing List that can send blogs like this and patch notes direct to your mailbox. We also live on Twitter right here! Our Discord is open for chat and hijinks too. The CBOIT would like to apologise to Mark for calling T.E.A. ‘The Educated Ape’ last week instead of ‘Eccentric’, although that would also have been a good name for his new company.