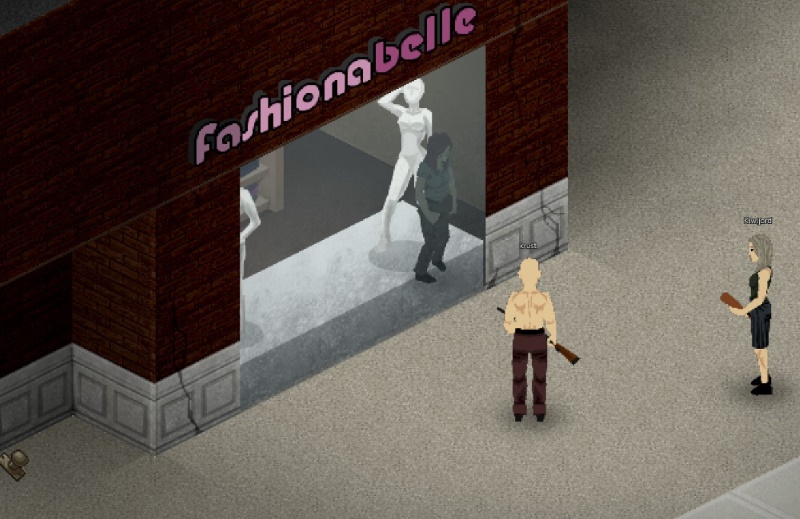 Hey all. IWBUMS-centric Thursdoid this week due to the release last week, but elsewhere Mark and the guys at TEA continue their work for future PZ versions. With that in mind, then…

What with the release of Build 40 onto the wider IWBUMS beta last week, this Thursday we reopening the TIS-curated Spiffospace server for general testing and Community Megatest events.

This server, based in France, has no password and can be found by anyone running the beta (access details here). For server-related feedback and to keep tabs on what’s happening please use this thread.

We especially need feedback on the new chatbox and chat functionalities, any player-side oddness you notice while our admins play around with their new spawn systems and fixed-up safehouses, and (most importantly) feedback on any operational differences from the stable Build 39 version if you’re logging in from a distance.

We’ve been seeing some great feedback from people who’ve tried out our storms, snow and fog – and have now just released IWBUMS beta version 40.11. This is primarily a tidy-up version that updates our FMOD sound engine and also removes some installation clutter in readiness for the new build system that Bitbaboon Steve has been making for us behind the scenes.

This version also contains EP’s rewritten C++ version of ZombiePopulationManager system. This governs the placement and movement of zombies when they’re not on-screen, and should be an optimization for SP and MP – hopefully helping out lower spec machines and busy servers.

Elsewhere this version should fix up some MP connection issues players have reported, polished the repositioned main menu and tackled a few problems related to the new driving traits.

As seen above, it’s something of a rudimentary ‘background stuff’ IWBUMS that’s away from direct view – but we already have a few cool things in the can for implementation next week.

First off Yuri’s reflective car windows are going into the test build tomorrow, while Turbo is also reworking the player temperature functions that have come in with the weather build to make it more appropriate and take into account player exertion/activity, nearby sources of heat like campfires and the more general health implications of hot/cold. There are also some bugs caused by different day lengths that once addressed could fix up some of the strange temperatures being reported at different times of day.

Another feature that should make it into the next IWBUMS build, or at least an early version of it, is a new approach to how the PZ map’s electricity supply is managed.

The PZ bug repository has plenty of entries that deal with fridges, freezers and generators – often caused by the fact that it’s all coded around the game checking to see if the power has been turned off globally whenever food is looked at and the game updates. There is no global ‘power network’ beyond the on/off toggle that occurs when your game decides to cut the electrics – and the electricity shutdown has always been something that’s needed some polish in-game.

EP, then, is currently improving this and making it so that the power falters more realistically – letting power be on/off in different towns instead of everywhere at once, and having the game log all power on/off events (both map-wide, and with individual generators) so we can finally eliminate some of the weirdness that surrounds food rotting and/or staying fresh when it’s slipped the net via a generator running out of gas, or a fridge that’s been hooked to a generator after the electric shut-down without being opened.

The bigger picture of this, however, is more interesting. By marking out different ‘Power Zones’ in the WorldEd mapping tool then we (and modders, and server admins) can cut the power to different areas of the map – and of course restore it.

It opens the door to making the power shutdown ‘event’ more organic (and initially explicable) through short-term and localised blackouts, and also have different areas and blocks within the same town or city lose/regain power while the power network fails. While we put this into the game, we will also consider stuff like lights flickering and suitable sound effects to better explain exactly what’s going on to new players.

This week’s mannequin zed from Krust. A general list of stuff added to PZ, and vids of features being worked on, is kept here – so you don’t have to plough through endless dev blogs for info. The Centralized Block of Italicised Text would like to direct your attention to the PZ Wiki should you feel like editing or amending something, and the PZ Mailing List that can send blogs like this and patch notes direct to your mailbox. We also live on Twitter right here! Our Discord is open for chat and hijinks too.