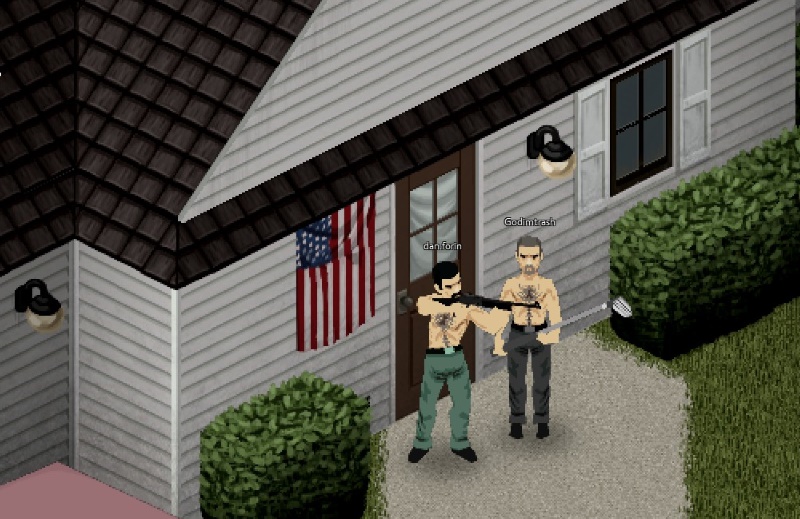 We’ve just released IWBUMS beta 40.14, which is another release that’s primarily fix and polish – our current aim for the devs working on this build being to make lots of quality of life corrections and adjustments while Turbo finishes his weather/climate work and the version can get a full public release. You can see the patch notes here.

To this end this version fixes missing raindrops, absent MP storms and other climate errors – while EP has also figured out the annoying sound volume and delayed sound issues, which should now be eradicated. The telepathic ‘terminator’ zeds trailing after players in MP that several of our IWBUMS testers have reported have also been stripped of their powers.

EP has also made improvements to alleviate longstanding woes with zombies appearing in your vision cone all-too-late in large buildings like the Mall, and Yuri has made fuel caps more accessible through his vehicle anti-clipping force-field.

EP has also been through all the various vehicle features and made them operate as you’d expect when the car battery is dead or uninstalled, also having them still operational until the car is powered down when the battery is removed and the engine is going. Another minor, but irritating and ancient, bug he’s figured out is the frozen food that’s been spawning in freezers long after the final power outage.

Please be aware that SpiffoSpace remains open for IWBUMS testing. This server, based in France, has no password and can be found by anyone running the beta (access details here). Once we’ve added in some admin power over weather (admin-triggered storm/snow/fog etc) we will be coordinating a Community Megatest on here.

Due for internal testing over the weekend and early next week, Turbo has redone the way the IWBUMS beta currently has changes in temperature, and resistance to hot and cold, impact on the player. Although it works okay-ish currently, the edges were too rough – and deaths were often broken/cheap.

His revamped system focuses on how resistance to the elements is calculated – and the way it takes hunger, thirst, worn clothing, wetness and exercise all into account should be a marked improvement. The temperature ‘safe zone’ range will be wider too, and the system takes ‘real time’ minutes into account rather than ‘game time’ – so fast forward peril is decreased, alongside being dead by dawn next to the embers of a camp fire.

The next version will also improve weather visuals to better distinguish rain from snow, and add in temperature conversions – so our Kentucky setting gets its proper and correct Fahrenheit readings, rather than horrid old European centigrade.

While the four guys over at T.E.A. continue to work on our new animations system, we thought it might be worthwhile mentioning the fifth horseman of that build: our music composer Zach Beever.

Since animations are such a fundamental evolution of the game, we want a whole bunch of new music to bring players along emotionally with the new visuals. Zach’s been working with us for months now, preparing a whole host of new tracks, many including familiar themes and motifs from old favourites.

Rather than drip them in one by one, and to give him time to work on them as a collective whole, we felt their impact would be far greater if they all went in together. To this end, behind the scenes, Zach has now completed 19 new music tracks, with more to come – and a part of one of the latest can be heard below.

For thoughts on his direction and inspiration for the music, we thought we’d ask the man himself.

“When I began work on the soundtrack some years ago, part of the overall vision was to incorporate instruments that were totally removed from the Kentucky setting. The thinking was to mirror the massive shift in the world—that whole zombie thing—with an equally big change in the (expected) music. What could have possibly been played by the banjo and fiddle, for example, went to the tar and duduk.”

“Recently, though, the team brought up a player’s suggestion to reexamine this and tie in aspects of the local music. This took some thought and a good bit of experimentation, as I didn’t want to upset the identity we had created for Zomboid.”

“The result is a new set of tracks that, I believe, expand on the old ones faithfully—the mood is still there, but now we’ve got American-style sounds mixing with the more middle-eastern sounding ones. When everything’s heard together, I hope the occasional appearance of these instruments (and their distinct playing styles) hints at the past world.”

Behind the scenes there’s currently a lot of conversation about revamps of existing systems (farming, last week’s thoughts on polishing the power outage etc) but something else we’re discussing are ‘survival-style’ skill and recipe-based enhancements to vehicles. To which end, we thought we’d float this image of our potential direction with this in front of the community – to gauge opinion and gather some feedback.

Please note that this is NOT a final representation – it requires a full art pass, not to mention a lot of coding work that will likely come from General Arcade’s Yuri for a future build. It does, however, show how a modular model system could work – and we’d like your thoughts on it.

It’s currently the Annual Penisham Celebration on our forums. Feel free to join in, but be aware that Penisham will only be available for another five days.

This week’s patriotism from GodImtrash . A general list of stuff added to PZ, and vids of features being worked on, is kept here – so you don’t have to plough through endless dev blogs for info. The Centralized Block of Italicised Text would like to direct your attention to the PZ Wiki should you feel like editing or amending something, and the PZ Mailing List that can send blogs like this and patch notes direct to your mailbox. We also live on Twitter right here! Our Discord is open for chat and hijinks too. And did you ever wonder how the Knox Event played out in the UK, well wonder no more…