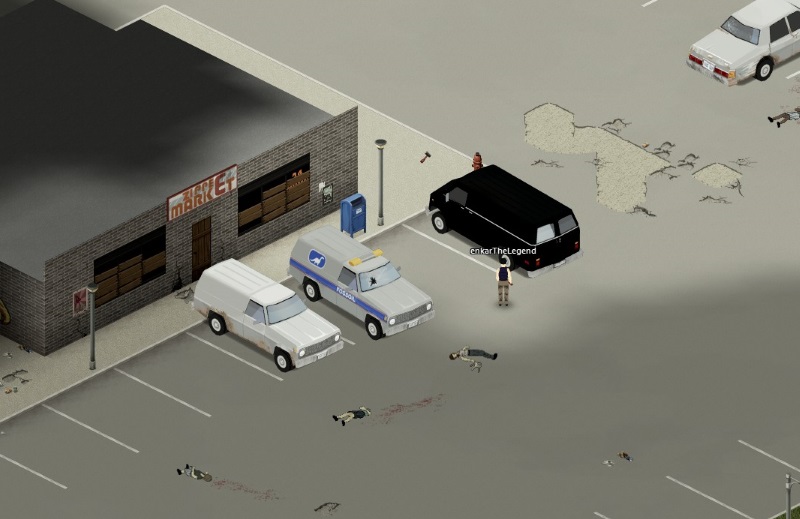 Hi everyone, let’s go for a quick round-the-houses on what’s happening in some key areas of the Build 41 internal animations build.

You’re probably bored of us saying this every week but, just for anyone who isn’t up to date on their Thursdoids, before we can go into the public IWBUMS beta stage we need to have our rotational animation system in, some optimization on zed crowds done and MP hooked up to all the new framework.

We also, clearly, need to bang any other gribblies on the head that crawl out of the woodwork in the process – like, as happened today, a slight rethink on how we’re doing our clothing layering in AnimZed to avoid a lot of clipping issues that’ve been piling up recently.

With that in mind, then, let’s first visit Zac with whom much of the initial integration of the above tends to lie.

“The problem is that this gives the character a very robotic feel. Most of us don’t run as though we’re on wheels.It’s okay to play with, but is especially grating when you’re inside a building.”

“So: a better way would be to add some more realistic twist and turn behaviour. For example, rather than slowly rotating 180 degrees, the character should jump, stop, and bounce backwards.”

“This can be done by leveraging the animation system. We can add animations for running while rotating left/right and the character will have a distinct tilt as they lean into the turns. Then, if they are to completely change direction, we can add an animation that the character can use to stop, twist, and run off in the opposite direction.”

“I’m currently working on the mechanism that will read the character’s intended direction of travel, and translates that into the desired blend of animations that will get them there. Hopefully we can get some good visuals of it in-game to share you with you all as soon as it’s operational.”

Let’s have a quick look at a nice (very WIP) of RJ’s current reloading work, before we track down the legendary Frenchman himself.

“In the current version of PZ, the code that makes up the reloading system is huge. It became a problem for both ourselves and modders to make changes.”

“As such my new reloading code is implemented in a single timed action lua file, which is driven by the animation – so its sounds are tied to the animation itself when it’s finished. Also, seeing as you can judge the speed yourself in the animation, this means that there’s no longer a timed action progress bar above your survivor.”

“Although currently done via menus in the video, the system should work basically the same as before: press R to insert or eject magazine, X to remove bullets or unjam the gun. Here’s a few examples of some new stuff that’s currently in the internal test build:

(It should be noted that, while guns themselves are getting this love in Build 41, the rudiments of PZ shooting and aiming are going to be improved in Build 42 alongside work on hunting. This isn’t the end of gun improvements in PZ and, though much improved and with the optional targeting outline we’ve showed off in previous Thursdoids, we would still consider the overall gun systems imperfect.)

Now, over to a polite Scottish gentleman with an important mission.

“We are looking for people who would be willing to look over the current state of community translations for Project Zomboid especially for Chinese, Korean, Italian and Norwegian as it has been some time since they were last updated.”

“We are always interested in anyone who speaks another language who might be willing to volunteer some of their time to help translate the game or even just to help point out issues that can be attended to when other translators offer their assistance.”

“Information is available here on how you can begin contributing. Feel free to leave any questions or comments in that thread, and I’m also always monitoring the #translation discord channel should you prefer to talk on there. Thanks!”

This week’s forlorn Zippee Market from enkarTheLegend. A general list of stuff added to PZ, and vids of features being worked on, is kept here – so you don’t have to plough through endless dev blogs for info. The Centralized Block of Italicised Text would like to direct your attention to the PZ Wiki should you feel like editing or amending something, and the PZ Mailing List that can send blogs like this and patch notes direct to your mailbox. We also live on Twitter right here! Our Discord is open for chat and hijinks too!