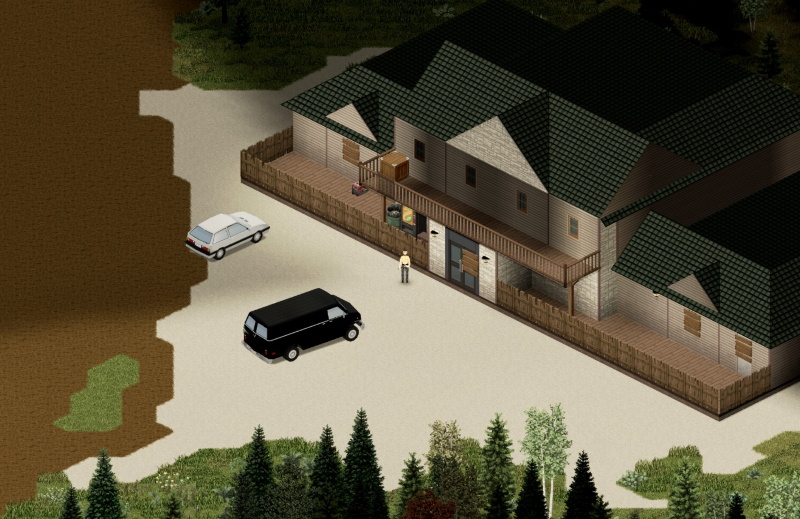 Hello, here’s a latest compilation vid of recent PZ work! It shows the main stuff that’s gone in recently, alongside some handy subtitles to describe what’s what. More in-depth details then follow on below…

So without much further ado…

While Zac continues to work on the rotational animation system that we’d like finalized and implemented before an IWBUMS release, this week the following has gone into the internal dev build.

In the last two versions we always had a problem with clipping when it came to characters and zeds standing close to vehicles – now though EP has worked out a way to render vehicle models into the scene the same as character models, thanks to the OpenGL depth buffer.  So the top of the player won’t get cut off in certain orientations, running over zeds looks better and the ‘invisible forcefield’ we had around cars isn’t so necessary.

We’ve started to finalise the character creation screen – working on what’s automatically unlocked for different professions, making the randomize button work, choosing what you can wear from the get-go – and what will be found out on the game map etc.

Now when attacked, clothing on both human survivors and zeds will show damage – making that body part more vulnerable on the next attack. So if you are wearing a fireman’s jacket and it takes a bite then it will get a hole in it – and the next hit on your torso will have to take into account the protection of what you’re wearing beneath it. A full helmet might protect the neck, meanwhile, but will slow combat speed – and potentially restrict vision.

In terms of the clothing, though, the overall condition now lowers every time you get a hole is bitten or ripped into it – meaning that eventually clothing can be torn apart and destroyed.

This follows into the clothing on zeds when you hit them too – right now it’s basic slash/hole marks on clothes, but in future versions this could easily be shown as deep wounds and bruises.

Yuri’s work to bind the save system to a server-side database has been merged into the main test build after a successful bout of testing – this means no more lost cars via irl power outages and unconventional game exits.

ChrisW is partway through his work on making his cool cutaways work with homes and extensions created by players. We’re so excited about this that we’ve sourced both screens and a video about it – though please consider it WIP as Chris is still deep inside the code.

This week’s under construction forest fortress from Grumpy. A general list of stuff added to PZ, and vids of features being worked on, is kept here – so you don’t have to plough through endless dev blogs for info. The Centralized Block of Italicised Text would like to direct your attention to the PZ Wiki should you feel like editing or amending something, and the PZ Mailing List that can send blogs like this and patch notes direct to your mailbox. We also live on Twitter right here! Our Discord is open for chat and hijinks too!