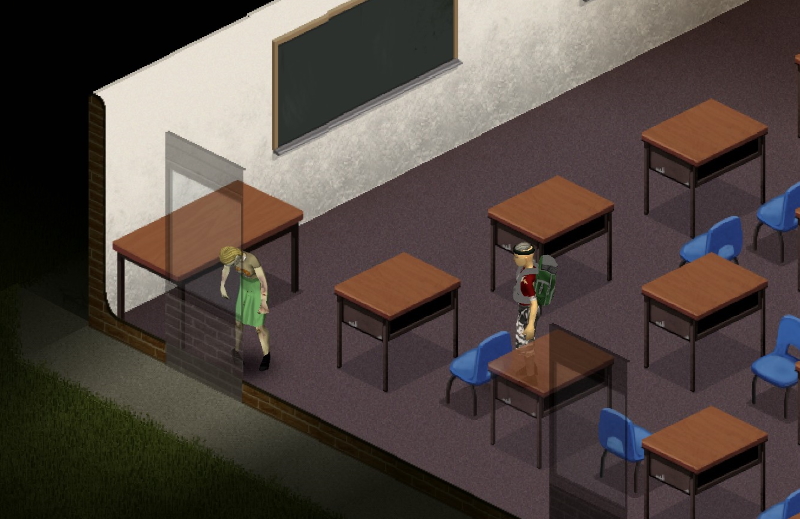 Hey all, last week we released IWBUMS public beta 41.34 – so this week we’ll be looking at some of the stuff that’ll be going into 41.35, while elsewhere Andrei from General Arcade joins in with the effort to bring the MP online. So what will be featured next?

Bags! These are going to take some effort to look 100% right with all bags at all player speeds, we didn’t initially think it would be possible without a bunch of extra tech, but RJ and Martin have been going great guns this week to make it all look good.

Next up, we also have the addition of make-up that can be added to your character’s appearance if you find it in-game – though when released you’ll need to have access to a mirror to apply it. We’re fairly zoomed out in PZ, it’s true, but this was an easy and fun thing for RJ to have as a side project – and hopefully will be great for RP purposes too.

Also on the list for 41.35 are darker nights to encourage flashlight use, and an increased likelihood of car damage if you’re one of those cheeky scamps who do things like reverse slowly over hundreds of zombies to kill them all.

We’ll, most likely, be releasing 41.35 next week to the IWBUMS beta.

After some investigations from BitBaboon Steve, he concluded that we’re using way too much texture memory for the vehicles currently. The need for damage and rust layers that are unique per car has lead to a bloat in texture memory usage and at present all these textures are loaded in at game load time.

We plan to look into streaming these textures in when required, but are also working on a more general fix.

MarkW, a 3d modeller and friend of TIS, is doing a pass of all the vehicles in the game, adding a second UV channel that will allow us to map a single reusable generic rust and damage onto cars, which will cut down on the amount of unique textures dramatically.

It’ll probably require some work from modders to get their own cars working, but we’ll try and provide details on how to do this prior to release.

These fixes should hopefully help those who still have issues running build 41 due to GPUs with limited memory. Plus, into the bargain, we’re looking into adding an additional blood overlay to allow your ride to get painted red when mowing over zombies.

In this video you can see how the process of fire spreading is calculated.
At 3:08 Yuri shows where the character is on the map, after which he shows a map of combustible materials is set up for an area far, far away – and unloaded in his character’s game. After this he turns up the heat energy in the distant unloaded area, and fire begins to spread out. When the character is then teleported from a great distance the fire, and how far it has spread, is seen in-game.

Here also is a Yuri’s latest combustion debug map. This displays the temperature of the materials on the tile in color, while the amount of unburnt material on each tile can also be seen on each red burning square.

This week’s uncancelled school day from Colic2005. A general list of stuff added to PZ, and vids of features being worked on, is kept here – so you don’t have to plough through endless dev blogs for info. The Centralized Block of Italicised Text would like to direct your attention to the PZ Wiki should you feel like editing or amending something, and the PZ Mailing List that can send blogs like this and patch notes direct to your mailbox. We also live on Twitter right here! Our Discord is open for chat and hijinks too!