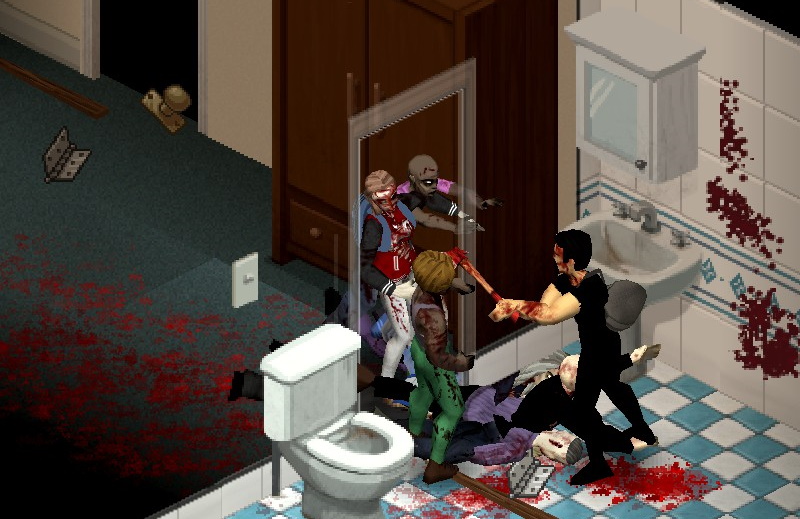 Evening all, here’s some gameplay nuggets for the Build 41 beta that managed to escape quarantine.

The next IWBUMS beta patch *should* be out early next week, with the caveat that the addition of visible player-carried bags has introduced lots of new bugs and gameplay considerations to the mix which RJ has been addressing one-by-one on the internal test build. Here’s a few examples of some of the bags that’ll be on-show.

Something else, meanwhile, that’s been added recently is the visible build-up of dirt, mud and grime on clothing while you play – and especially if you walk through trees or fall over a lot. It works a lot like the blood system really, only browner.

In a separate branch Zac and new recruit Andrei, one of General Arcade’s boys, are already striking up a good rapport as they section off different aspects of the required work for them to continue ploughing through.

If it means anything to you (it means little to the blog writer) Andrei says he “is currently work on passing ActionStateName and game variables via ZombiePacket”.

Meanwhile, Zac says he’s “getting an AnimState/ActionState name table going. That way, we can truncate the name strings to byte/short indices. Once Andrei has the ActionStateName transmitting, these two should slot together nicely.”

The blog writer will take Zac’s word for it, and will also endeavour to get a more technically-minded blog written in a future week as I know some of you like it when Zac gets his Maths out and we have some graphs.

We currently have TIS friend “Rockstar Mark” (so-called as he used to work there and not because he’s on tour) is doing a pass on all the game’s vehicles. He is adding a second UV channel to each that will allow the use of a single reusable generic rust and damage maps.

This will in turn cut down on the amount of unique textures dramatically – and decrease a whole bunch of the memory bloat that Bitbaboon spotlit during his regular Friday optimization spelunking. This also means that we can spend a small proportion of that saving to add vehicle blood maps.

Yuri continues to work on his new fire spread system. The game can now how have a global, game mode or server-defined limit on how many tiles can be burning on the map – so we/admins can have some control over fire and not burn down the whole map by accident.

Yuri’s system also now uses the direction and speed of the wind, while in-game rain now helps with fires being put out. All this can be seen in the following video that Yuri has lovingly put together.

We know that folks often like to see the random/terrifying animation bugs that occasionally crop up on 41 while we work on it. So here’s one for anyone who fancies doing an Attack on Titan mod one day…

This week’s bathroom jocks from ☆.::Sam_Sparkman::.☆. A general list of stuff added to PZ, and vids of features being worked on, is kept here – so you don’t have to plough through endless dev blogs for info. The Centralized Block of Italicised Text would like to direct your attention to the PZ Wiki should you feel like editing or amending something, and the PZ Mailing List that can send blogs like this and patch notes direct to your mailbox. We also live on Twitter right here! Our Discord is open for chat and hijinks too! Sorry if there are typos in this week’s blog but the baby has been crying for hours and I’m tired oh so tired.