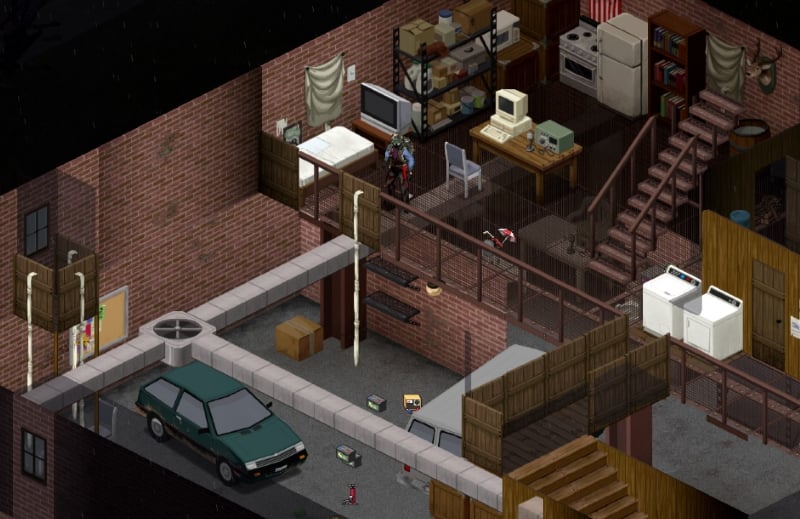 Hey all, hope everyone is well on this sunshine-y pandemic day. A few ‘where we’re at’s on Build 41 will now follow.

There won’t be a patch for the beta for another week or so, as the main body of work on it is an upgrade/extension for our current tutorial that Will, RJ and newly TIS branded mapper Xeonyx are currently working on.

In future we will most likely look to other avenues for explaining and tutorialising the game, but for the time-being we need the current tutorial expanded to cover aspects like stealth, sprinting and the weaponry hotbar – and indeed for a multitude of bugs and breakages to be removed from the existing framework, and for it to work with gamepads.

While not very dazzling or sexy to you our existing players, we also hope we’re making it entertaining enough (and have enough little secrets in it) for experienced survivors to have 15 minutes of fun with it too.

Elsewhere for 41.38, while the tutorial update is being worked on, EP has been on something of a bugfix overdrive while Martin has tweaked the female mesh and skin weights to improve the posing of lady survivors and differentiate them a little from the men.

Zac and Martin have also together tracked down a strange pause in some links/chains of animations (most notably in spears, which was where the trail began) and we suspect that a forthcoming fix for this may well improve a bunch of anims flow game-wide. It’s seen here in super slo-mo.

Other fixes and improvements recently committed for the next patch include less buggy tripped sprinter zeds, unfixable firearms, invisible salad, the inability to climb over short fence doors while holding E, log walls that can now use the cutaway system and various other things.

Right now we primarily want to fix and polish what’s in 41 rather than introduce any complex new stuff – so as not to add extra complication or disrupt combat while the MP Strike Team does their thing.

We started the week with a big meeting between Grand MP Overseer Bitbaboon Mark and the rest of the Strike Force – as Yuri has been moved over from working on finishing the new fire system to the MP Strike Force and needed to be brought up to speed on plans.

Since then he and Andrei have sparked up a fruitful working relationship and have been sharing videos and info from their work on client-side data interpolation (predicting and interpolating the coordinates and rotation of zombies on your PC rather than the server itself) with the wider team.

With this interface Andrei and Yuri can see that their predictions work well when the zombie goes in a straight line – the zombie is always in front of its last known position on the server (blue circle). With the current implementation, however, when the direction of movement of the zombies change then the predictions becomes out of whack. This, then, is going to be a focus of their work next week.

Okay, we hesitate to show this again as it’s a coder side project that’s away from our other mainline features (and certainly not anywhere near ready enough for nearby version currently) but Turbo’s latest work on the top of his ongoing Devices project is looking pretty fun.

It’s been a relatively dry blog this week, so please have this by way of apology.

This week’s creative use of sheet ropes from Jimmi Mongoose. A changelist of all IWBUMS patches since the 41 beta was released can be found here. A general list of stuff added to PZ, and vids of features being worked on, is kept here – so you don’t have to plough through endless dev blogs for info. The Centralized Block of Italicised Text would like to direct your attention to the PZ Wiki should you feel like editing or amending something, and the PZ Mailing List that can send blogs like this and patch notes direct to your mailbox. We also live on Twitter right here! Our Discord is open for chat and hijinks too!